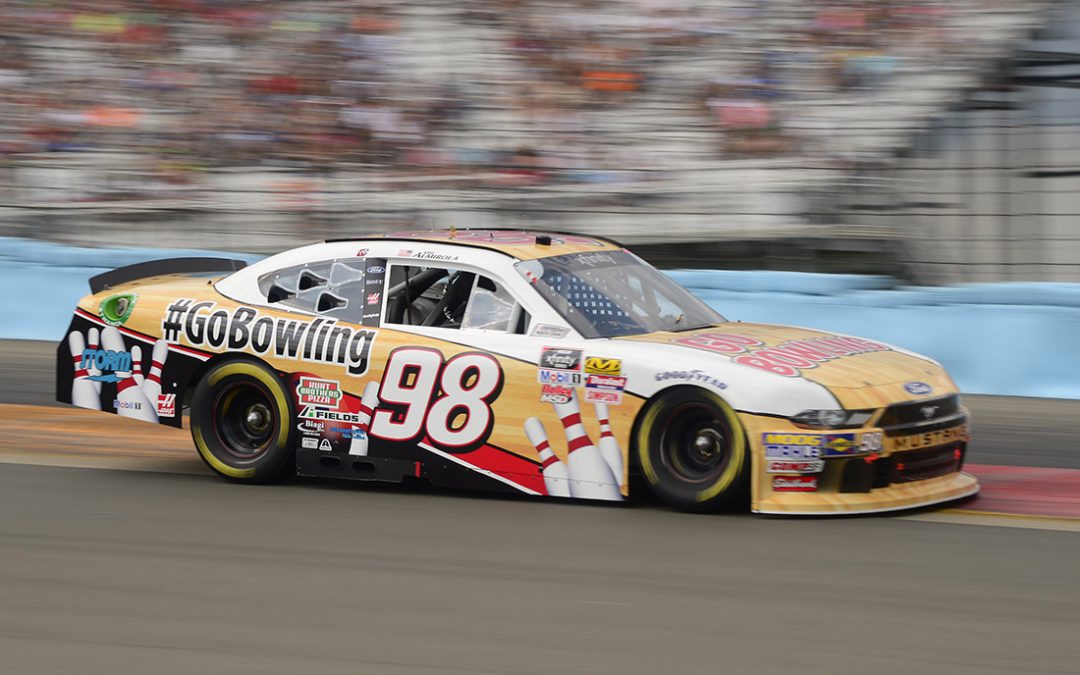 Stage 1 Recap (Laps 1-20):
● Aric Almirola started ninth and finished 21st.
● The first caution of the race was displayed on lap five and the Tampa, Florida, native reported that his No. 98 Ford Mustang was loose. Crew chief Richard Boswell made the call for Almirola to stay out on the track.
● Almirola pitted just before the conclusion of the stage for fuel, four tires and adjustments to improve the No. 98 Go Bowling Mustang’s handling.

Stage 2 Recap (Laps 21-40):
● The Ford driver began Stage 2 from the third spot and ended it in 18th.
● When the third caution of the race came out on lap 28, NASCAR mandated wet conditions due to a passing rain shower and Almirola came down pit road to change from slick tires to rain tires.
● During the pit-road service NASCAR determined Almirola had too many crewmembers in contact with the pit service area and the Go Bowling driver had to restart at the tail end of the field on lap 32.
● On lap 37, Almirola pitted under caution from 19th to receive four slick tires and had to restart 25th after a pit-road violation for driving through too many pit stalls.

Final Stage Recap (Laps 41-82):
● Almirola started the final stage in the eighth.
● On lap 52 Almirola pitted for fuel only to allow him to stay out on the track until the end of the race.
● Once pit stops cycled through, Almirola was in the fifth position.
● He eventually made it up to the fourth position, but ultimately finished in the fifth spot.

Notes:
● This marks Almirola’s second NASCAR Xfinity Series start at Watkins Glen (N.Y.) International and 102nd career Xfinity start.
● Almirola qualified and scored his best Xfinity Series finish at The Glen.
●Seven cautions slowed the race for 20 laps.
●Only 23 of the 40 drivers finished on the lead lap.
●Joey Logano won the Zippo 200 at The Glen to score his 30th career Xfinity Series victory, second of the season and third at Watkins Glen. His margin of victory over second-place AJ Allmendinger was 3.362 seconds.

Aric Almirola, driver of the No. 98 Go Bowling Ford for Stewart-Haas Racing with Biagi-DenBeste:

“It was a solid day for us for our Go Bowling Ford Mustang. We had to go to the back and to the front a couple of times, but we had a solid car. We didn’t have anything for the leaders. The 12 and 22 were lights-out and we were racing for third or fourth, but all in all it was a good day. We just didn’t have what we needed to go up there and compete for the win, but it was fun. I had a lot of fun and I feel like I learned a lot to get ready for the race tomorrow.”

The next event on the NASCAR Xfinity Series schedule is the Mid-Ohio Challenge on Saturday, August 11 at Mid-Ohio Sports Car Course. The race starts at 3 p.m. EDT with live coverage provided by NBCSN.