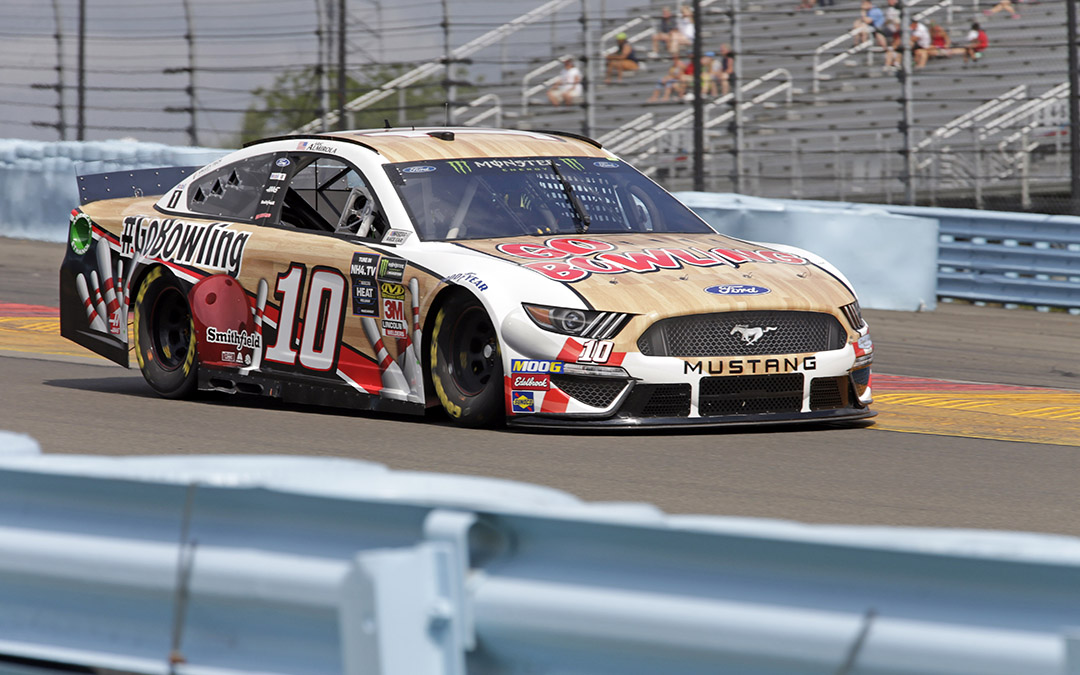 Stage 1 Recap (Laps 1-20):
● Aric Almirola started ninth and finished 10th, earning one bonus point.
● The No. 10 Go Bowling Ford Mustang driver raced inside the top-10 until reporting an issue with his shifter.
●The Go Bowling team worked tirelessly to devise a plan that would keep the No. 10 Ford in the race while Almirola held 11th place.
● Almirola was able to hold his position and even gained a spot to finish the stage inside the top-10.
● At the end of the stage Almirola decided that tape would fix his shifter issue, so he pitted for four tires, fuel, adjustments and tape.

Stage 2 Recap (Laps 21-40):
● Almirola started 17th and finished 11th.
● Almirola gained two spots in the opening laps of Stage 2.
● By lap 30 he was scored in the 13th position. Three laps later the caution was called.
● He restarted 12th and gained another spot before the stage concluded.
● Almirola and the Ford team decided not to pit at the end of the stage.

Final Stage Recap (Laps 41-90):
● Started 10th and finished 12th.
● The No. 10 Ford driver noted loose-handling conditions at the beginning of the stage.
● Almirola pitted on lap 59 for four tires, fuel and adjustments under green.
● The caution was called on lap 62. Almirola was 17th before the caution and ended up 10th after it as pit stops cycled through.
● Almirola raced the Go Bowling Ford just outside the top-10 to record his best finish at Watkins Glen.

● Almirola’s 12th-place result in the Go Bowling at The Glen bettered his previous best finish at Watkins Glen – 16th in 2015.
● This is Almirola’s fifth straight top-15. He finished 12th in the series’ previous race at Pocono.
● Chase Elliott won the Go Bowling at The Glen to score his fifth career Monster Energy NASCAR Cup Series victory, his second of the season and his second straight at Watkins Glen. His margin of victory over second-place Martin Truex Jr. was .454 of a second.
● There were four caution periods for a total of 13 laps.
● Twenty-nine of the 37 drivers in the Go Bowling at The Glen finished on the lead lap.
● Kyle Busch leaves Watkins Glen as the new championship leader with a 13-point advantage over second-place Joey Logano.

Aric Almirola, Driver of the No. 10 Go Bowling Ford Mustang:
“Overall, it was a good day for me at a road course. The guys brought me a good Go Bowling Ford and I learned some things. It’s always good to see improvement at places like Watkins Glen.”

The next event on the Monster Energy NASCAR Cup Series schedule is the Consumers Energy 400 on Sunday, Aug. 11 at Michigan International Speedway in Brooklyn. The race starts at 3 p.m. EDT with live coverage provided by NBCSN and SiriusXM NASCAR Radio.