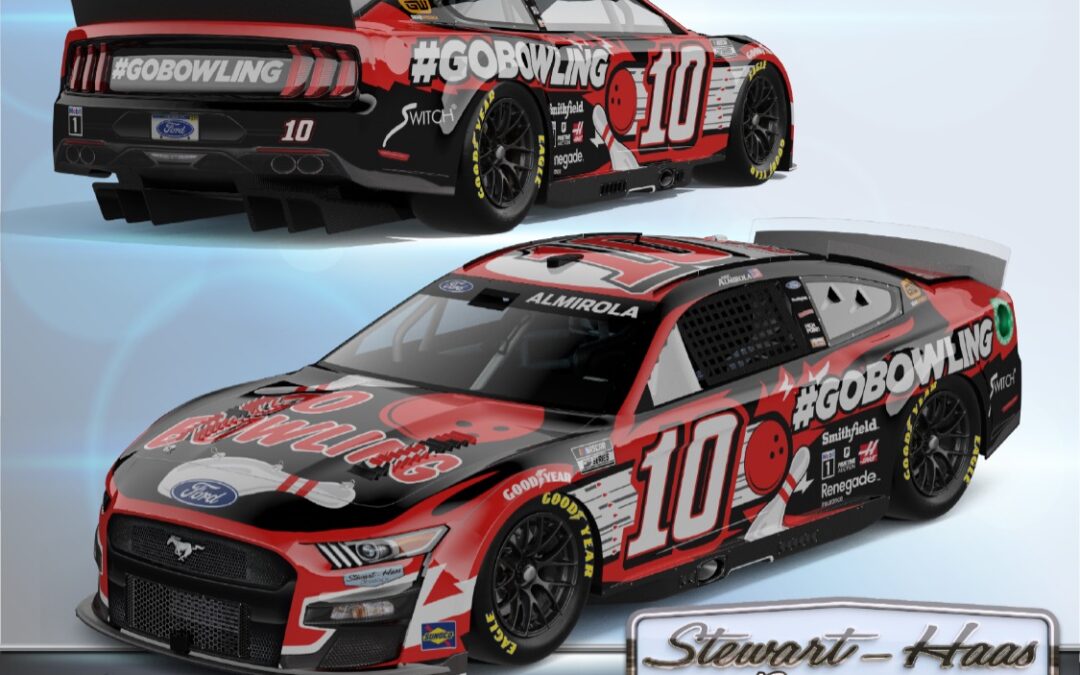 Notes of Interest:
● Go Bowling, Stewart-Haas Racing, and Aric Almirola have teamed up yet again to present one of the largest bowling activations of the year – at one of the largest motorsports events of the year. Almirola will pilot a never-before-seen Go Bowling paint scheme on his No. 10 Ford Mustang and race for the win in the Go Bowling at The Glen at Watkins Glen (N.Y.) International on Sunday, August 21. While Almirola’s partnership with Go Bowling dates back to 2013, the partnership at Stewart-Haas Racing is stronger than ever with new activations and strategic campaigns to continue to drive NASCAR fans and bowlers to the No. 1 participatory sport in the world.
● Watkins Glen Stats: In 10 NASCAR Cup Series starts at Watkins Glen, Almirola has five top-20 finishes with a best of 12th in the 2019 race. He has also competed in two NASCAR Xfinity Series races there with a best finish of fifth in the 2018 race while driving the No. 98 Go Bowling Ford. He also finished eighth in the 2011 Xfinity Series race.
● Driver Points: Almirola arrives at Watkins Glen 16th in the driver standings with 552 points, 330 out of first.
● Playoff Points: The No. 10 Ford driver sits 18th in the playoff standings, 214 points behind the top-16 cut line. With just two races remaining in the regular season, Almirola and the No. 10 team’s only path to the playoffs is by race win.
● Almirola’s career: In 412 NASCAR Cup Series starts, Almirola has earned three wins, 28 top-five finishes, 91 top-10s, three poles, and has led 899 laps.
● Race Weekend Activations: Race fans attending the Go Bowling at the Glen will have a full menu of Go Bowling activities to engage in at the Go Bowling Fan Experience Tent in the fan midway at the track.

Aric Almirola, Driver of the No. 10 Go Bowling Ford Mustang for Stewart-Haas Racing:

Have you enjoyed the road-course racing at Watkins Glen?

“Watkins Glen is one of my favorite road courses. It’s so flowy and fast and you get in such a rhythm going through the bus stop. It’s unlike anything we do anywhere else. It’s incredible to drive a racecar to its limits and go through that chicane at 120 to 130 miles per hour. I remember before I ever went and made a lap at Watkins Glen, I walked back there to the backstretch and stood and watched Cup practice before I went out in an Xfinity car. And I watched the Cup cars go through there and was like, ‘Whoa! You want me to do that? Like, I don’t know if I can do that.’ But it’s just an awesome place. It’s a really great racetrack. We have a great fan base there up in New York and it’s always a packed house.”

As a family man, what does it mean to you to represent the sport of bowling on and off the racetrack?

“Well, bowling is a lifetime sport enjoyed by all ages. I love to bring my family bowling whenever we can. Whether you’re a casual or avid bowler, you can have fun on the same lane, rain or shine. Just like racing, it’s a family sport. My grandfather got me into racing and I wouldn’t be here if it wasn’t for him introducing me to the sport, and the same goes for bowling. Bowling is a sport that a lot of people learn at a young age as a family and I love that aspect of the sport.”

You have been with Go Bowling since 2013 and have continued to grow the sport through racing. Why has it been so successful?

“It’s a mix of the hard work from everyone at Go Bowling, Strike Ten Entertainment and the race team, and the NASCAR fans being the perfect demographic to market to. NASCAR fans are the most sponsor-loyal fans in the world with American values and, in this case, the sponsorship is a sport that every single one of them can participate in. When you look at all of the creative activations Go Bowling does, like bringing the lanes to the racetrack, setting up appearances to talk to fans about racing and bowling, and the fun opportunities that are provided through sweepstakes, you see a heightened level of excitement at the lanes. Not to mention, the millions of fans at home watching the No. 10 Go Bowling Ford Mustang at the Go Bowling at The Glen. It’s a win for everyone – especially race fans.”

You had a solid run at Richmond last weekend. How does that help your confidence heading to the final two races of the regular season?

“When the clouds came and the track cooled, we kind of lost it. The first couple runs of the race we were so fast. We drove from 32nd up to the top-five. Our car was really good on the long run. We took care of the tires really well and it did everything I needed it to do. As the pace picked up and the track cooled off, I just couldn’t get the car to rotate like I needed it to and just couldn’t quite carry the speed those other cars could. It was a good day. We have had a rough month, so to go there and rebound and have a good run was important. We need a win, but to have a good run is a confidence booster.”