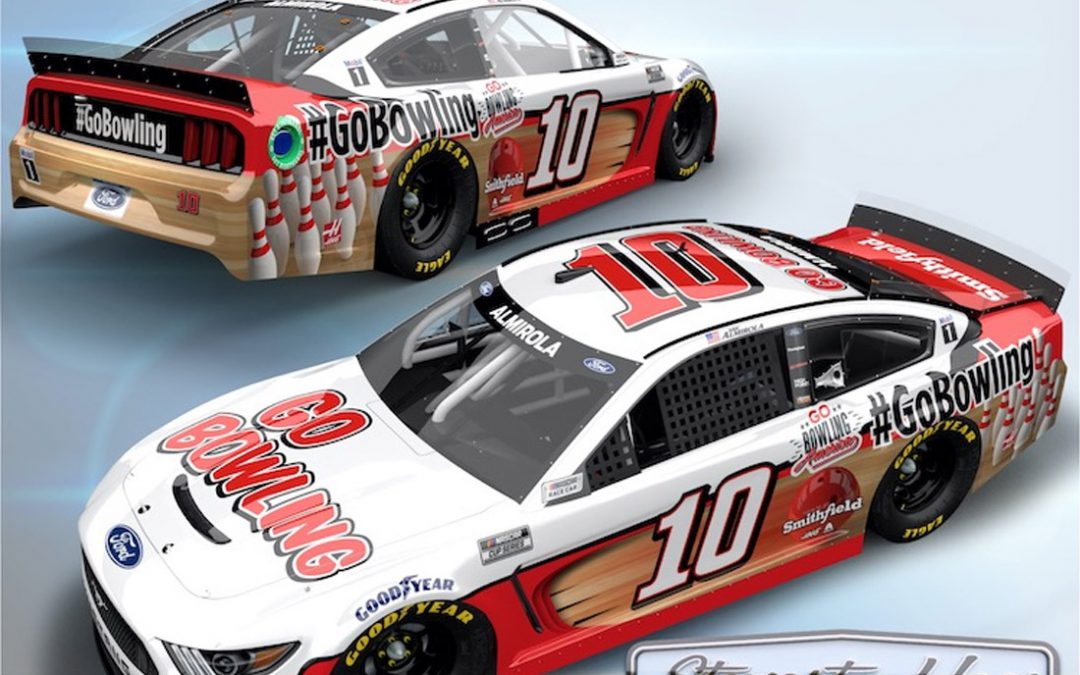 Notes of Interest
● Three weekends ago at New Hampshire Motor Speedway in Loudon, Almirola claimed the victory after leading 46 laps at the 1.058-mile flat oval to earn his third career NASCAR Cup Series win in 374 starts. After a year full of adversity and bad luck, the victory earned the No. 10 team, which was 27th in the standings and facing a must-win situation if it was going to compete for this year’s Cup Series championship, put itself in prime position to earn one of the 16 coveted berths in the 10-race playoffs that begin Labor Day weekend. Almirola’s award-winning YouTube series “Beyond the 10” captured his entire race day here.

● Almirola’s best finish of 12th at Watkins Glen (N.Y.) International came in his most recent start in 2019. Due to COVID-19 protocols, the Cup Series did not visit The Glen in 2020.

● Road-Course History: Aric Almirola has 26 road-course starts in the NASCAR Cup Series. He has two top-10 finishes with a best of eighth at Sonoma (Calif.) Raceway, four top-20s at Watkins Glen (N.Y.) International with a best finish of 12th, three top-20s on the Charlotte (N.C.) Motor Speedway Roval with a best finish of 14th, and a top-12 finish in the Feb. 9 Busch Clash on the Daytona (Fla.) International Speedway road course – his best road-course finish of the year.

● Crew chief Mike Bugarewicz is no stranger to visiting a road-course victory lane. In 2016, Bugarewicz won at Sonoma with Stewart-Haas Racing (SHR) co-owner and NASCAR Hall of Famer Tony Stewart during his final year as a fulltime driver in the NASCAR Cup Series.

● In 2019, Almirola and professional bowler Jason Belmonte created the “World’s Fastest Strike” by throwing a bowling ball out of the No. 10 Go Bowling Ford at 140 mph at Charlotte Motor Speedway. Click here to watch the strike, and dive deeper into the day with the full video here.

● The No. 10 Go Bowling car is already on a “roll.” On August 3, Stewart-Haas Racing Esports driver Graham Bowlin won the Coca-Cola iRacing Series race from Watkins Glen International in the No. 10 Go Bowling Ford Mustang. See the full article here.

● Go Bowling will adorn the No. 10 Ford this weekend at Watkins Glen for the first time this season. Almirola has worked with Go Bowling and the Bowling Proprietors’ Association of America (BPAA) since 2013. Bowling has been a top activity in the Almirola household and is a favorite activity across the NASCAR fan base, striking the perfect partnership.

● The NASCAR Cup Series, which began its 38-race season on Feb. 11 with the non-points paying Duel at Daytona (Fla.) International Speedway and ends Nov. 7 at Phoenix Raceway, is coming off a two-week break in the schedule as broadcast partner NBC and its family of networks has been immersed in coverage of the Summer Olympics in Tokyo. Almirola and his family took the time to head south for a vacation in Key West, Florida, where they spent the week lobster hunting. Coincidentally, Almirola’s prize for winning at New Hampshire was the coveted Lobster Trophy, providing some humor on his social media channels and the NASCAR spoof account @nascarcasm.

● “Go Bowling America” provides bowlers of all age groups the opportunity to bowl in a fun, non-competitive league and receive a new entry-level performance bowling ball for completing the league. National Bowling Day is Aug. 14, and Go Bowling is celebrating by giving everyone in America who registers at GoBowling.com a free bowling game coupon. For details and to find a participating bowling center, visit www.GoBowling.com. At GoBowling.com, consumers can also register to win a bowling experience of a lifetime with Tony Stewart. He’ll be hosting the grand prize winner and a guest at his home for a private, in-person bowling experience they’ll never forget.

● After the season’s first 22 points-paying events, Almirola and the Go Bowling Ford team sit 14th in the playoff standings with 377 points, 497 behind leader Denny Hamlin.

Aric Almirola, Driver of the No. 10 Go Bowling Ford Mustang for Stewart-Haas Racing:

You’ve partnered with Go Bowling since 2013. Why is it such a great fit for you personally, as well as with Stewart-Haas Racing?
“I grew up bowling in Tampa as a kid. Those summers were so hot down there, and you never knew what the weather was going to do, so bowling was something that was always available if we wanted an indoor activity. Fast forward to today, I have a family that loves to bowl and it’s one of our favorite activities to do together. When it comes to this partnership in racing, you couldn’t ask for more fan crossover from one sport to the other. Everyone loves bowling and NASCAR fans and families are bowling fans. Everyone at Go Bowling does such an incredible job with spreading the word and making it fun and inviting at the track for the fans. I’m excited that I get to be a part of spreading the word again driving the No. 10 Go Bowling Ford at the Go Bowling at The Glen.”

You and Jason Belmonte threw a bowling ball out of your car at 140 mph to execute the World’s Fastest Strike. How was that?
“That was one of the most insane events I’ve ever been a part of. So much technology and effort went into making that happen. We had to get a special ball and pins created that didn’t explode upon impact. We missed four times before finally getting the strike on the fifth throw. We didn’t even know we would get it. One of the bowling balls even jumped over the tire barrier Charlotte Motor Speedway built for us. The ball ended up in turn two. We were on the frontstretch. Thank goodness we hit it on the fifth try because we went back to try again to get more camera angles and the engine died on us just three tries later. Good thing Jason Belmonte is the No. 1 bowler in the world. All I had to do was drive straight.”

Are you excited to get to the road course at Watkins Glen after your win and a two-week break?
“I’m really looking forward to getting to Watkins Glen. It’s one of my most confident road courses of all the ones we go to, now. I’m looking forward to going there and being competitive with a little extra incentive coming off the win, and it’s the Go Bowling at The Glen and we’re in the Go Bowling car, so I’m even more excited to go out and give it my all.”

What is it like coming off a win at such a pivotal point in your season?
“It’s such a feeling of relief, joy and excitement all at once. The coolest thing about the win is that we’ve just been through such a tough year, and to be able to keep fighting and grinding with this 10 team that is doing its job to bring the best racecar it can each weekend is all you can ask for. We want to keep this moment going and win some stages and get some playoff points and we really want to win another race to peak at the right time for the playoffs. We have to take advantage of this momentum we have and I’m excited to be heading to a road course with less pressure.”