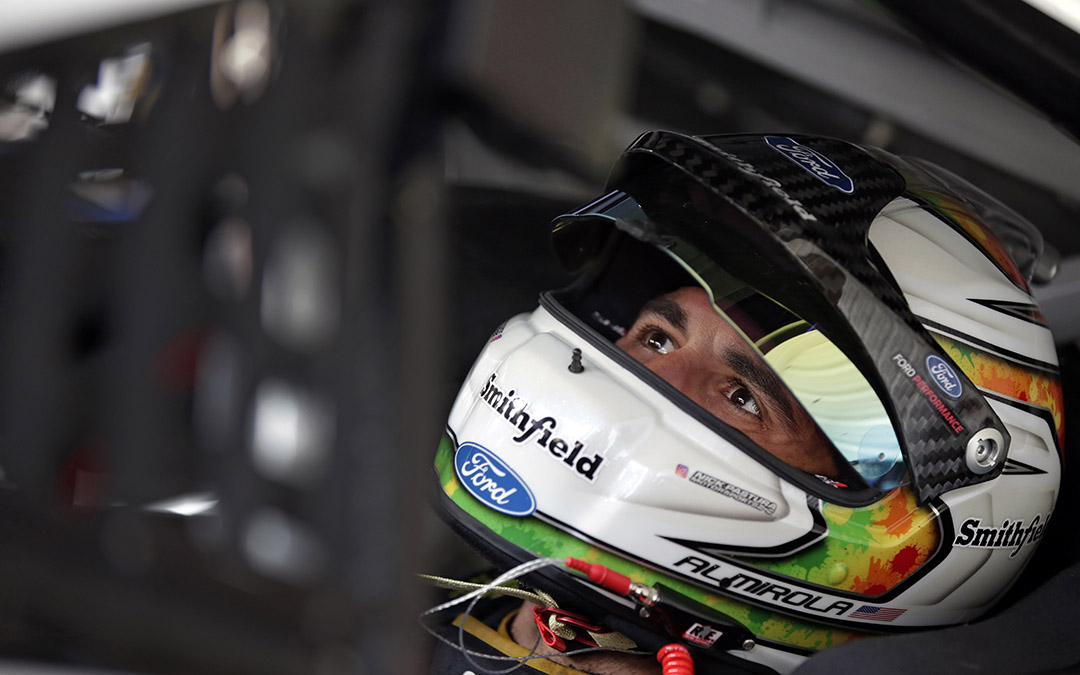 Looking for a Strike at The Glen

The 2.45-mile, seven-turn circuit is located in the Finger Lakes Region of Upstate New York and is quite different from Sonoma (Calif.) Raceway, the season’s first road-course stop each June.

“Watkins Glen is a beast of its own,” Almirola said. “We go to Sonoma, which is also a road course but much more like Martinsville, where it’s very slow, very technical and you struggle for grip. Then you go to Watkins Glen, that’s like a mile-and-a-half racetrack for road courses. It’s very fast and aero-dependent. I can’t stress how fast that racetrack is. It’s totally different than Sonoma.”

Last year at The Glen was a doubleheader weekend for Almirola, who competed in both the Cup Series and Xfinity Series races. He earned his first Watkins Glen Xfinity Series top-five, his previous best Xfinity finish there being eighth in 2011. He finished 22nd in last year’s Cup Series race.

In the days leading into each race weekend, Almirola focuses on improving his physical abilities and is well prepared for races where drivers are faced with high G-forces, like Watkins Glen.

“It takes a different technique,” he said. “From the driver standpoint, it’s very aggressive and taxing on the body. There are a lot of G-forces (at Watkins Glen) compared to Sonoma, and we’re doing some heavy braking in several different spots on the track. Going through the esses, you try and run through there wide open and the car is very sketchy trying to go up through there at 150 to 160 miles per hour. It’s fun and very challenging.”

GoBowling.com will serve as the primary sponsor of the No. 10 Ford this weekend. Go Bowling is the destination for bowling fans and enthusiasts seeking news and information about one of America’s favorite pastimes and the nation’s No. 1 participatory sport. With more than 67 million people taking to the lanes every year, GoBowling.com is a one-stop location where people of all ages can go to satisfy their love of bowling. Consumers turn to GoBowling.com every day to find bowling fun – discovering new bowling centers, tips and tricks to use on the lanes, event news, and great deals at more than 1,700 family friendly bowling centers across the country.

Almirola and the No. 10 Go Bowling Ford Mustang also will give fans a chance to get a little extra money for their bank account this weekend. If he wins at Sunday’s Go Bowling at The Glen, one lucky fan will win $10,000. If Almirola doesn’t win Sunday, one fan still has the chance to win $1,000. To enter the contest, visit GoBowling.com/10k.

Also, fans can now get VIP, behind-the-scenes access in following “Aric ‘Beyond the 10’” by subscribing to his YouTube channel and following episodes on Facebook and Instagram TV. Episodes showcase never-before-seen footage of Almirola at the racetrack, on family trips, and “A Day in the Life” during the week, as well as all that goes into a NASCAR Cup Series driver’s season. Click here to subscribe on YouTube and watch the latest episode.

Almirola sits ninth in the championship standings heading to Sunday’s GoBowling at The Glen, 210 points out of first.

How do you feel going into the road-course race? With the Charlotte ROVAL coming in the playoffs, is it more important to you?
“Road-course racing has been arguably my Achilles heel throughout my career, and I don’t claim to be very good at road-course racing at all. I have always worked really hard at it to try and be better. As a racecar driver, you want to be versatile. You want to be able to contend for wins on superspeedways and intermediate tracks and short tracks – challenging tracks and road-course tracks. You don’t want to be weak in any one area. For me, it has been a big challenge to conquer road-course racing. I have put a lot of effort into this year to be a better road-course racer and had a lot of help with it. With Ford, they have helped me a lot with a lot of time in the simulator with our race team at Stewart-Haas Racing, and they’ve provided a lot of data to look at and a lot of things to study. I got my second top-10 on a road course out at Sonoma and had a really good run and was really fast. Same thing going into Watkins Glen. I have worked really hard studying data and getting ready in the Ford simulator. We are fortunate enough to have Go Bowling on the car for the weekend because it is the Go Bowling weekend at The Glen. I feel that will help me get in a rhythm for Sunday and hopefully that will pay off for Sunday at Watkins Glen. Road-course racing is definitely not something that I am overly comfortable with, or something I claim to be good at by any means, but through hard work I am trying to get a lot better at it and I feel like I have.”