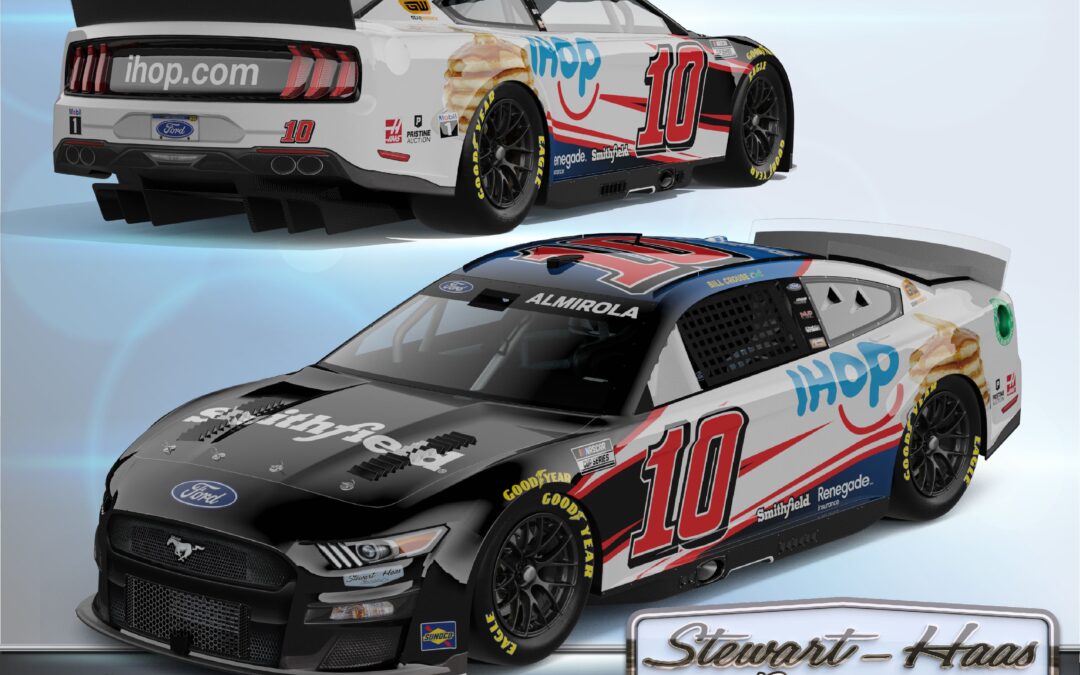 Notes of Interest
● History at Texas: In 21 NASCAR Cup Series starts on the 1.5-mile oval at Texas Motor Speedway in Fort Worth, Almirola has one top-five, five top-10s, and has led 101 laps. His previous start was the NASCAR All-Star Race in May, when he started eighth and finished 12th.

● Last weekend at Bristol (Tenn.) Motor Speedway, Almirola earned his fourth Cup Series pole award and led the opening 36 laps. But misfortune struck by way of a steering failure that took the 38-year-old out of the race with 82 laps to go.

● 2022 Season: Through 29 races this season, in addition to last week’s pole position, Almirola has earned two top-five finishes, seven top-10s, and has led 45 laps. His average finish of 17.7 and seven top-10s have bettered his totals for the entire 36-race 2021 season.

● Driver Points: Almirola arrives at Texas 20th in the driver standings with 627 points.

● IHOP will adorn the No. 10 Smithfield Ford this weekend with a specialty paint scheme for the second time this year. Smithfield Foodsis an American food company with agricultural roots and a global reach. Its 63,000 team members are dedicated to producing “Good food. Responsibly.®” Smithfield is one of the world’s leading vertically integrated protein companies. The company has pioneered sustainability standards for more than two decades, including its industry-leading commitments to become carbon negative in U.S. company-owned operations and reduce GHG emissions 30 percent across its entire U.S. value chain by 2030. Smithfield believes in the power of protein to end food insecurity and has donated hundreds of millions of food servings to local communities. Smithfield boasts a portfolio of high-quality iconic brands, such as Smithfield®, Eckrich® and Nathan’s Famous®, among many others. For more information, visit www.SmithfieldFoods.com, and connect on Facebook, Twitter, LinkedIn and Instagram.

Aric Almirola, Driver of the No. 10 Smithfield/IHOP Ford Mustang for Stewart-Haas Racing:

Are the last seven races a building opportunity for 2023?
“Yes. We’re working really hard on 2023. In the last six races before the playoffs, we were really trying to massage on things and take racecars that we felt were capable of running seventh to 12th and hoping that we would hit on that missing ingredient to get where we needed to be. Since we’re out of the playoffs, we’ve really used this opportunity to swing for the fences on stuff that is way outside of the box and it’s also a big learning curve for our organization. We have a lot of great engineers here that have a lot of bright ideas and, oftentimes throughout the middle part of the season, we would shoot them down because we’re like, ‘Man, we can’t try that. We only have 15 minutes of practice and what if it doesn’t work? If it doesn’t work, we can’t get it back out of the car.’ So we weren’t really willing to take that risk and, especially in the early summer months, we were right on the cutoff line for the playoffs on points, so we were just trying to be consistent and we couldn’t really take that risk. Now with not being in the playoffs, we all kind of held hands and don’t really care about finishing 17th, 18th or 19th in points. It doesn’t really matter to us as much as it does to learn all we can going into next year so we can go race for a championship next year. Drew (Blickensderfer, crew chief) and I had that conversation with our team after we missed the playoffs at Daytona. We came back to the shop and we talked and we said, ‘Hey, I remember a handful of years ago the No. 22 car missed the playoffs and came back the next year and won the championship.’ We’re not going to get too upset and hang our heads. We’re just going to look ahead and focus on getting better for next year.”

What are your thoughts heading to Texas this weekend after finding speed at Kansas and Bristol?
“I’m really excited to see what we bring this weekend. We’ve tried some new setups and they’ve worked. At Kansas. I was able to pass a lot of cars from the back and it felt like we had really improved. Getting the pole at Bristol this past weekend gave this 10 team a lot of confidence after a tough year. Texas is a place where we have found a lot of speed, even outside of the playoffs. In 2019, we had a shot at the win in the closing laps. We’ll see what we have, but I feel good about it.”

What do you think of the competitiveness between non-playoff and playoff drivers?
“It’s incredible to see this much competition. It keeps us motivated knowing that the best car and best driver can win on any given weekend. It’s healthy for the sport and makes it that much more difficult for the guys in the playoffs to race for a championship. The remaining races in the season suit us well, so we’re counting on having a shot at a win every weekend.”