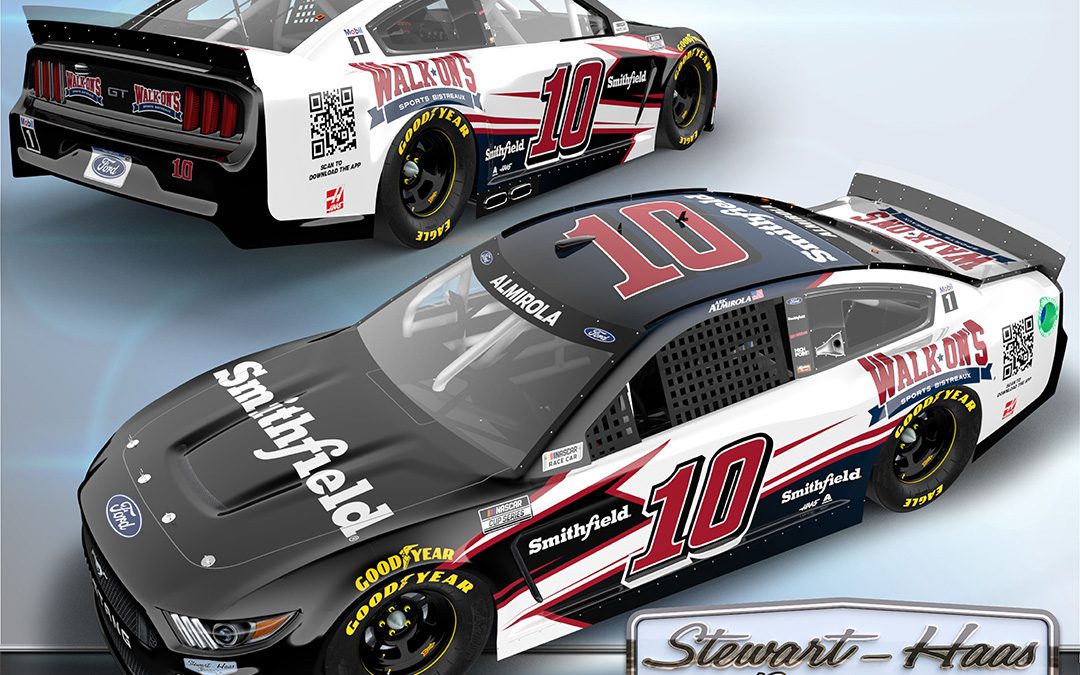 Notes of Interest
● In 20 NASCAR Cup Series starts, Aric Almirola has five top-10 finishes, one top-five, one pole, and has led 101 laps at the 1.5-mile Texas Motor Speedway oval in Fort Worth. Almirola finished runner-up there Nov. 3, 2019, behind teammate Kevin Harvick, who was vying for a championship. Earlier this year, Texas hosted the NASCAR All-Star Race, where Almirola pointed his way in by winning the All-Star Open. He finished eighth.

● Walk-On’s Sports Bistreaux will join Smithfield on the No. 10 Ford for Stewart-Haas Racing (SHR) this weekend for the first time. Founded in 2003 and co-owned by NFL legend Drew Brees since 2012, Walk-On’s provides the sensations of game day with a taste of Louisiana. Every dish is started from scratch and uses fresh ingredients to bring mouthwatering, Cajun cuisine to life. And whether it’s for dinner with the family, date night, cocktails with the girls or to watch a game on the big screen, Walk-On’s is always happy to share its Louisiana culture. In addition to this weekend’s fresh, new paint scheme, the No. 10 Ford will have a QR code on the rear quarter panels directing fans to download the Walk-On’s app. To learn more about Walk-On’s story, click here. Walk-On’s will also be fueling Almirola and the No. 10 team with a variety of lunch menu items prior to Sunday’s race.

● Walk-On’s is the perfect fit for Almirola. He climbed through the ranks when he found an ad in the newspaper for a diversity combine hosted by Reggie White and Joes Gibbs. Almirola pursued his dream while in college at the University of Central Florida and won the combine that kicked off his career. He explains his walk-on story on SHR’s social media channels. It also can be viewed here.

● Smithfield celebrates 10 years of partnership with Almirola this season with a special campaign called Taste Victory.As one of the most active partners in NASCAR, Smithfield engages fans all year long by hosting a microsite that provides the opportunity to win when Almirola wins or finishes inside the top-10. When Almirola wins, one fan wins $10,000, and 10 fans win a gift card for each top-10 finish. The microsite also doubles as an Aric Almirola fan page and entertainment source where fans can get behind the wheel of the No. 10 Smithfield Ford with a custom racing game, and learn more about Almirola with fast facts, favorite recipes and custom content about his life on and off the track. Visit www.tastevictory.com to learn more. Thanks to Almirola’s Feb. 11 win in his Duel qualifying race for the Daytona 500 and his July 18 win at New Hampshire, two lucky fans have already won $10,000 each.

● Point standings: Almirola is currently 15th in the driver standings with 2,117 points.

Aric Almirola, Driver of the No. 10 Smithfield/Walk-On’s Ford Mustang for Stewart-Haas Racing

Tell us about your “Walk-On’s” story.
“In all sports, you’re either highly recruited or you’re super hungry. I grew up racing as a hobby with my family, but I had huge hopes and dreams to make a career out of it. There was a great opportunity to drive a Late Model when Joe Gibbs and Reggie White started a diversity program. There were 10 to 20 resumes accepted to come do a tryout and I won it and earned my spot. That opportunity for me to go from racing my family’s racecar and not getting paid and spending my own money that I earned working, to transitioning to getting this opportunity to go drive professionally for a real race team, it was incredible. That was the launch. I was willing to take any opportunity I could get and I was willing to grind as hard as I could to make it work and to make it to the professional level. It was exhausting but so rewarding to have made it on my own. The rest is history. That’s my walk-on story.”

You ran well at the All-Star Race this year at Texas. Should we expect similar results this weekend?
“Texas this year was one of the first races that we brought really good speed and had an overall good day. We won the All-Star Open and advanced to the All-Star Race and still had a good run at it. Texas has always been good to us. We found something earlier this year there and our team has continued to work hard and make improvements. We led some laps in 2019 when we weren’t in the playoffs at Texas and just came up short behind Kevin (Harvick), so we know this team can find the speed to compete even in the midst of being outside of the playoffs.”