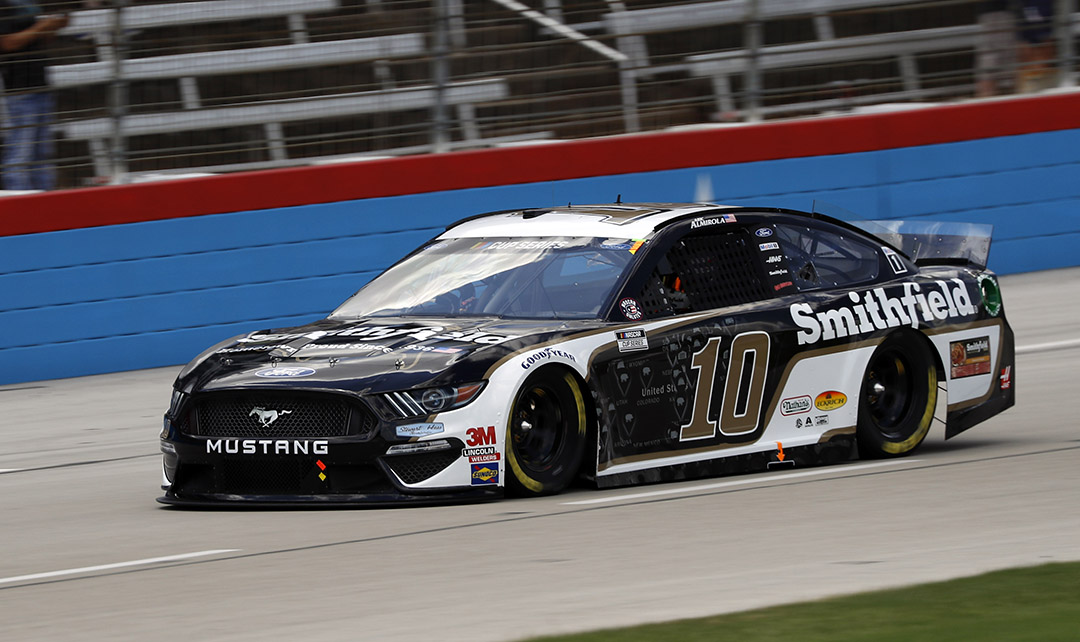 Stage 1 Recap (Laps 1-105):
● Aric Almirola started first and finished 16th.
● The No. 10 Smithfield Ford driver radioed brake issues on the pace laps.
● He held the lead until the competition caution on lap 20, where he opted not to pit.
● Almirola lost the lead to teammate Kevin Harvick on the restart and regained the lead on lap 56.
● He pitted under caution on lap 63 for four tires, fuel and adjustments. He was handed a blend-line violation and had to take a pass-through penalty to put him two laps down.
● He raced back to the lead lap and gained multiple positions before pitting at the end of the stage.

Final Stage Recap (Laps 211-334):
● Almirola started 10th and finished 10th.
● Almirola was involved in an accident on lap 219 with minimal damage. He was scored fifth.
● The No. 10 Ford driver raced to third before a caution on lap 243.
● Almirola pit from third place on lap 288 for four tires and fuel.
● An ill-timed caution was thrown on lap 305 while Almirola was a lap down due to green-flag pit stop cycles.
● After multiple cautions, Almirola restarted 10th and held his position to earn his seventh-straight top-10.

Aric Almirola, driver of the No. 10 Smithfield Ford Mustang for Stewart-Haas Racing:
“Man. One of these days we’ll get everything to go our way. That was my fault on the penalty, but we had such a fast car and got it back in position to compete for a win again before that caution came out. We’re still bringing fast Smithfield Ford Mustangs every weekend and we learned a lot for when we come back here and compete for a championship.”

Notes:
● Almirola earned his 10th top-10 of the season and his fifth top-10 in 19 career NASCAR Cup Series starts at Texas.
● This was Almirola’s seventh straight top-10, and it is the longest top-10 streak of his career. He finished fifth June 14 at Homestead-Miami Speedway, third June 22 at Talladega (Ala.) Superspeedway, third June 27 at Pocono (Pa.) Raceway, fifth June 28 at Pocono, third in the Brickyard 400 July 5 at Indianapolis Motor Speedway, and eighth last Sunday at Kentucky Speedway in Sparta. His previous best streak was a run of six consecutive top-10s in 2019 that began with the second race at Atlanta Motor Speedway and lasted through the series’ seventh race at Texas.
● This was Almirola’s fourth straight top-10 at Texas. He finished second in the series’ previous visit to the track last November.
● Since joining SHR in 2018, Almirola has only finished outside the top-10 once at Texas.
● Almirola led three times for 35 laps to increase his laps-led total at Texas to 100.
● Austin Dillon won the O’Reilly Auto Parts 500 to score his third career NASCAR Cup Series victory, his first of the season and his first at Texas. His margin of victory over second-place Tyler Reddick was .149 of a second.
● There were 10 caution periods for a total of 45 laps.
● Only 18 of the 40 drivers in the race finished on the lead lap.
● Harvick remains the championship leader after Texas with a 91-point advantage over second-place Ryan Blaney.

The next event on the NASCAR Cup Series schedule is the Super Start Batteries 400 on Thursday, July 23 at Kansas Speedway in Kansas City. The race starts at 7:30 p.m. EDT with live coverage provided by NBCSN and SiriusXM NASCAR Radio.