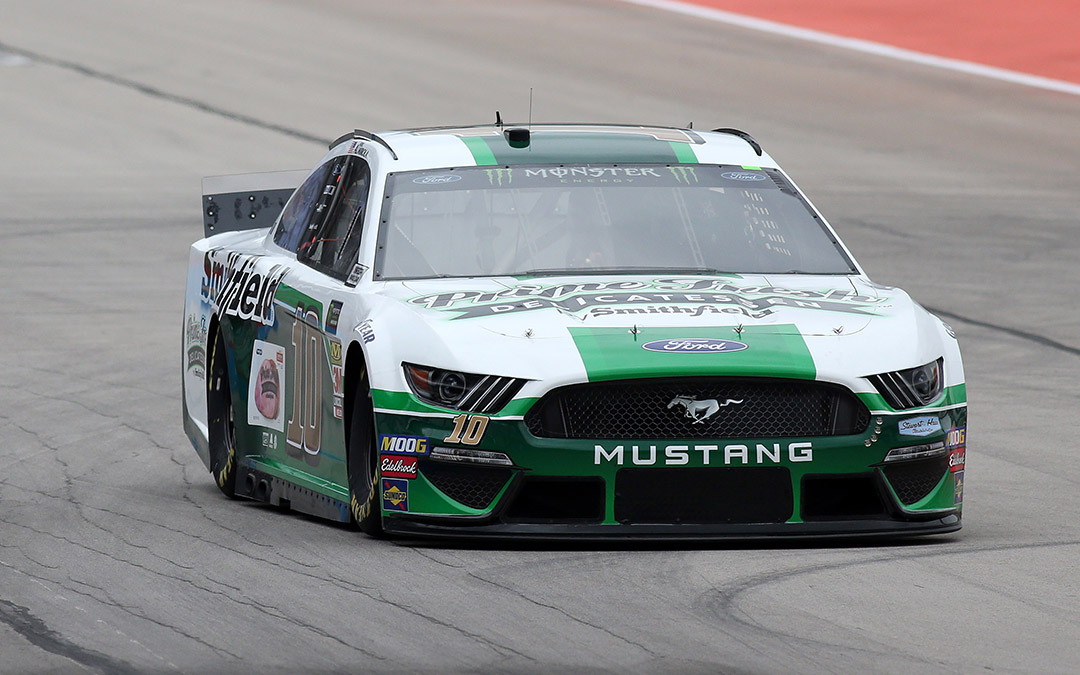 Stage 1 Recap (Laps 1-85):
● Aric Almirola started 21st and finished 18th.
● Almirola pitted the No. 10 Smithfield Prime Fresh Ford under caution on lap 14 for fuel only. He was scored 18th off pit road.
● He drove to sixth by lap 78 before pitting for four tires, fuel and air pressure and chassis adjustments.
● Almirola opted not to pit at the conclusion of the stage.

Stage 2 Recap (Laps 86-170):
● Started fifth and finished 12th.
● The No. 10 Ford battled in and around the top-10 during the opening laps.
● Almirola drove as high as ninth and stayed inside the top-10 before pitting on lap 142 for four tires, fuel and adjustments.
● The caution was called on lap 148. Running in 12th place, Almirola took the wave-around to advance to the lead lap.
● He raced just outside the top-10 before the end Stage 2.

Stage 3 Recap (Laps 171-334):
● Started 14th and finished seventh.
● Almirola rallied back to the top-10 in just a few laps when the checkered flag waved to start Stage 3.
● He raced to sixth by lap 215 but noted that if he couldn’t draft or get a push from behind it would be difficult to catch up to any other cars.
● Crew chief Johnny Klausmeier called Almirola to the pits from second place on lap 236 for four tires, fuel and air pressure adjustments. He was scored fourth after green-flag pit stops cycled through.
● After a lap-254 caution, the No. 10 Ford team opted not to pit and advanced to first place.
● He raced inside the top-four and pitted from third place on lap 301 for two right-side tires and fuel.
● After green-flag pit stops cycled through, Almirola raced his way up to seventh to earn his sixth top-10 of the season.

Notes:
● Almirola earned his sixth top-10 of the season and his third top-10 in 17 career Monster Energy NASCAR Cup Series starts at Texas.
● This was Almirola’s second straight top-10 at Texas.
● Almirola has finished among the top-10 in every race this year with the exception of the season-opening Daytona 500.
● Almirola’s six straight top-10s marks a career high. His previous best top-10 streak was four in April-May 2013.
● Almirola’s seventh-place result equaled his previous best finish at Texas – seventh in April 2013.
● Almirola led once for three laps – his first laps led at Texas.
● Denny Hamlin won the O’Reilly Auto Parts 500 to score his 33rd career Monster Energy NASCAR Cup Series victory, his second of the season and his third at Texas. His margin of victory over second-place Clint Bowyer was 2.743 seconds.
● There were five caution periods for a total of 29 laps.
● Only 15 of the 39 drivers in the O’Reilly Auto Parts 500 finished on the lead lap.
● Kyle Busch leaves Texas as the championship leader with an eight-point advantage over second-place Hamlin.

Aric Almirola, driver of the No. 10 Smithfield Prime Fresh Ford Mustang for Stewart-Haas Racing:
“I didn’t sleep at all last night with a stomach bug, so I’m really, really depleted. I haven’t been able to keep anything down, so I’m just really hungry and I’m really tired. We don’t get to call in sick. That’s the challenging part of our job occasionally. The flu or a cold or a stomach bug pops up, and you’ve got to fight through it. I’m really proud of everybody on our Smithfield Prime Fresh Ford Mustang. We had a good car and we still got out of here with a top-10, so that’s sixth in a row. I’m proud of that.”

Next Up:
The next event on the Monster Energy NASCAR Cup Series schedule is the Food City 500 on Sunday, April 7 at Bristol (Tenn.) Motor Speedway. The race starts at 2 p.m. EDT with live coverage provided by FS1.