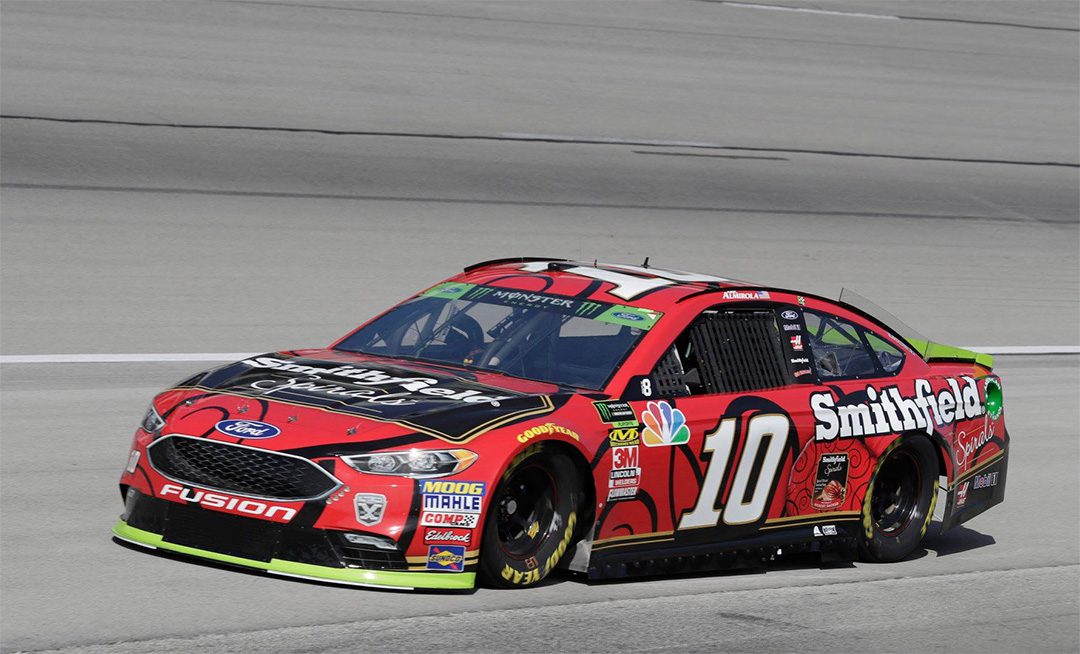 Stage 1 Recap (Laps 1-85):
● Aric Almirola was sent to the rear of the 40-car field for an unapproved body modification after inspection.
● The Round of 8 contender was able to work his way up to 10th to finish the stage.
● He raced his way into the top-20 by lap 26 and was inside of the top-10 by lap 53.
● The No. 10 Smithfield Ford Spirals team executed an excellent stop at the end of the stage, earning two spots on pit road prior to Stage 2.

Stage 2 Recap (Laps 86-170):
● Almirola started Stage 2 in eighth and ended it in sixth.
● The Tampa native started Stage 2 strong but began to battle a “tight and chattering” condition shortly into the run.
● The Smithfield Spirals team pitted for a scheduled green-flag stop on lap 134 for four tires, fuel and adjustments. As the field cycled through stops, Almirola was running in the sixth spot.
● After Stage 2 Almirola pitted for four tires, fuel and adjustments to help with lateral grip.

Final Stage Recap (Laps 171-337):
● Almirola started the final stage ninth and ended it in the eighth position.
● With less than 100 laps to go, Almirola raced his way inside of the top-five.
● The Smithfield Spirals Ford team was the first out of all the playoff contenders inside the top-10 to make a scheduled, green-flag stop on the lap-278 cycle. The crew serviced the No. 10 with four tires, fuel and light handling adjustments to assist the balance.
● With just over 30 laps remaining, Almirola was shuffled back a few spots after restarting third and ultimately finished eighth.

Aric Almirola, Driver of the No. 10 Smithfield Spirals Ford Fusion for Stewart-Haas Racing:

“We were a third-place car, and that restart there where we finally were in position we fought all day from the back and started at the tail and worked diligently all day to get up to the front and finally got ourselves in position to at least have a shot and race with those guys. The 22 just went down in turn three and put it right on my door and about wrecked us both. I am not sure. I will have to talk to him. He just continues to make things harder on himself. If that is the way he wants to race me when he is already locked into Homestead and we are out here fighting for our lives, that is fine. When Homestead comes around, if I am not in, he will know it.”

Next Up:
The next event on the Monster Energy NASCAR Cup Series schedule is the Can-Am 500k on Sunday, Nov. 11 at ISM Raceway near Phoenix. It is the penultimate race of the 10-race playoffs and the cutoff race to make the Championship 4. It starts at 2:30 p.m. EST with live coverage on NBC beginning at 1:30 p.m.