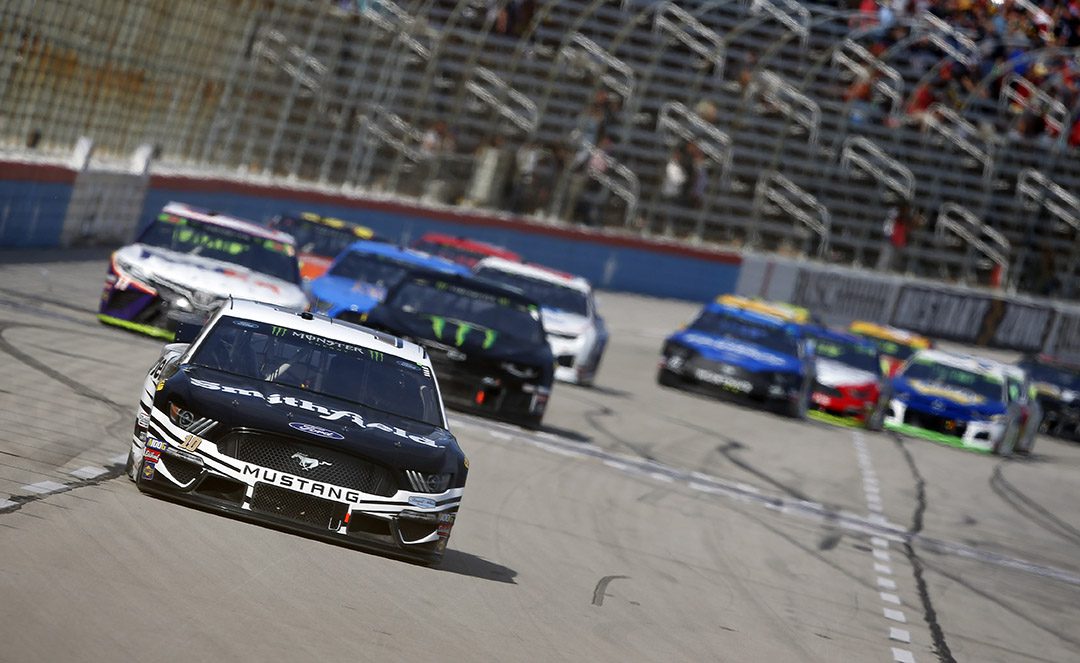 Stage 1 Recap (Laps 1-85):
● Aric Almirola started sixth and finished 13th.
● The Smithfield Ford driver raced to third on the restart. He said his car was slightly tight but the overall balance was good.
● Almirola advanced to second place behind teammate and leader Kevin Harvick while holding off teammate Daniel Suárez.
● On lap 35, he pitted under caution for fuel only.
● After a lap-59 caution, Almirola raced from 10th to sixth before another caution was called on lap 72.
● He pitted for four tires, fuel and adjustments to restart 29th under the caution period.
● Lap 81 brought another caution, but the No. 10 Ford did not pit.
● Almirola drove to 13th during the one-lap shootout and stayed out at the conclusion of the stage.

Stage 2 Recap (Laps 86-170):
● Almirola started fourth and finished first to earn 10 bonus points.
● Almirola drove the No. 10 Smithfield Ford to second place on lap 104.
● He reported tight-handling conditions in the exit of the turns on lap 116.
● Almirola gained the lead over the No. 48 car on lap 139.
● He pitted from the lead on lap 145 for fuel and chassis adjustments. When green-flag pit stops cycled through on lap 165, he regained the lead.
● At the conclusion of the stage, Almirola pitted for four fresh tires, fuel and air pressure adjustments.

● Almirola started seventh and finished second.
● The No. 10 was scored in fourth before a lap-185 caution.
● The Smithfield Ford driver advanced to second place on the restart and gained the lead for the third time on lap 201.
● Almirola pitted on lap 241 for four tires, fuel and adjustments. While he was on pit road the caution was called. Luckily, he passed the start/finish line before the caution waved and remained the leader when racing resumed.
● Teammate Harvick passed Almirola for the lead on lap 256.
● Almirola pitted from second place on lap 305 for fuel only.
● When he rejoined the track, Almirola was scored 4.5 seconds behind leader Harvick.
● With just five laps to go, Almirola drove the No. 10 Smithfield Ford to within 1.4 seconds of Harvick before the checkered flag waved.

Notes:
● Almirola earned his third top-five and 12th top-10 of the season and his first top-five and fourth top-10 in 18 career Monster Energy NASCAR Cup Series starts at Texas.
● This is Almirola’s third consecutive top-10 at Texas. He finished seventh in the series’ previous visit to the track in March.
● Almirola’s runner-up result bettered his previous best finish at Texas – seventh, earned twice (April 2013 and March 2019).
● Almirola led four times for 62 laps to increase his laps-led total at Texas to 65.
● Harvick won the AAA Texas 500 for the third consecutive year. His margin of victory over second-place Almirola was 1.594 seconds.
● There were 11 caution periods for a total of 56 laps.
● Only 14 of the 40 drivers in the AAA Texas 500 finished on the lead lap.
● Ford took the top-four finishing positions and five in the top-10 in the AAA Texas 500.

“Our Smithfield Ford Mustang was really fast. I am really proud of the effort by everybody at Stewart-Haas Racing, Roush Yates Engines and Ford Motor Co. Our cars were really, really good from the time we unloaded here, and we all came with a little something different. We were just trying to learn and get ahead for next year. I think we learned a lot. I am really proud of all the guys on my team. We have had such a bad run of luck the last two months, and it is so nice to come here and just execute all night and have a fast car, lead laps and win a stage and run up front. We had a great night on pit road. I did my part on restarts, and the team did theirs to make an all-around solid night. We can build on that.”

The next event on the Monster Energy NASCAR Cup Series schedule is the Bluegreen Vacations 500k on Sunday, Nov. 10 at ISM Raceway near Phoenix. It is the penultimate race of the 10-race playoffs and the final race in the Round of 8. The event starts at 2:30 p.m. EST with live coverage provided by NBC and SiriusXM NASCAR Radio.