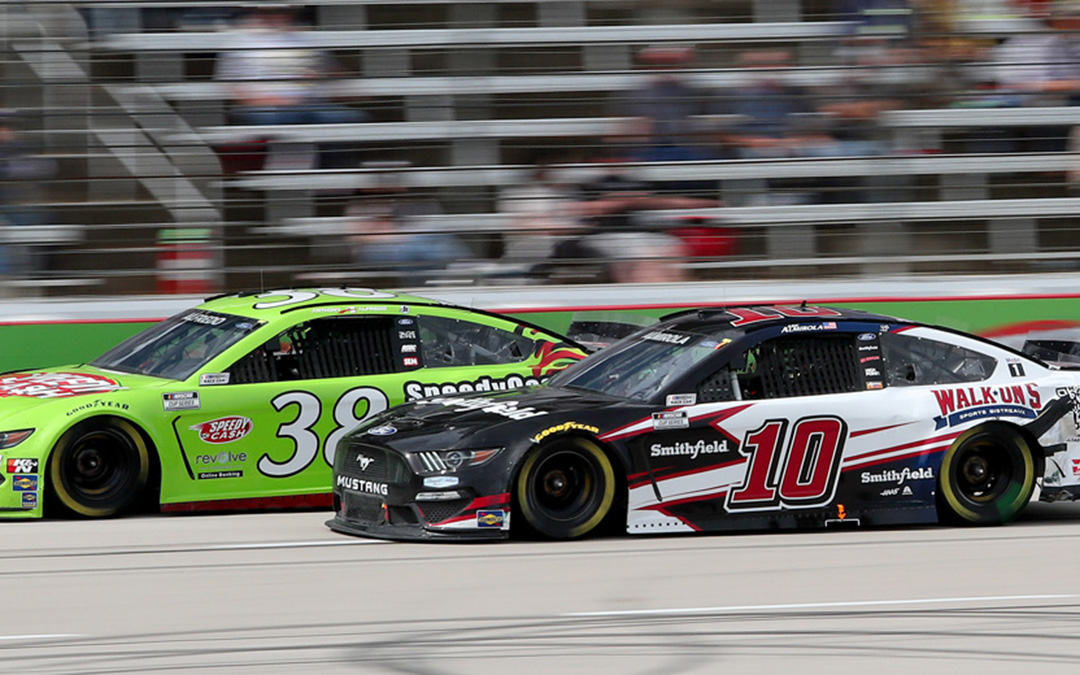 Stage 1 Recap (Laps 1-105):
● Aric Almirola started 22nd and finished 12th.
● Almirola raced to 20th before the competition caution was thrown on lap 25.
● He had damage on his right-rear quarter panel and pitted for four tires, fuel, adjustments and repairs.
● Almirola was involved in a multicar accident on lap 31, sustaining significant damage to his left-rear quarterpanel and nose.
● The No. 10 Smithfield/Walk-On’s team pitted four times to repair damage and restarted at the rear.
● Due to pit strategy, Almirola ran out of fuel on lap 102. He flipped his fuel switch, coasted to pit road after the checkered flag waved and took four fresh tires and fuel.
● Almirola was scored a lap down at the end of the stage and pitted again for additional adjustments.

Stage 2 Recap (Laps 106-210):
● Almirola started 22nd and finished 18th.
● The No. 10 Smithfield/Walk-On’s Ford driver raced to 18th before a caution on lap 165.
● Almirola pitted during the caution for four tires, fuel and chassis adjustments.
● On lap 203, Almirola radioed extremely tight-handling conditions.
● Almirola was forced to the pits at the end of the stage due to a small fire on the floorboard.
● The No. 10 team quickly put out the fire and pitted once more for four fresh tires.

Final Stage Recap (Laps 211-334):
● Almirola started 21st and finished 18th.
● The No. 10 driver continued to radio handling issues due to the damage.
● Almirola pitted for four tires and fuel from 21st during a caution on lap 277.
● He pitted again during a lap-299 caution for four tires, fuel and chassis adjustments.
● Almirola remained three laps down for the remainder of the race, but he gained three positions due to multiple accidents ahead of him.

Notes:
● Kyle Larson won the Autotrader EchoPark Automotive 500 to score his 14th career NASCAR Cup Series victory, his eighth of the season and his first at Texas. His margin over second-place William Byron was .459 of a second.
● There were 11 caution periods for a total of 55 laps.
● Only 15 of the 39 drivers in the Autotrader EchoPark Automotive 500 finished on the lead lap.

Aric Almirola, driver of the No. 10 Smithfield/Walk-On’s Ford Mustang for Stewart-Haas Racing:
“We just couldn’t recover from the damage we got early in the race. Our No. 10 Smithfield/Walk-On’s Ford was just too tight, and I couldn’t get it to turn with the damage. Man, that was a long day. The guys on pit road worked hard to keep us going. We’ve run so well at Texas in the past, so it’s a bummer we didn’t get to truly see what speed we brought. But it is what it is, and we’ll move on to Kansas.”

Next Up:
The next event on the NASCAR Cup Series schedule is the Hollywood Casino 400 on Sunday, Oct. 24, at Kansas Speedway in Kansas City. It is the eighth race of the 10-race playoffs and the second race in the Round of 8. It starts at 3 p.m. EDT with live coverage provided by NBCSN and SiriusXM NASCAR Radio.