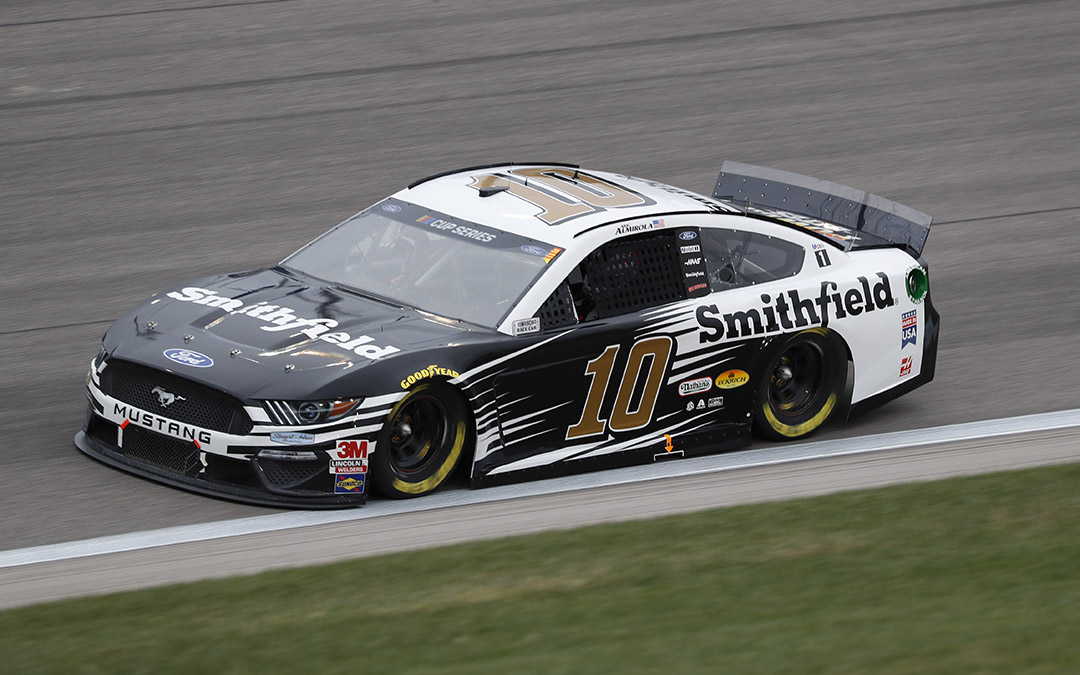 KANNAPOLIS, North Carolina (Oct. 19, 2020) – Aric Almirola, driver of the No. 10 Smithfield Ford Mustang for Stewart-Haas Racing (SHR), is looking forward to Sunday’s NASCAR Cup Series race at Texas Motor Speedway in Fort Worth. It’s a track he’s had circled on the 36-race schedule all year due to his recent success at the 1.5-mile track.

Almirola has earned three consecutive top-10 finishes at Texas and has led laps in each of those appearances. The 36-year-old has only finished outside of the top-10 once at Texas since joining SHR. Last November, Almirola led 62 laps and battled teammate Kevin Harvick for the win before earning a runner-up finish. It was his best finish at Texas and brought his average finish in the last three races there to 6.3.

“Texas is a track I had circled on the list this year,” Almirola said. “It’s a track that I have really become comfortable with over the years. Last year, we had an incredible run and came up just short of a win and we weren’t in the playoffs at that point. We’re in the same position this year and we’ve had a much better year. I’m really excited to see if we can keep it up front this weekend.”

Almirola sits 13th in the playoff standings with 2,167 points. He is currently the second-highest-ranked SHR driver.

The No. 10 Ford driver’s six top-five finishes this year surpass his previous best of four in a season in 2018. In addition, his 297 laps led is a career high for a season, and his 17 top-10 finishes has tied his season best.

“It’s been a great year for us,” he said. “We wish circumstances could have been different at Talladega, where we had a shot to win or earn some good stage points and get us into the next round, but overall for the first year with a new crew chief and team, we have exceeded expectations. We’ve got three more races to earn a win at and cap off the season the right way.”

Almirola can finish as high as fifth place in the final standings, which he did in 2018. He’ll race for his fourth consecutive Texas top-10 this weekend.

What is the most difficult thing to get right or figure out at Texas Motor Speedway?

“I think the most difficult thing at Texas is that it’s repaved and they changed the banking in turns one and two, and it’s just the speed you carry through the banked corner of turns three and four, and then you have to get slowed down for the flat turns one and two. That has made it very challenging. Then, the exit of turn two is very flat, so you’re carrying some speed there and the car just doesn’t have a lot of grip because there isn’t any banking.”

If you’re in the same position this year racing your teammate Kevin Harvick for the win, who is in the playoffs and racing for a spot in the Championship 4, would you race him any differently?

“Kevin and I raced each other clean last year and I would do the same this year. He’s my teammate racing for a championship. If I have the faster car, I’m going to do everything I can to win for my team, Smithfield and SHR, but he had the faster car on the long run and eventually passed me last time to win his way into the championship race. You want to do whatever it takes to win for your team as long as you don’t jeopardize a championship opportunity for your organization.”