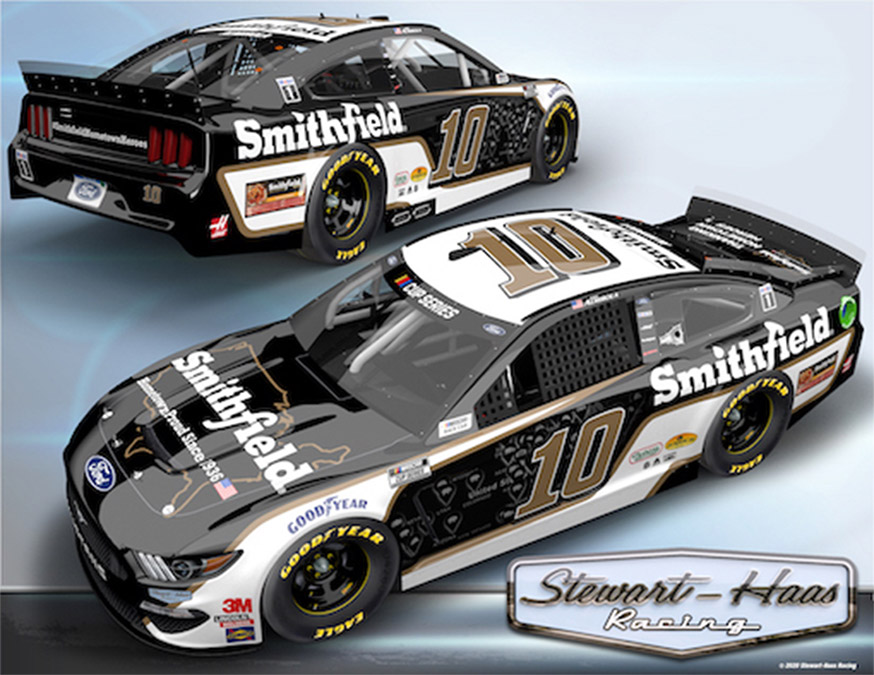 KANNAPOLIS, North Carolina (July 17, 2020) – Aric Almirola, driver of the No. 10 Smithfield Hometown Original Heroes Ford Mustang for Stewart-Haas Racing (SHR), heads to Texas Motor Speedway in Fort Worth with gratitude for both his recent success on the track but, more importantly, the hometown frontline heroes who have worked tirelessly to help others.

“The front-line heroes who help us put food on the table, keep us healthy, and selflessly help others in need are the reasons we’re able to make it through the COVID-19 pandemic,” Almirola said. “To show our gratitude, we’ve decided to run a new paint scheme and program honoring these frontline heroes with the help of our fans and industry.”

Each day, we are introduced to new sets of heroes who are helping the nation get through the COVID-19 pandemic. With operations throughout the United States, Smithfield is proud to share hometowns with many of these heroes and to keep them fed with various Smithfield products, including an Almirola household favorite, “Hometown Original” bacon.

Along with SHR and Almirola, Smithfield looks to honor those who are putting their own health and safety at risk in a selfless act to protect and nourish others around them. The Smithfield “Hometown Original Heroes” program provides the opportunity for fans to share the stories of their own “Hometown Hero.” Be it a nurse, doctor, food worker, public servant or anyone who is on the frontlines each and every day, Smithfield and Almirola want to hear their stories and give them an opportunity to be rewarded for their service.

With a positive outlook on his championship contention this year, Almirola is motivated to bring his team and the hometown heroes more solid finishes, starting Sunday at Texas, where last November he led 62 laps and finished runner-up to teammate Kevin Harvick.

“Texas is a track I had circled on the list this year,” Almirola said. “It’s a track that I have really become comfortable with over the years. Last year, we had an incredible run and came up just short of a win. We’ve been good at tracks this year that haven’t been my best in the past. Now we’re headed to some venues that, statistically, I’m better at. With the momentum and points cushion we have right now, all we have to do is run a clean race and hope to be there in the end.”

The No. 10 Ford driver sits eighth in the playoff standings for his career-best points position after 17 races. In his first two seasons at SHR in 2018 and 2019, Almirola was 11th in the standings after 17 races. Almirola’s next-best streak of races was a run of six consecutive top-10s in 2019 that began with the second race at Atlanta Motor Speedway and lasted through the series’ seventh race at Texas.

While Almirola is the highest average finishing driver in the last six races at 4.5, he’ll try to cap it off with a win Sunday to secure his position in the playoffs.

What do you think about your new paint scheme?
“It looks fast. I love it. The fact that we’re honoring frontline heroes every weekend is awesome. I’m grateful to be able to run a paint scheme that does good for others.”