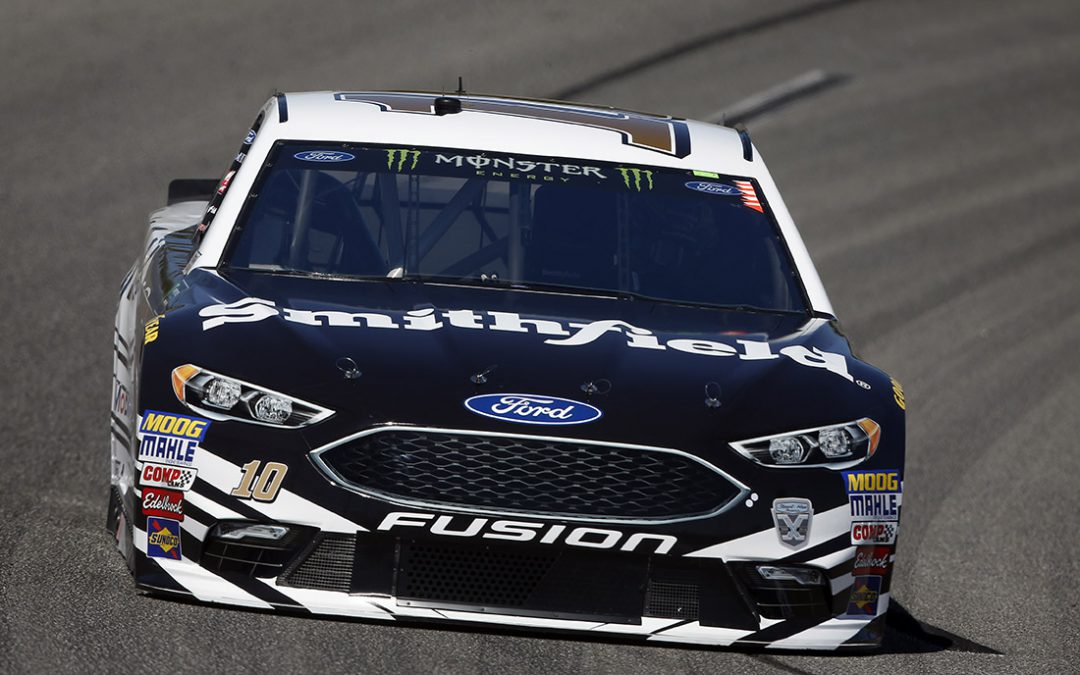 KANNAPOLIS, North Carolina (April 25, 2018) – Aric Almirola and the No. 10 Smithfield Ford Fusion team for Stewart-Haas Racing (SHR) continue the current 10-race stretch of the season this weekend at Talladega (Ala.) Superspeedway. Talladega marks the second restrictor-plate track of the season, and Almirola’s third restrictor-plate race of the year after he competed in both the NASCAR Xfinity Series and Monster Energy NASCAR Cup Series at Daytona (Fla.) International Speedway to open the season.

Almirola heads to Talladega after finishing 17th in the Smithfield Ford Fusion last Saturday night at Richmond (Va.) Raceway. The 34-year-old ran as high as second before several late-race cautions caused the field, including Almirola, to get shuffled around.The Smithfield driver had a busy week leading into Talladega with a Goodyear tire test Tuesday at Michigan International Speedway in Brooklyn, as well as a comprehensive satellite media tour Wednesday with Smithfield and five-time world-champion barbecue pitmaster Tuffy Stone to kick off the summer grilling season. Almirola and Stone launched Smithfield’s “Hero of the Grill” campaign in which fans are encouraged to nominate their favorite grill hero by visiting SmithfieldGetGrilling.com. One “Hero of the Grill” nominee will win $5,000. Plus, the first 10,000 nominees will have the chance to see their name featured on Almirola’s No. 10 Smithfield Ford at Richmond (Va.) Raceway in September.

Talladega marks the ninth weekend the Smithfield livery has adorned Almirola’s No. 10 Ford Fusion. Smithfield, a brand of Smithfield Foods, which is based approximately five hours northeast of SHR headquarters in Smithfield, Virginia, is in its seventh season with Almirola and its first with SHR. Founded in 1936, Smithfield is a leading provider of high-quality pork products, with a vast product portfolio including smoked meats, hams, bacon, sausage, ribs, and a wide variety of fresh pork cuts.

Once Almirola arrives at the 2.66-mile Talladega Superspeedway oval, he’ll be focused on one thing – winning. After a heartbreaking finish on the last lap of this season’s Daytona 500, Almirola is looking for redemption. The superspeedways have generally been kind to the native of Tampa, Florida. However, Talladega hasn’t been so generous to SHR. The championship-winning organization is still looking to capture its first win at the track. Talladega is one of only two tracks, with Kentucky Speedway in Sparta being the other, where the Kannapolis, North Carolina-based team is still looking for its first win as an organization.

In Almirola’s 17 Talladega starts, he’s collected two top-five finishes and four top-10s. He’s put together a string of strong results in his last three starts there with finishes of eighth, fourth and fifth, respectively. Additionally, he earned the pole position for the October 2013 race and has led 15 laps.

Almirola has completed five Xfinity Series starts at the Alabama track. His most recent – in May 2017 – resulted in a trip to victory lane while driving the No. 98 Ford Mustang owned by Fred Biagi and Bill DenBeste. Almirola has been successful in his Xfinity starts at Talladega with only one finish outside of the top-10, and he’s completed every lap. Almirola has also accrued four Camping World Truck Series starts with a pair of runner-up finishes – in October 2009 and 2010.

Talladega has been strong for the Ford family of drivers with 26 all-time Cup Series wins at the superspeedway. The manufacturer has also captured eight of the last 11 victories at Talladega. The blue oval has dominated superspeedway races at both Talladega and Daytona with 16 victories in the last 29 events at both venues combined. Ford also swept all four superspeedway races last year and just missed capturing the victory in this year’s Daytona 500 by half a lap after Almirola was powering his way to the start-finish line on the final lap when contact from behind by another competitor resulted in an 11th-place finish.

How great is it to know that Daytona and Talladega aren’t the only places where you have a realistic shot of winning?
“That’s been the most fun and exciting part of Stewart-Haas Racing. Each and every racetrack that we go to I get on the airplane on Thursday and fly to whatever track and I feel like I have a shot to win that weekend. As a company, SHR doesn’t have any weaknesses. They have good speedway cars, short-track cars, good mile-and-a-half cars – good cars for every track. Every track we go to is another opportunity for us to go have a good run and maybe even win.”

Has the move to Stewart-Haas Racing been everything you’ve expected?
“It has been everything I expected and more. I knew that when I was going to join Stewart-Haas Racing it was going to be an opportunity for me to go and prove that I can drive a racecar, and be competitive and run up front. I knew SHR was an incredible organization, I just didn’t know how incredible. Showing up and seeing all 380 employees work so well together, and everybody pulls the rope together in the same direction, and I feel like that makes SHR such a successful place and great place to work at. The work environment is such an incredible place. The people who go to work there wake up every morning and get in their car to go to work and all they care about is building fast racecars that we can go to the track and win in every week.”

John Klausmeier: Crew Chief of the No. 10 Smithfield Ford Fusion:

How do you exploit every aspect of the racecar at a superspeedway?
“We have a technical partner in Mobil 1 that plays an integral role in our success as Stewart-Haas Racing. More than ever, the under-the-hood temperatures have increased this year at Talladega and Daytona because NASCAR has allowed us to run our cars sealed off at much lower ride heights. Mobil 1’s technology and field testing gives us the protection of our engine and drivetrain components when the temperature demands rise. At these restrictor-plate tracks, the drivers are wide open on the throttle the entire lap, so any gain in engine horsepower or friction decrease equates directly to a faster lap time. Mobil 1’s trackside engineers are the liaisons between their labs and the racetrack, helping us optimize the efficiency in our drivetrains in a short lead time. Dating back to winning the pole for the 2013 Daytona 500, there have been many times when lubricants are shipped to the track within a day of their chemists concocting a new blend. That commitment to responding rapidly, coupled with quality, wins races at this level.”