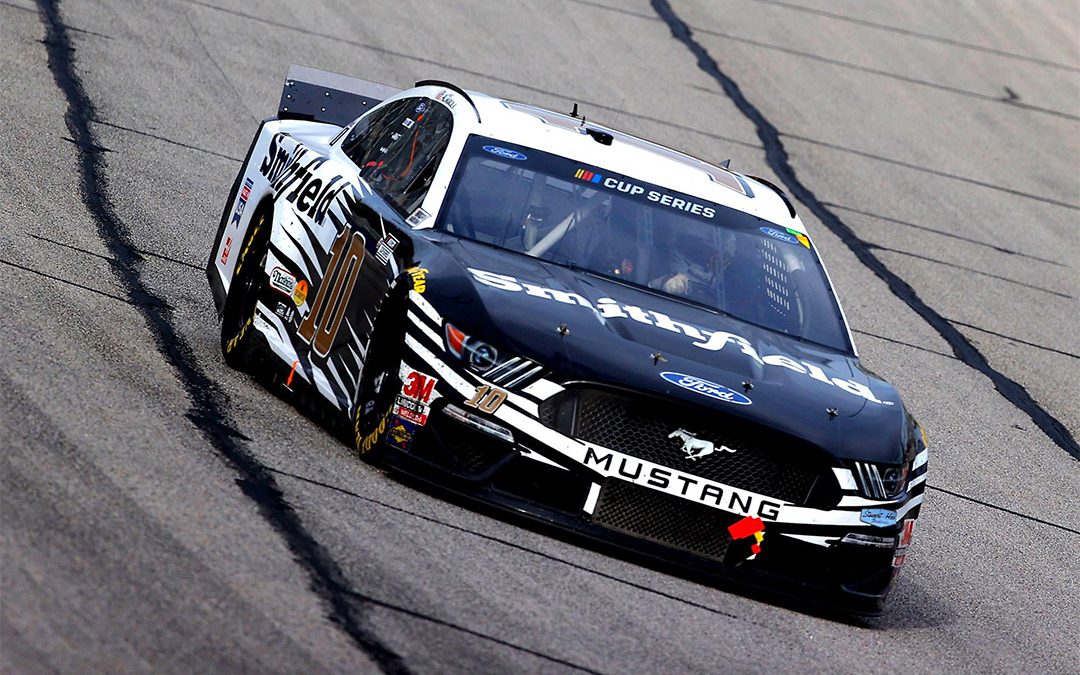 KANNAPOLIS, North Carolina (Sept. 29, 2020) – Aric Almirola, driver of the No. 10 Smithfield Power Bites Ford Mustang for Stewart-Haas Racing (SHR) in the NASCAR Cup Series, is confident heading to Talladega (Ala.) Superspeedway for Sunday’s YellaWood 500 due to his record breaking consistency at the 2.66-mile oval. Most drivers say Talladega’s high-speed and closer-quarter racing make it a “wild-card” event due to the seemingly inevitable multicar accident called “The Big One.” But Almirola is a different breed of superspeedway racers.

He holds the Cup Series’ best average finish of 5.1 in the last eight races at Talladega. His consistency showed when the series last raced there in June. Almirola earned a third-place finish in which he crossed the finish line backward after spinning while vying for the lead. That third-place result tied the record of eight consecutive Talladega top-10s set by Dale Earnhardt Jr., between April 2001 and October 2004.

“Talladega has always been good to me,” Almirola said. “Superspeedways have typically been good to me. We seem to find ourselves in the position to win there more than any track on the circuit, so we feel really good about our chances heading there this weekend.”

Almirola has been there before. Flash back to 2018, Almirola’s first year with SHR, when he was in a similar position at Talladega. On the last lap of that fall 2018 Cup Series race, he held off his teammates Clint Bowyer and Kurt Busch to score what turned out to be the most important win of his career. It secured his spot in the Round of 8 of the NASCAR playoffs, and he went on to finish fifth in the season-ending standings – best of his career.

“That was such an incredible day,” he said, “our first year at SHR and we win at Talladega to advance to the Round of 8. We finished fifth in the overall standings that year, and I think we have an even better team this year. If we can get it done this weekend, or give ourselves the chance to race our way in at Charlotte next weekend, we’ll be serious competitors for the championship.”

Almirola won’t be the only one racing for a win this weekend at Talladega. Smithfield Power Bites, which will adorn the No. 10 Ford this weekend for the first time this year, is hosting a sweepstakes to “power up” race fans as they cheer on Almirola.

Smithfield will be giving away a variety of race-used items and tailgate supplies through the #PowerBitesHere sweepstakes this weekend at Talladega. To be eligible to win, fans will need to follow @SmithfieldBrand on Twitter. Every 10 laps, fans will have the duration of that lap plus one minute to tweet the hashtags #PowerBitesHere and #Sweepstakes to be entered to win the item for that lap of the race. Prizes include a complimentary single-day class at the Ford Performance Racing School in Charlotte, North Carolina, a smoker, Almirola’s Smithfield Power Bites driver uniform from the race, a 2021 VIP race weekend experience, and autographed team gear and tailgate items. Winners will be chosen at the end of the event. Fans will be allowed one entry during every 10-lap increment.

Smithfield’s new Power Bites are fully cooked, heat-and-eat snacking or on-the-go meal solutions consisting of eight tasty bites of sausage, egg, and cheese, offered in a four-ounce portable container. The protein-packed product is a perfect way for meat lovers to enjoy all of their favorite ingredients in one bite to satisfy cravings and curb hunger.

The No. 10 Ford driver’s six top-five finishes this year surpass his previous best of four in a season in 2018. In addition, his 288 laps led is a career-high for a season, and his 17 top-10 finishes has tied his season-best.

Almirola and the No. 10 Power Bites Ford team visit Talladega 11th in the playoff standings, 27 points below the cutoff to advance to the Round of 8.

You have found the most success in your career at superspeedways. Why is that?
“I always had to go to these races and be aggressive because, back in the day, they were our only realistic options to win races. It was the only way I could make it into the playoffs and we were able to do that in 2014. They’ve been good to me. I’ve always gone into those races with that mindset.”

What did it mean to finally win a race in 2018 after nearly winning multiple races but just coming up short?
“The win at Talladega that year was clutch. Going through the season and really being consistent from summer to the playoffs was great. We didn’t really have any devastating races throughout those months and never were a threat to really win races. Then, all of the sudden when the playoffs started, our performance really ramped up. We went into the first few races with chances to win, leading laps and running up front. Even right before that, you look at races like New Hampshire, where we led a lot of laps and felt like we had the potential to win. We kind of pointed our way into the playoffs.”