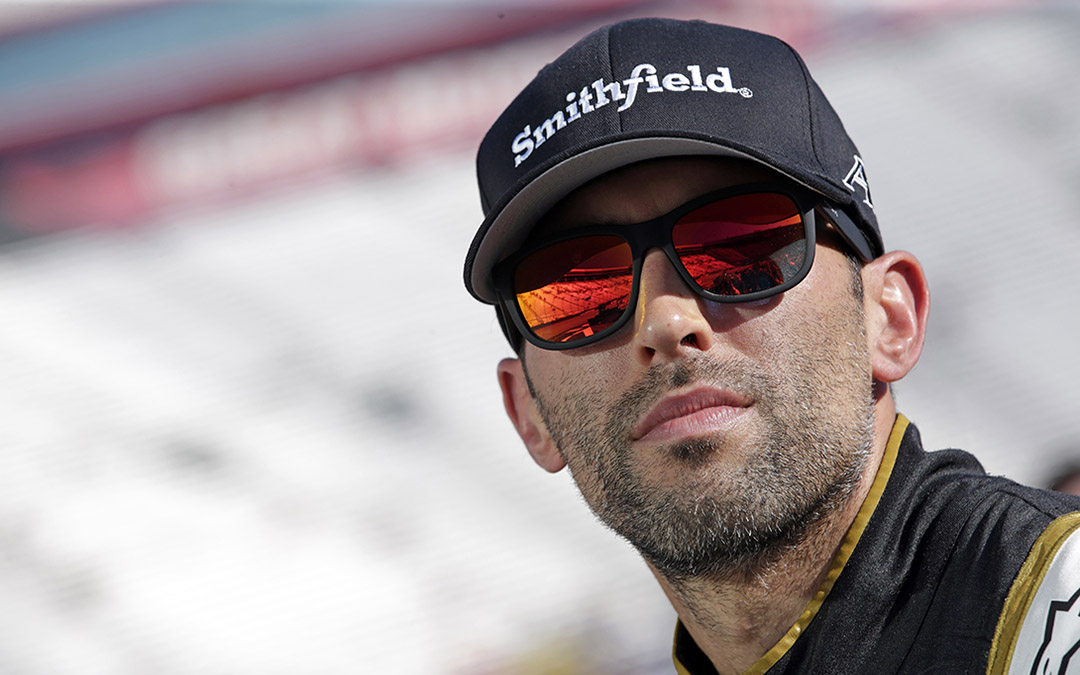 Racin’ for 1 Million Slices of Bacon

KANNAPOLIS, North Carolina (Oct. 8, 2019) – On the last lap of the fall 2018 Monster Energy NASCAR Cup Series race at Talladega (Ala.) Superspeedway, Aric Almirola, driver of the then-Smithfield Bacon for Life Ford for Stewart-Haas Racing (SHR), held off his teammates Clint Bowyer and Kurt Busch to win the most important race of his career. When Almirola crossed the finish line, he secured his spot in the Round of 8 of the NASCAR playoffs and went on to finish fifth in the season-ending standings – the best of his career.

There was sheer excitement over the radio when Almirola took the checkered flag. He screamed, “Woohoo! Yes! We finally did it!” But he was hungry for something else when he stepped out of the car.

While Almirola expressed his relief in being able to advance to the next playoff round during his live, postrace interview, he turned to the roaring crowd and said somebody out there watching was going to win bacon for the rest of his or her life – and someone did. Joseph Craig from Little Rock, Arkansas, was surprised at his home by Almirola this past offseason with a lifetime supply of bacon, and he mimicked Almirola after his Round of 12 win at Talladega (watch here).

Smithfield Foods and Almirola are taking it a step further this weekend by giving more fans the opportunity to win if he wins the race again. This weekend, if the No. 10 Ford driver crosses the finish line first, Smithfield will give 10 lucky fans 100,000 slices of bacon each – a total of 1 million slices. Fans can enter for their chance to bring home the bacon up until the checkered flag flies Sunday at www.racinforbacongiveaway.com.

“There is a definitely extra incentive to win this weekend,” Almirola said with a laugh. “We were pumped last year to win and give one gentleman bacon for the rest of his life. Now, the pressure is on with 10 different fans earning 100,000 slices. Talladega is definitely the most confident track on the circuit for me. Anything can happen there. If we race and have the same luck we have in the past, hopefully we’ll be picking 10 winners come Monday. It would mean so much to our guys who have worked hard all season, as well. We’re not able to battle for a championship, but I know there are still a lot of people rooting for us and I hope to make them proud this weekend.”

In Almirola’s recent start at Talladega last April, he started on the front row and survived the “Big One” to lead 27 laps and finish ninth. It was his seventh top-10 in the first 10 races of the season.

In his last five starts at the 2.66-mile Talladega oval, he’s earned three top-five finishes and six top-10s in addition to last October’s win. In his 19 Cup Series starts there, an accident ended his day prematurely just once. In the typically accident-mired event, he’s led a total of 43 laps. Almirola’s first career Cup Series victory was captured in 2014 at Talladega’s sister track, Daytona (Fla.) International Speedway.

The Tampa native has also found his way to victory lane at the Alabama track in the NASCAR Xfinity Series. In 2017, he led 13 laps before going on to capture the victory while piloting the No. 98 Ford for Biagi-DenBeste Racing.

Almirola is literally looking to bring home the bacon this weekend in the form of a win and 1 millions slices of delicious Smithfield bacon for 10 lucky fans.

Aric Almirola: Driver of the No. 10 Smithfield Racin’ for Bacon Ford Mustang for Stewart-Haas Racing:

What did it mean to finally win a race in 2018 after nearly winning multiple races but just coming up short?
“The win at Talladega was clutch. Going through the season and really being consistent from summer to the playoffs was great. We didn’t really have any devastating races throughout those months and never were a threat to really win races. Then, all of the sudden when the playoffs started, our performance really ramped up. We went into the first few races with chances to win, leading laps and running up front. Even right before that, you look at races like New Hampshire, where we led a lot of laps and felt like we had the potential to win. We kind of pointed our way into the playoffs.”

You have found the most success in your career at superspeedways. Why is that?
“I always had to go to these races and be aggressive because, back then, they were our only realistic options to win races. It was the only way I could make it into the playoffs and we were able to do that in 2014. They’ve been good to me. I’ve always gone into those races with that mindset.”