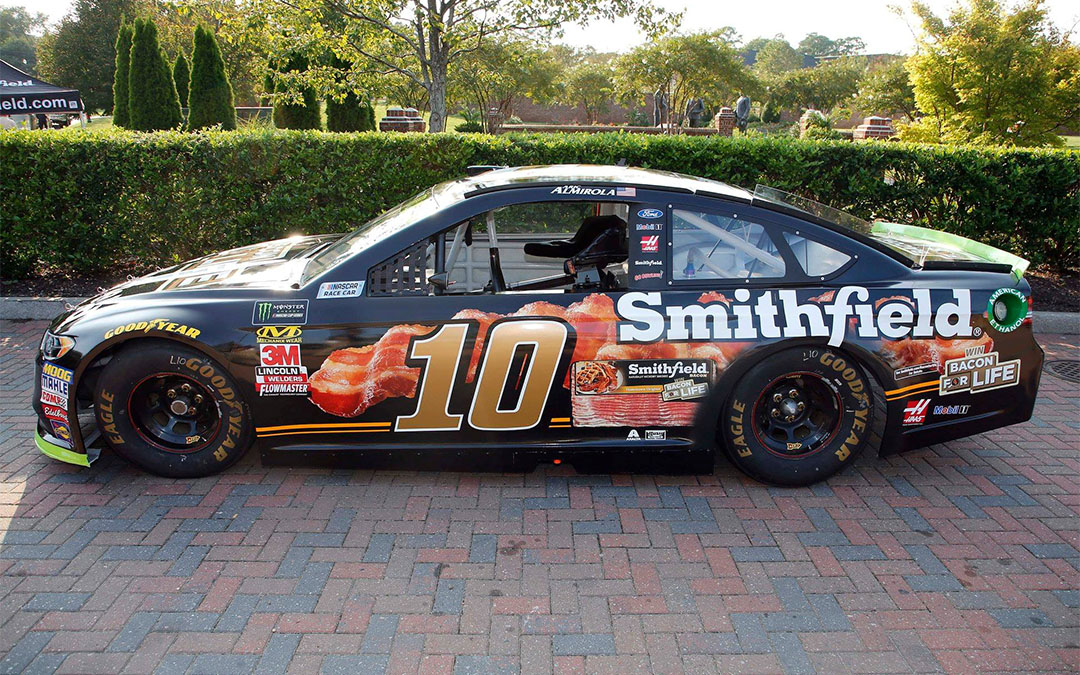 Going for Bacon at Talladega

KANNAPOLIS, North Carolina (Oct. 10, 2018) – Aric Almirola and the No. 10 Smithfield Bacon for Life Ford Fusion for Stewart-Haas Racing (SHR) continue on to Talladega (Ala.) Superspeedway for the second race in the Round of 12 of the Monster Energy NASCAR Cup Series playoffs. Almirola enters the weekend coming off of a 13th-place finish at Dover (Del.) International Speedway, where he led 64 laps and was leading until a late-race restart shuffled him back.

It’s fitting that Almirola will pilot a bacon-themed Smithfield Ford Fusion this weekend. Talladega is a fan favorite when it comes to camping in its infield on NASCAR weekends, and what could be more synonymous with camping than bacon? The special paint scheme coincides with Smithfield’s Bacon for Life promotion. Yes, it’s possible to win bacon for life. To enter the sweepstakes, find specially marked packages of Smithfield bacon in stores and enter the unique code provided in the package by visiting Smithfield.com/BaconForLife. More than 1,000 runners-up will be awarded select bacon merchandise during the sweepstakes, which runs until Dec. 31.

Almirola’s bacon-themed Ford Fusion will hit the track for the first time Saturday morning for the weekend’s only practice session. While Talladega is a wild-card race in the playoffs given its high-speed, pack-style racing, earning maximum stage points during the race will be key for the 34-year-old Almirola in order to advance to the Round of 8 in the playoffs. The final race in the current playoff round takes place next weekend at Kansas Speedway in Kansas City.

In Almirola’s last four starts at the 2.66-mile Talladega oval, he’s earned two top-five finishes and four top-10s. In his 17 Cup Series starts there, an accident has ended Almirola’s day prematurely only once. In the typically accident-mired event, he’s led a total of 15 laps and has an average finish of 17.2. Almirola’s one career Cup Series victory was captured in 2014 at Talladega’s sister track, Daytona (Fla.) International Speedway.

The Tampa native has already found his way to victory lane in his career at the Alabama track. In 2017, Almirola led 13 laps in the Xfinity Series event before going on to capture the victory there while piloting the No. 98 Ford for Biagi-DenBeste Racing.

Almirola heads into Sunday’s race ninth in the standings with 3,033 points, 10 points outside the Round of 8 cutoff. This is the furthest Almirola has ever advanced in the playoffs during his seven-year Cup Series career. All four SHR entries are competing in the Round of 12 this season, making up 33.3 percent of the remaining playoff field.

With the season winding down, fans can still enter for their chance to win Smithfield’s Smoke Machine Mustang designed by team co-owner Tony Stewart with the help of drifting champion Vaughn Gittin Jr. They helped create a one-of-a-kind Ford Mustang RTR Spec 3 that will be given away to one lucky fan. Fans can register for their chance to win the suped-up Mustang and a trip to November’s Ford Championship Weekend at Homestead by visiting SmithfieldRacing.com, or by texting SMOKE to 82257.

Talladega is the 28th points-paying event during which the Smithfield livery has adorned Almirola’s No. 10 Ford Fusion. Smithfield, a brand of Smithfield Foods, which is based approximately five hours northeast of SHR headquarters in Smithfield, Virginia, is in its seventh season with Almirola and its first with SHR. Founded in 1936, Smithfield is a leading provider of high-quality pork products, with a vast product portfolio including smoked meats, hams, bacon, sausage, ribs, and a wide variety of fresh pork cuts.

Through the first 30 races this season, Almirola has an average start of 17.2 and an average finish of 13.9 with two top-five finishes and 12 top-10s. He’s also led 180 laps this season, already a career best with six races remaining.

Aric Almirola: Driver of the No. 10 Smithfield Bacon for Life Ford Fusion for Stewart-Haas Racing:

You had a strong weekend at Dover but didn’t get the win. How do you view Talladega now?
“It would’ve been nice to seal the deal at Dover last weekend and not have to worry about Talladega, but that didn’t work out, so now we have to go race. I think for us being in the position we’re in, we can’t just ride around and be cautious and let those guys score stage points without us scoring stage points. Hopefully, we’ll have some luck on our side and we’ll stay out of the big one and score stage points, and really be on offense.”

With the speed you have shown at restrictor-plate tracks and 1.5-mile tracks, does that ease the nerves or the weight on your shoulders a little bit?
“No, not really. It’s that part of the year and we’re all racing for a championship and it’s really high stakes. Everybody is on edge, everyone wants to be aggressive and score all the points they can. We saw at the end of Charlotte that every point and position matters. Talladega is going to be no different. I have had some great races at Talladega and won an Xfinity race there, run top-five quite a few times in the Cup Series. It has been a good place for me, but it’s still the unknown. You can get caught up in a wreck that had nothing to do with you, or you could be the cause of the wreck. Things just happen when you’re running 200 miles per hour and an inch apart from each other for three hours. One mistake and it usually collects a lot of people. You just have to hope you’re in the right place at the right time. If we are, it could be a good day for us.”

• Almirola will be made available to the media on Saturday at 9:15 a.m. local time in the media center deadline room at Talladega.

• The No. 10 Ford Fusion will sport a special Bacon for Life livery this weekend at Talladega. One lucky person will win bacon for life by purchasing a specially marked package of bacon and entering the code on Smithfield.com/BaconForLife.

• The SHR team is the only four-car organization with all of its entries locked into the NASCAR Cup Series playoffs.

• Ford has 15 wins this season with 10 of the victories coming from the SHR camp – Harvick with seven, Clint Bowyer with two and Kurt Busch with one. Harvick also captured the $1 million
grand prize with a victory at the non-points-paying All-Star Race at Charlotte (N.C.) Motor Speedway.

• Johnny Klausmeier is in his first full-time season as a Cup Series crew chief. The native of Perry Hall, Maryland transitioned from an engineer to Almirola’s crew chief for the 2018 season. Klausmeier has one win as a substitute crew chief while filling in for Tony Gibson at Pocono (Pa.) Raceway in June 2016. As a race engineer at SHR, Klausmeier has worked with drivers Ryan Newman, Danica Patrick and, most recently, Kurt Busch.

• Smithfield joined SHR this season and will be the primary partner for the majority of the season on the No. 10 Ford Fusion piloted by Almirola. Founded in 1936, Smithfield is a leading provider of high-quality pork products, with a vast product portfolio including smoked meats, hams, bacon, sausage, ribs, and a wide variety of fresh pork cuts.