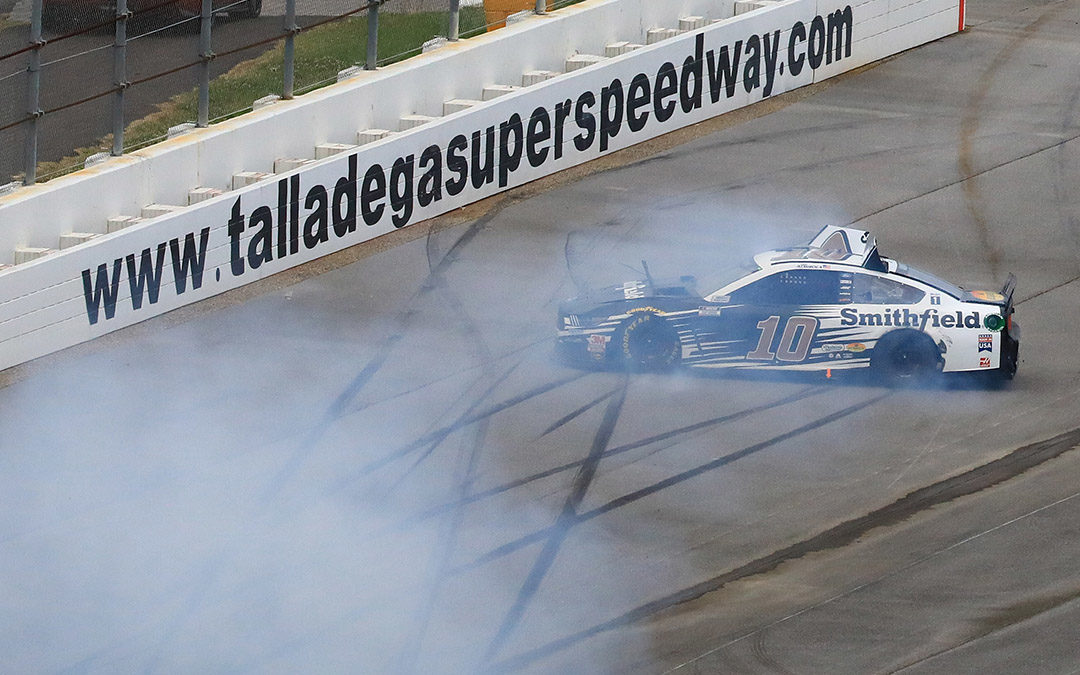 Stage 1 Recap (Laps 1-60):
● Aric Almirola started 15th and finished 25th.
● After racing three wide in the first 10 laps, Almirola decided to drop out of the lead pack to avoid potential contact.
● He pitted the No. 10 Smithfield Ford after the competition caution on lap 27 for four tires, fuel and adjustments.
● The red flag was waved on lap 57 due to inclement weather.
● When racing resumed, Almirola pitted at the end of the stage for four fresh tires and fuel.

Stage 2 Recap (Laps 61-120):
● Almirola started 19th and finished 25th.
● The No. 10 Ford Mustang driver raced back to the top-10 on lap 65.
● Almirola raced his way to the top-five on lap 75.
● Almirola moved to the high line on lap 85, but was demoted out of the lead pack with no push from behind.
● He pitted under caution on lap 97 for four tires and fuel to restart 20th.
● Almirola pitted on lap 115 for four tires and fuel. He pit again to restart 31st for the two-lap shootout. He pitted for fuel only at the end of the stage and gained 17 positions.

Final Stage Recap (Laps 121-191):
● Almirola started 11th and finished third.
● Almirola pitted after a lap-133 caution for four tires and fuel to restart 21st.
● The No. 10 Ford pitted again on lap 145 under another caution for fuel only. He restarted 11th.
● Almirola raced up to third after the restart.
● He charged towards the lead with six laps to go, but was left in the outside lane with no help and fell to 21st.
● The caution was called with three laps to go. Almirola was told he was good on fuel and stayed out of the pits to restart 11th.
● The caution was called on lap 187 to put the race in overtime. Almirola did not pit.
● On the final overtime lap, Almirola wedged his Smithfield Ford into the middle lane and had a run to potentially take the checkered flag. When he turned to block the No. 47 car he was contacted in the left rear, sending the car spinning and crossing the finish line backwards.

Aric Almirola, driver of the No. 10 Smithfield Ford Mustang for Stewart-Haas Racing:
“So close. Man that was fun. We took the strategy of riding around to survive and be there in the end, so we would have a shot to win. We did exactly that. We executed our plan and came up so close to winning that. Crossed the finish line backwards to finish third. I thought we were going to win that one going through the tri-oval and coming to the start/finish line. I had a head of steam and almost got it. Our Smithfield Ford Mustangs have been fast. Two top-five finishes in a row and on to the double-header at Pocono, so just proud of the momentum we have right now. Proud of our team and all of our partners. Smithfield, Go Bowling, Mobil 1, Ford, Shady Rays and Wheels up. Gosh I wish we had another win at Talladega, but we’ll move on to Pocono and try and win a couple there.”

Notes:
● Almirola earned his second top-five and fifth top-10 of the season, and his fifth top-five and ninth top-10 in 21 career NASCAR Cup Series starts at Talladega.
● This was Almirola’s second straight top-five. He finished fifth last Sunday at Homestead-Miami Speedway.
● This was Almirola’s second straight top-five and eighth straight top-10 at Talladega. He finished fourth in the series’ previous visit to the track last October.
● With his eighth straight top-10 at Talladega, Almirola ties the track record for most consecutive top-10s – a mark set by Dale Earnhardt Jr., between April 2001 and October 2004.
● Almirola’s eight consecutive top-10s at Talladega are the most among active NASCAR Cup Series drivers.
● Since joining SHR in 2018, Almirola has not finished outside the top-10 at Talladega, a mark highlighted by a win in October 2018.
● Ryan Blaney won the GEICO 500 to score his fourth career NASCAR Cup Series victory, his first of the season and his second at Talladega. His margin of victory over second-place Ricky Stenhouse Jr., was .007 of a second.
● This was Ford’s series-leading seventh NASCAR Cup Series win of the season and its 693rd all-time Cup Series victory.
● This was Ford’s 30th NASCAR Cup Series victory at Talladega. Since October 2014, Ford has won 10 out of the last 12 races held at the track. This is its second straight win at Talladega, as Blaney drove his Ford to victory last October.● There were eight caution periods for a total of 33 laps.
● Twenty-four of the 40 drivers in the race finished on the lead lap.
● Kevin Harvick remains the championship leader after Talladega with a 23-point advantage over second-place Joey Logano.