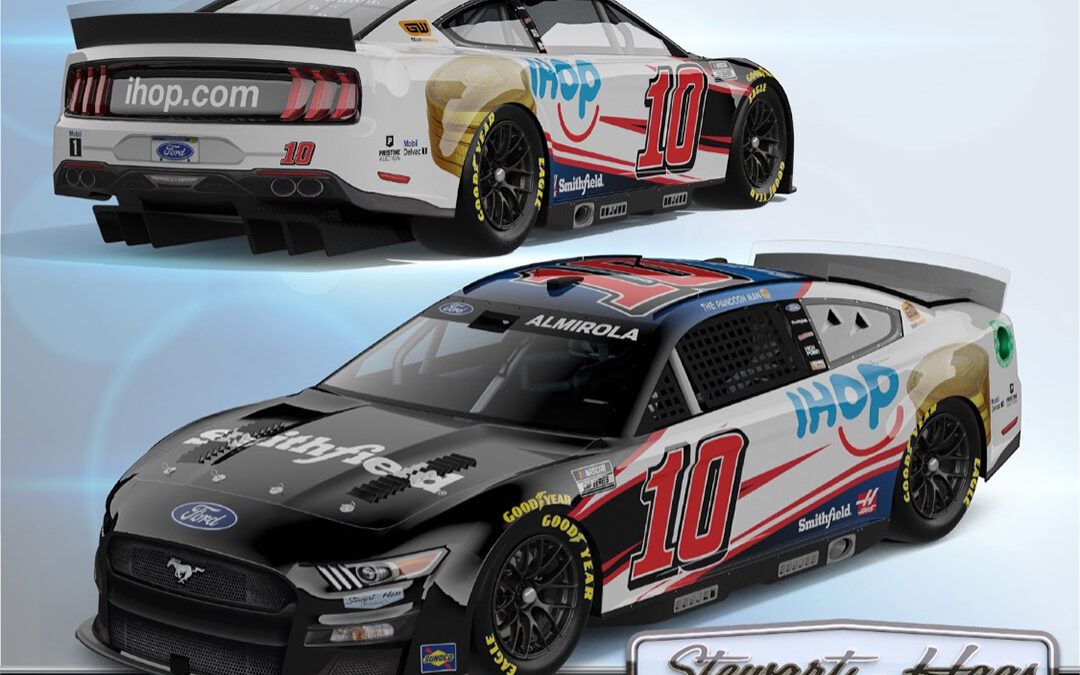 ● History at Talladega: In 24 career NASCAR Cup Series starts, Aric Almirola has one win, nine top-10 finishes, five top-fives, and has led 71 laps at Talladega (Ala.) Superspeedway. In the NASCAR Xfinity Series at Talladega, Almirola visited victory lane in May 2017.

● With his third-place finish in the June 2020 race at Talladega, Almirola tied the record of eight consecutive Talladega top-10s set by Dale Earnhardt Jr., from April 2001 to October 2004. Despite seeing his streak come to an abrupt end thanks to a multicar accident on lap 57 of the October 2020 race on the 2.66-mile oval, Almirola’s average finish in his last 10 Talladega outings is 11.1 – best in the NASCAR Cup Series.

● Almirola has already shown strength in the NextGen car at superspeedways this year. In the season-opening Daytona 500, Almirola had a strong run before crossing the finish line fifth. Last month, on the newly repaved and reconfigured Atlanta Motor Speedway oval, which now races like a superspeedway, Almirola led six laps before he was spun while leading the inside lane, ultimately damaging the car and placing him 22nd.

● Points: Almirola arrives at Talladega 12th in the driver standings with 237 points, 87 out of first.

● IHOP will adorn the No. 10 Smithfield Ford this weekend with a specialty paint scheme. IHOP is launching the International Bank of Pancakes, the brand’s first loyalty program designed to spread joy to guests. Unlike other banks that keep their fortunes under lock and key, IHOP is opening the vaults to share the wealth and spread happiness with its most loyal guests. To sign up, customers can create an account on IHOP.com or through the IHOP Mobile App. Guests can earn PanCoins – digital tokens they can redeem for rewards. Every $5 spent equals one PanCoin, or one pancake. Three PanCoins equal one Short Stack of Buttermilk Pancakes, while five PanCoins equal one Full Stack. PanCoins are housed on the Stack Market, where they can be traded for a coupon to use on a variety of tasty assets. In addition, Almirola’s name is replaced with “The PanCoin Man” on the door frame of his racecar.

Aric Almirola, Driver of the No. 10 Smithfield/IHOP Ford Mustang for Stewart-Haas Racing:

You had success at the season-opening Daytona 500 and you ran up front at Atlanta. How confident are you heading to Talladega?
“We’re as confident this year as ever. We’ve run up front at Daytona and Atlanta this year. We had a shot at the Daytona 500 win at the end there, and we were in a position to race for a win at Atlanta before we were taken out toward the end. If we can continue to avoid the inevitable wrecks, we’ll be there again. I have no doubt about that.”

What is your favorite memory of your career?
“I would say so far to date, my highlight was winning in 2018 at Talladega. It was my first win for Stewart-Haas Racing. It was the first win for Smithfield since joining Stewart-Haas Racing. It happened in the playoffs, coming off of a race where I felt like I should have won at Dover and I didn’t. And then we rebounded and backed it up with a win at Talladega and it catapulted us into the next round of the playoffs, where we eventually went on to finish fifth in the points championship. So it was a phenomenal year and that race at Talladega was a very pivotal moment.”

Stewart-Haas Racing dominated that 2018 Talladega race. Why was that?
“So often you go into a race weekend, especially at a superspeedway where you have a plan and you start thinking about, like, ‘Alright, this is this is our plan. This is when we’re going to pit together. This is what we’re going to do on the racetrack together.’ And rarely does that ever work out, right? It never pans out. We show up and we all start racing for ourselves and we don’t work together at all. So that was an incredible weekend to where we showed up and we had incredibly fast racecars, which made it way easier to work together. And then we started the race with all of us working together and kind of dominating the race, and we realized, ‘This is going to pay off, like, this is going to work out and pay off. So we need to stay to this plan,’ and I think that’s really what helped it. Oftentimes, when you come up with a plan and you start working together and the next thing you know, you find yourself in the middle of the pack, you’re like, ‘Oh, this isn’t working,’ and you abandon the plan, you jump ship. So for the fact that we had fast racecars and our plan was working and we were dominating the race, it made it very easy to stay to the plan.”