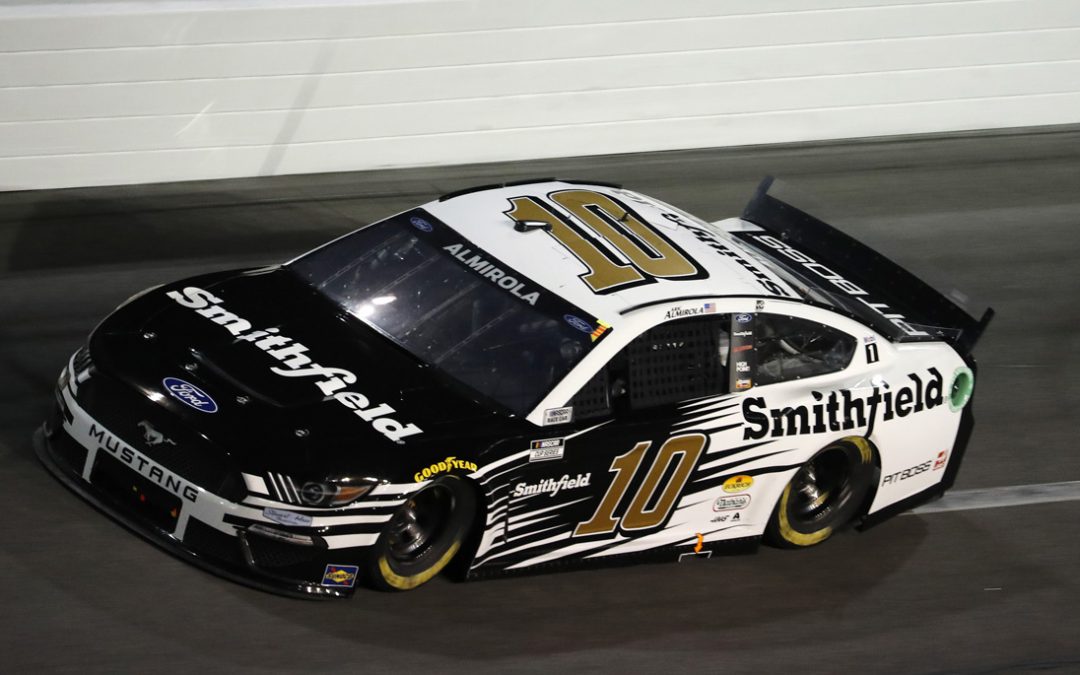 ● With his third-place finish in the June 2020 race at Talladega (Ala.) Superspeedway, Aric Almirola tied the record of eight consecutive Talladega top-10s set by Dale Earnhardt Jr., from April 2001 to October 2004. Despite seeing his streak come to an abrupt end thanks to a multicar accident on lap 57 of last October’s race on the 2.66-mile oval, followed by his 15th-place finish there April 25, Almirola’s average finish in his last 10 Talladega outings is 9.3 – best in the NASCAR Cup Series.
● History at Talladega: In 23 career starts, Almirola has one win, nine top-10 finishes, five top-fives, and has led 71 laps. In the NASCAR Xfinity Series at Talladega, Almirola visited victory lane in May 2017.
● Last weekend at Las Vegas Motor Speedway, Almirola ran as high as eighth place before finishing 19th. It was his eighth Las Vegas top-20.
● Almirola locked himself into the 2021 NASCAR Cup Series playoffs with his July 18 victory at New Hampshire Motor Speedway in Loudon. He led 46 laps around the flat, 1.058-mile oval en route to his third career NASCAR Cup Series win. After a year full of adversity and bad luck, the victory put the No. 10 team, which was 27th in the standings and facing a must-win situation if it was going to compete for this year’s championship, in prime position to earn one of the 16 coveted berths in the 10-race playoffs. Almirola’s award-winning YouTube series “Beyond the 10” captured his entire race day here.
● Although Almirola did not advance to the Round of 12, this year marked his fifth playoff appearance and fourth consecutive playoff appearance since joining Stewart-Haas Racing (SHR). While he can no longer compete for a championship, Almirola has set his sights on a top-10 points position after the checkered flag drops at the season finale Nov. 7 at Phoenix Raceway. Fans and media can watch the “Beyond the 10” episode of his playoff run on YouTube here.
● Smithfield celebrates 10 years of partnership with Almirola this season with a special campaign called Taste Victory.As one of the most active partners in NASCAR, Smithfield engages fans all year long by hosting a microsite that provides the opportunity to win when Almirola wins or finishes inside the top-10. When Almirola wins, one fan wins $10,000, and 10 fans win a gift card for each top-10 finish. The microsite also doubles as an Aric Almirola fan page and entertainment source where fans can get behind the wheel of the No. 10 Smithfield Ford with a custom racing game, and learn more about Almirola with fast facts, favorite recipes and custom content about his life on and off the track. Visit www.tastevictory.com to learn more. Thanks to Almirola’s Feb. 11 win in his Duel qualifying race for the Daytona 500 and his July 18 win at New Hampshire, two lucky fans have already won $10,000 each.
● Career Stats: Almirola has career totals of three wins, two poles, 26 top-five finishes, 82 top-10s and 893 laps led in 382 NASCAR Cup Series starts.
● Beyond the 10 YouTube Series: In 2021, Almirola continues to share his life beyond the No. 10 Ford with season three of his award-winning YouTube series. Fans and media can subscribe on YouTube to see Almirola’s personality on and off the track. Episodes have already featured life as a dad, a husband and an athlete, and it gives fans a unique perspective on what goes on in the life of a professional NASCAR driver. Fans can also follow Almirola’s social media channels: @Aric_Almirola on Twitter and Instagram, and @AricAlmirola on Facebook.
● Point standings: Almirola is currently 15th in the driver standings with 2,093 points.

What would it mean to you to pull off another win this year, especially at a track that you’ve seen so much success at in the past?
“It would really just solidify this season for us. We came into the year expecting to compete for multiple wins. Our year as a whole has not been what we expected, but to put another win under our belt for 2021 would give us such a sense of accomplishment. It would mean the world to put Smithfield in victory lane again there, too. We have a few other races left this season that we can be competitive at, but Talladega is always circled on my list.”

What is it about Talladega that clicks with you so well?
“I always had to go to these races and be aggressive because, back then, they were our only realistic options to win races. It was the only way I could make it into the playoffs and we were able to do that in 2014. They’ve been good to me. I’ve always gone into those races with that mindset. It’s such a high-speed chess match and I like that about these tracks. I like the strategy aspect, but you just have to be at the right place at the right time and we’ve been able to do that a lot.”

Walk us through that Talladega win in 2018.
“I just so happened to be the guy who ran third and fourth the whole race and saved a ton of fuel. Kevin (Harvick) was going to line up third and the plan was that we were going to finish one-two-three-four as an organization. Harvick ran out of fuel and the plan was over. I knew I was on my own. Paul Menard gave me a hell of a push and I got to second. When I heard they were wrecking behind me, I thought I would finish second, but I kept it wide open because my spotter told me to keep digging. I ran Kurt (Busch) down and I didn’t know if I was going to beat him, but I was damn sure going to make it exciting. When I pulled next to him, I heard his car starting to run out of fuel. We finally won after a strand of bad luck that year.”