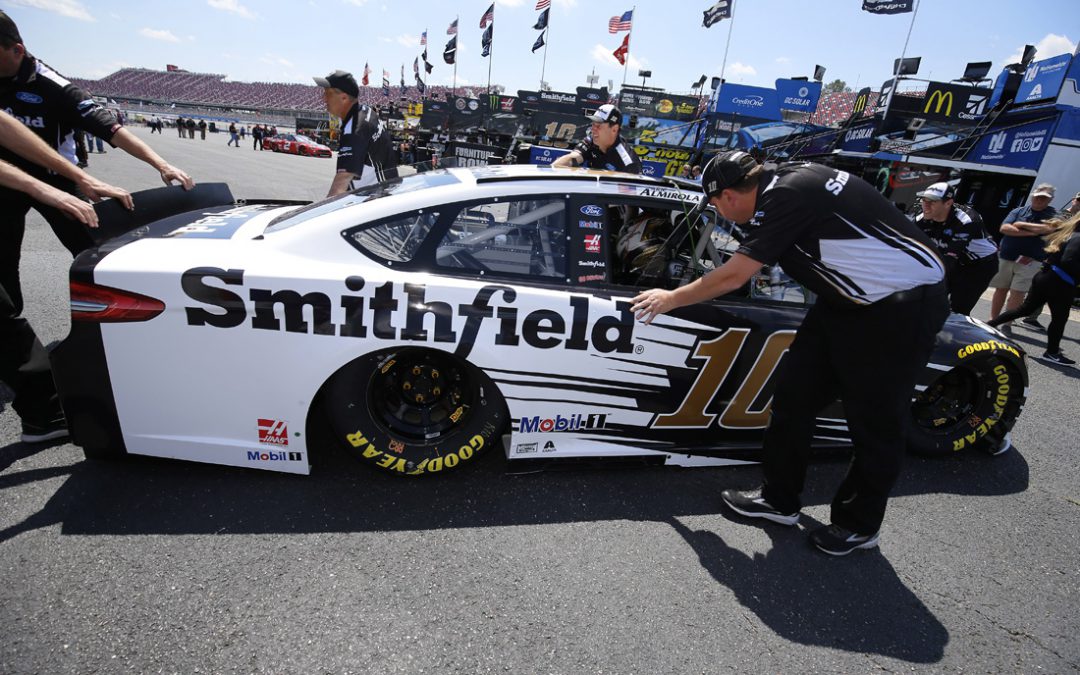 Stage 1 Recap (Laps 1-55):
● Aric Almirola started Stage 1 in the 40th position at Talladega Superspeedway and ended it in the 23rd spot.
● By lap four, Almirola had already gained 15 spots on the 40-car field.
● The Tampa native made his first stop of the day on lap 44 from the 13th position. He received fuel, two right-side tires and adjustments to the Smithfield Ford after reporting it was “a little loose in and a little tight off of turn four.”
● In an 11-lap sprint to the finish of Stage 1, Almirola ended up 23rd in his Ford Fusion.

Stage 2 Recap (Laps 56-110):
● Before the start of Stage 2, Almirola visited pit road for four tires, fuel and adjustments. He started the second stage in the 22nd position and ended the stage in 20th.
● Early in the stage on lap 67 Almirola made a scheduled green-flag pit stop from 26th along with most of the field for fuel only.
● On lap 73 the second caution of the race came out, and Almirola once again visited pit road for fuel, four tires and adjustments to help with his loose-handling condition.
● He restarted 15th on lap 78 and continued to jockey for positions in the top-20, ultimately finishing Stage 2 in 20th.

Final Stage Recap (Laps 111-188):
● During the caution period for the final stage break, Almirola visited pit road for fuel, four tires and adjustments, and restarted 17th on lap 116.
● On lap 142 Almirola reached the seventh position and pitted for fuel only on lap 145.
● On lap 147 the 34-year-old reached the third position in the Smithfield Ford and reached the second spot on lap 154.
● Almirola survived two cautions later in the race, including an accident that took out seven racecars on lap 166. He restarted from the eighth position on lap 171 and ultimately ended up seventh.

Notes:
● This was Almirola’s fourth top-10 of 2018.
● Almirola earned his fifth top-10 in 17 career Cup Series starts at Talladega.
● Joey Logano won the GEICO 500 to score his 19th career Cup Series victory, his first of the season and his third at Talladega. His margin of victory over second-place Kurt Busch was .127 of a second.
● Ford took six of the top-10 finishing positions.
● There were six caution periods for a total of 29 laps.
● Twenty-two of the 40 drivers in the GEICO 500 finished on the lead lap.

Aric Almirola, driver of the No. 10 Smithfield Ford Fusion for Stewart-Haas Racing:
“It was an unusual Talladega. The cars are a big handful. They keep getting them lower and lower and lower, and we are going faster and faster and faster, but the cars just drive worse. It is a lot harder to run in a big pack three and four-wide all day long. You definitely saw it kind of file out with pit strategy and a lot of that stuff. The one thing that I do know is that the Fords were all really fast, and we had a great Smithfield Ford Fusion the whole weekend. We put ourselves behind in qualifying, but today was a nice way to battle back with a solid day for us. I thought we had a car capable of getting up there and racing for the win, but we got shuffled there on the restarts. Coming from the back to get a top-10 is a good day.”

Next Up:
The next event on the Monster Energy NASCAR Cup Series schedule is the AAA 400 Drive for Autism on Sunday, May 6 at Dover (Del.) International Speedway. The race starts at 2 p.m. EDT with live coverage provided by FS1 beginning with a pre-race show at 12:30 p.m.