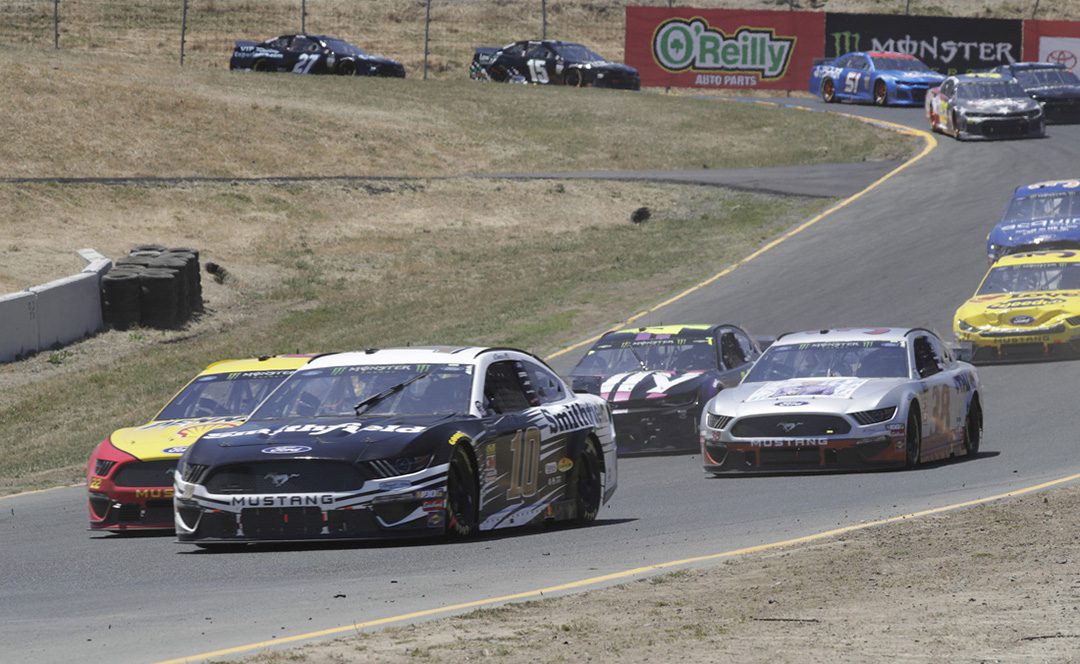 Stage 1 Recap (Laps 1-20):
● Aric Almirola started 13th, finished fifth and earned six bonus points.
● Almirola drove the Smithfield Ford Mustang to the top-10 by lap 15.
● Crew chief Johnny Klausmeier decided to keep the No. 10 Ford out of the pits while multiple cars pitted under green-flag conditions.
● Almirola reported the car was tight into the turns, but Klausmeier said the car was one of the fastest on the track.
● At the end of the stage, Almirola pitted for four tires and fuel. He exited pit road 22nd behind cars that pitted before the stage ended.

Final Stage Recap (Laps 41-90):
● Started 21st, finished ninth.
● Almirola battled the Smithfield Ford Mustang to 16th place by lap 54.
● He pitted on lap 61 under green for four tires, fuel and adjustments to correct tight-handling conditions.
● The No. 10 Mustang driver raced back to 13th place by lap 71.
● In the closing laps, Almirola made his way back to the top-10 and passed teammate Clint Bowyer for ninth place to earn his second-consecutive top-10 at the 2.52-mile road-course.

Notes:
● Almirola earned his ninth top-10 of the season and his second top-10 in eight career Monster Energy NASCAR Cup Series starts at Sonoma.
● Almirola’s ninth-place result was just shy of his previous best finish at Sonoma – eighth in the series’ most recent visit to the track last June.
● Martin Truex Jr. won the Save Mart 350k to score his 23rd career Monster Energy NASCAR Cup Series victory, his fourth of the season, his third at Sonoma and his second straight at the 2.52-mile, 12-turn road course. His margin of victory over second-place Kyle Busch was 1.861 seconds.
● There were only two caution periods for a total of six laps.
● Twenty-four of the 38 drivers in the Save Mart 350k finished on the lead lap.
● Joey Logano remains the championship leader after Sonoma with just a one-point advantage over second-place Busch.
Aric Almirola, Driver of the No. 10 Smithfield Ford Mustang:

“I made a mistake there at the top of turn 3A and spun out and we fell to the rear. After that, I just had to work my butt off to recover. We passed a lot of cars today. My Smithfield Ford Mustang was good today.”

Next Up:
The next event on the Monster Energy NASCAR Cup Series schedule is the Camping World 400 on Sunday, June 30 at Chicagoland Speedway in Joliet, Illinois. The race starts at 3 p.m. EDT with live coverage provided by NBCSN and SiriusXM NASCAR Radio.