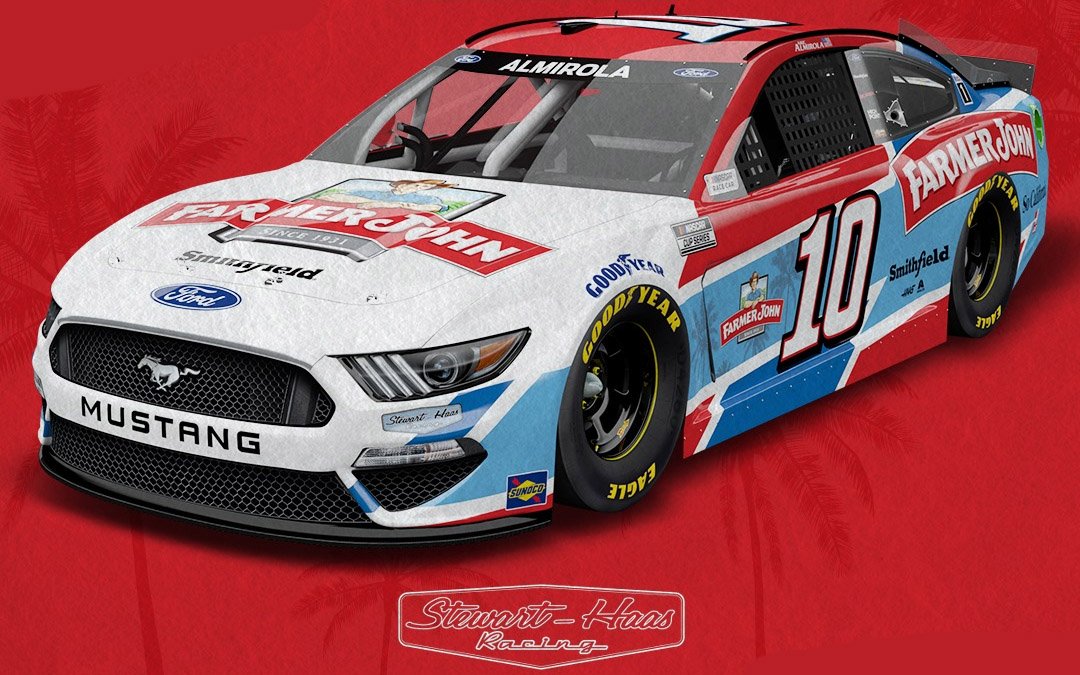 ● Crew chief Mike Bugarewicz visited victory lane at Sonoma (Calif.) Raceway in 2016 with Stewart-Haas Racing (SHR) co-owner and NASCAR Hall of Famer Tony Stewart during his final year as a fulltime driver in the NASCAR Cup Series.
● Road-Course History: Almirola has 24 road-course starts in the NASCAR Cup Series. He has two top-10 finishes at Sonoma with a best finish of eighth, four top-20s at Watkins Glen (N.Y.) International with a best finish of 12th, three top-20s at the Charlotte (N.C.) Motor Speedway Roval with a best finish of 14th, and a top-12 finish in the Feb. 9 Busch Clash on the Daytona (Fla.) International Speedway road course. Statistically speaking, Sonoma has produced the best road-course finishes of Almirola’s career.
● Almirola’s best finish this year was sixth at Richmond (Va.) Raceway, and his next-best finish was 11th at Phoenix Raceway, both of which featured the 750-horsepower, low-downforce package the Cup Series cars will utilize this weekend at Sonoma.
● Pioneering a revolution in the supply of locally flavored meats, Farmer John has been a Southern California staple since 1931. This will be the second time Farmer John has been a primary sponsor on the No. 10 Ford and the first time this specific red, white and blue livery has adorned Almirola’s car.
● Career Stats: Almirola has career totals of two wins, two poles, 24 top-five finishes, 80 top-10s and 842 laps led in 367 NASCAR Cup Series starts.
● Smithfield Foods celebrates 10 years of partnership with Almirola this season with a special campaign called Taste Victory.As one of the most active partners in NASCAR, Smithfield plans to engage fans all year long by hosting a microsite that provides the opportunity to win when Almirola wins or finishes inside the top-10. When Almirola wins, one fan wins $10,000, and 10 fans win a gift card for each top-10 finish. The microsite also doubles as an Aric Almirola fan page and entertainment source where fans can get behind the wheel of the No. 10 Smithfield Ford with a custom racing game, and learn more about Almirola with fast facts, favorite recipes and custom content about his life on and off the track. Visit www.tastevictory.com to learn more. Thanks to Almirola’s Feb. 11 win in his Duel qualifying race for the Daytona 500, one lucky fan has already won $10,000.
● Beyond the 10 YouTube Series:In 2021, Almirola continues to share his life beyond the No. 10 Smithfield Ford with season three of his award-winning YouTube series. Fans and media can subscribe on YouTube to see Almirola’s personality on and off the track. Episodes have already featured life as a dad, a husband and an athlete, and it gives fans a unique perspective on what goes on in the life of a professional NASCAR driver. Fans can also follow Almirola’s social media channels: @Aric_Almirola on Twitter and Instagram, and @AricAlmirola on Facebook.
● The Smithfield Ford team sits 28th in the championship standings with 195 points, 438 behind leader Denny Hamlin.

Aric Almirola, Driver of the No. 10 Farmer John Ford Mustang for Stewart-Haas Racing

How does it feel to get back to Sonoma for the first time since 2019?
“It feels great. Road-course racing has never been my favorite, but there is something about Sonoma that works better for us. It’s our best road course, statistically, and I feel like we have more confidence heading there than others in the past. It’s also a beautiful place to visit. It’s a must-see venue for the race fans.”

Your crew chief Mike Bugarewicz has found success at Sonoma with your boss Tony Stewart. How does this influence you going into the weekend?
“It’s definitely a good feeling since we haven’t been able to race there together, yet. With the pandemic last year, we weren’t able to visit Sonoma in our first year together. We have been able to race a few road courses since, and we feel more confident at those tracks than last year, so we’re optimistic heading into the weekend. We’ll be starting 26th, so we’ve got a long way to go to get to the front.”

What do you need to be successful at Sonoma?
“A lot of patience, and grip. It’s such a technical and slow track compared to Watkins Glen. You really have to hit your marks.”