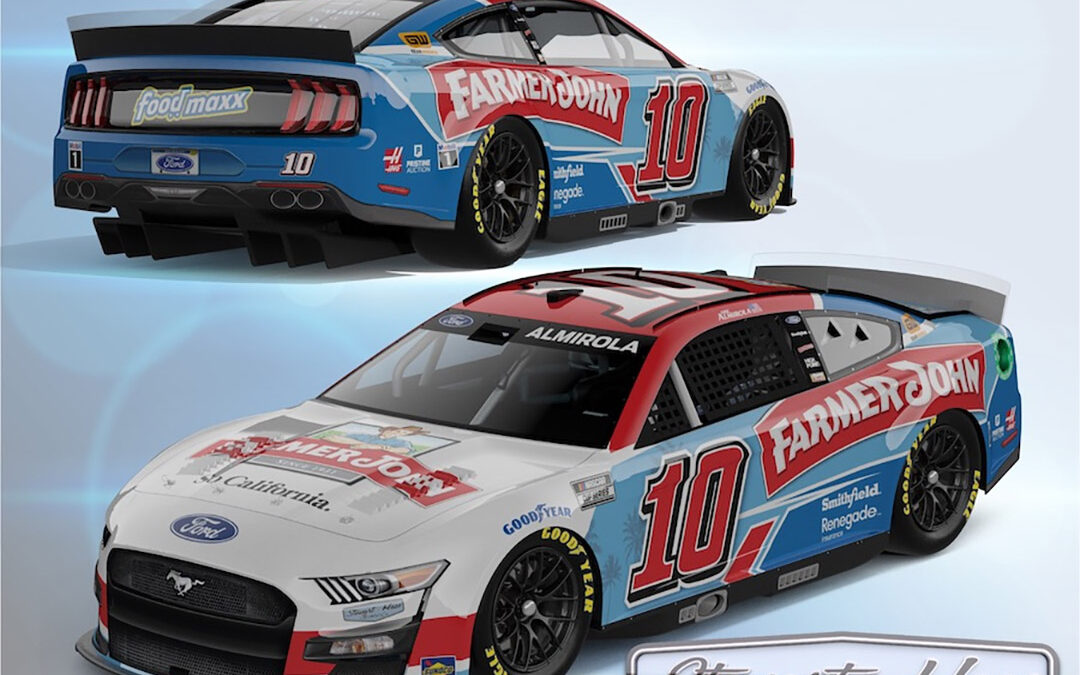 ● After 15 races this season, Almirola is the only driver in the NASCAR Cup Series without a DNF (Did Not Finish). He has completed all but five laps of the 4,240 run this year – a 99.9 percent completion rate.
● History at Sonoma Raceway: In nine starts at Sonoma, Almirola has two top-10 finishes, and he finished on the lead lap in all but one of those nine starts. The 38-year-old earned his two top-10 finishes in his first two starts at Stewart-Haas Racing.
● Last weekend at Gateway International Raceway in Madison, Illinois, near St. Louis, Almirola ran inside the top-10 for the majority of the race, earned 11 stage points, and crossed the finish line fifth to earn his second top-five and fifth top-10 of the season.
● Points: Almirola arrives at Sonoma 11th in the driver standings with 385 points, 122 out of first.
● Pioneering a revolution in the supply of locally flavored meats, Farmer John has been a Southern California staple since 1931. This will be the fourth time Farmer John has been a primary sponsor on the No. 10 Ford and the first time this specific red, white and blue livery has adorned Almirola’s car.
● Almirola’s career: In 403 NASCAR Cup Series starts, Almirola has earned three wins, 28 top-five finishes, 89 top-10s, three poles, and has led 899 laps.
● One More Time: On Jan. 10, Almirola released a video on his YouTube channel announcing his retirement from fulltime NASCAR Cup Series racing after the 2022 season to spend more time with his family. His opening remarks were attributed to his grandfather’s mentorship. This year marks Almirola’s 11th fulltime Cup Series season. The official press release can be viewed here.
● Beyond the 10 YouTube Series:In 2022, Almirola is once again sharing his life beyond the No. 10 Smithfield Ford with season three of his award-winning YouTube series. Fans and media can subscribe on YouTube to see Almirola’s personality on and off the track. Episodes have already featured life as a dad, a husband and an athlete, and it gives fans a unique perspective on what goes on in the life of a professional NASCAR driver. Fans can also follow Almirola’s social media channels: @Aric_Almirola on Twitter and Instagram, and @AricAlmirola on Facebook.
● Almirola was the only NASCAR Cup Series driver to finish in the top-10 in this year’s opening three races. He finished fifth in the season-opening Daytona 500 at Daytona (Fla.) International Speedway, sixth at Auto Club Speedway in Fontana, California, and sixth at Las Vegas Motor Speedway. Almirola’s top-10 streak ended with a 12th-place finish at Phoenix Raceway despite running inside the top-10 throughout the race.

Aric Almirola, Driver of the No. 10 Farmer John Ford Mustang for Stewart-Haas Racing:

You’re heading to Sonoma with momentum from your most successful race of the season. How does that translate to a road course this weekend?
“We have had top-10 cars for the last handful of races but just couldn’t catch a break. From a cut tire to an untimely caution, we just haven’t been put in the best positions to finish where we run. To have put a full weekend together with no mistakes led us to a top-five and a good bit of stage points. It’s nice to head to a road course after this because we didn’t put ourselves in a hole. Our road-course program has steadily improved over time so, heading to Sonoma, we’ll try to have another mistake-free day and see where that lands us. We know what we’re capable of and we have to just put it all together and stay out of trouble.”

What do you need to be successful at Sonoma?
“A lot of patience, and grip. It’s such a technical and slow track compared to Watkins Glen. You really have to hit your marks.”

Do you enjoy road racing, and how do you continue to hone your craft?
“I have enjoyed road racing and I’ve strived to get better at it. Road racing is not something I grew up doing. I grew up racing go-karts on dirt ovals and then I went to stock car racing on asphalt ovals. I never did any road racing at all until I actually got to NASCAR. That was when I got introduced to road racing and I had a steep learning curve to catch up. I have really enjoyed honing my craft at road racing and trying to figure out how to get better.”

What can you take from this year’s first road-course race at Circuit of the Americas with this NextGen car?
“Be there at the end. It’s so competitive now and everyone is hungry. There are a lot of good road racers in the series. Just be there at the end.”