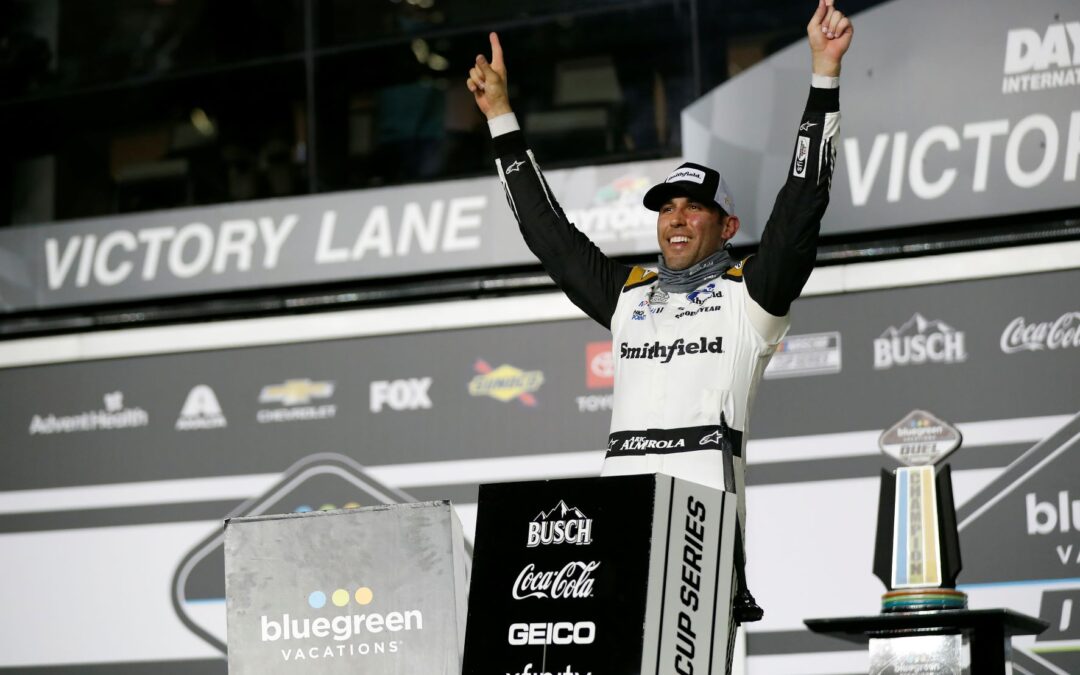 Smithfield To Serve as Anchor Partner of No. 10 Ford Mustang with
Largest Allotment of Races as a Primary Partner Since Joining SHR in 2018

DAYTONA BEACH, Fla. (Aug. 26, 2022) – Smithfield Foods and NASCAR Cup Series driver Aric Almirola will continue their longstanding partnership as both return to Stewart-Haas Racing (SHR) with a multiyear agreement that begins in 2023.

The 2023 season will be the 12th consecutive year that Smithfield has partnered with Almirola and its sixth together at SHR. The renewed pact comes with a significantly heightened presence as Smithfield will be the anchor partner of Almirola’s No. 10 Ford Mustang for the largest allotment of races since joining SHR in 2018.

The extension also marks a turnabout for Almirola. The 38-year-old from Tampa, Florida, came into 2022 ready to relish every moment, for his original plan was to retire at season’s end. In the course of this year, Almirola has discovered a new balance between his passion for racing and dedication to his family. His wife, Janice, and kids, Alex and Abby, join him on most race weekends, oftentimes enjoying once-in-a-lifetime experiences together as they travel the country. His rapport with crew chief Drew Blickensderfer has flourished, and the intense pressure he had put on himself was replaced with the joy of simply being present. Almirola was reinvigorated, and when Smithfield broached the subject of continuing together beyond 2022, Almirola accepted.

“I’ve learned a lot this year and perhaps the biggest learning was to never say never,” Almirola said. “I came into this year ready to soak everything up, and I have. I already knew I had the coolest job in the world, but being with my family and being there for Janice and Alex and Abby was really important. My desire to compete and win never wavered, but I didn’t want it to come at the expense of family. We found a way to accommodate both and I’ve never been happier.

“Smithfield is a big part of that. They’ve been a part of my life for 11 years and, really, my entire NASCAR Cup Series career. They’re family to me. And, of course, it’s always nice to be wanted. Smithfield wanted me to continue representing them. Stewart-Haas Racing wanted me to continue driving their racecars. Everything just aligned and it’s something we all embraced.

“The original decision to step away from fulltime racing at the end of the season was a family one, and so is this decision. Janice, Alex and Abby are just as excited as I am to continue racing the No. 10 Smithfield Ford Mustang.”

The Smithfield/Almirola pairing is one of the most tenured in NASCAR. Almirola teamed up with Smithfield in 2012 while at Richard Petty Motorsports for his first full year in the NASCAR Cup Series. Almirola and Smithfield moved to SHR in 2018 where the two immediately found success, making the NASCAR Playoffs, winning in October at Talladega (Ala.) Superspeedway and finishing a career-high fifth in points. Almirola went on to score a career-best 18 top-10 finishes in 2020 before earning another victory in 2021 at New Hampshire Motor Speedway in Loudon to put him into the playoffs for a fourth consecutive season.

“Aric has been a part of the Smithfield family for more than a decade and we’re very happy to have him back in the No. 10 Smithfield Ford Mustang,” said Shane Smith, president and CEO, Smithfield Foods. “Just as Aric discovered new ways to enjoy this sport, Smithfield did too. I was at this year’s Daytona 500 with him and it was electric. NASCAR is exactly where we need to be. It’s where our customers are, and no one reaches them better than Aric Almirola. He’s an incredibly talented racer and devoted family man who embodies Smithfield’s values. From day one, Aric has embraced our commitment to do good for our customers, employees and communities. This is a reinvestment in Aric, in Stewart-Haas Racing and in NASCAR.”

Tony Stewart, co-owner of SHR with Haas Automation founder Gene Haas, was a driving force behind Almirola joining SHR in 2018. Stewart first met Almirola in 2004 when they were teammates at Joe Gibbs Racing. Stewart was already a NASCAR Cup Series champion with the first of his three titles in hand (2002, 2005 and 2011) while Almirola was just beginning his NASCAR career after being selected as one of the first two drivers for Gibbs’ diversity program.

“All of us at SHR are very happy to have Aric back in our Smithfield Ford Mustang,” Stewart said. “I’ve always admired Aric because he’s always working to better himself, to find a better way. This year is proof of that.

“We’re in a tough sport, in terms of the competition and in terms of the commitment it takes to compete at this level. Even with all that, Aric has found a way to compete and enjoy life. That sounds simple, but achieving it is hard, yet Aric makes it look simple. It’s one of his many attributes, and it’s one of the many reasons why he’s such a good fit for Smithfield and for us. I’m proud of him and proud to extend our partnership with Smithfield.”

About Smithfield Foods, Inc.:
Headquartered in Smithfield, Virginia, since 1936, Smithfield Foods, Inc., is an American food company with agricultural roots and a global reach. With more than 60,000 jobs globally, we are dedicated to producing “Good food. Responsibly.®” and serve as one of the world’s leading vertically integrated protein companies. We have pioneered sustainability standards for more than two decades, including our industry-leading commitments to become carbon negative in our U.S. company-owned operations and reduce GHG emissions 30 percent across our entire U.S. value chain by 2030. We believe in the power of protein to end food insecurity and have donated hundreds of millions of food servings to our communities. Smithfield boasts a portfolio of high-quality iconic brands, such as Smithfield®, Eckrich® and Nathan’s Famous®, among many others. For more information, visit www.SmithfieldFoods.com, and connect with us on Facebook, Twitter, LinkedIn and Instagram.