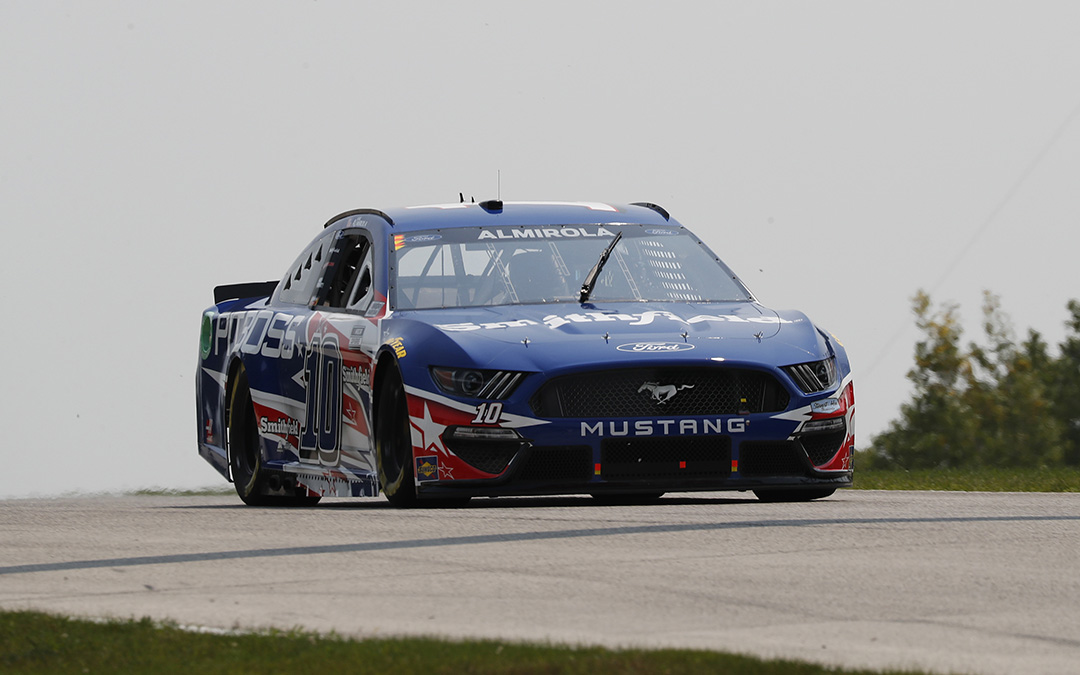 Stage 1 Recap (Laps 1-14):
● Aric Almirola started 19th and finished 35th.
● The caution was called on lap three with Almirola scored 21st.
● The Smithfield/Pit Boss Ford driver pitted on lap 10 from 25th for four tires, fuel and air pressure adjustments.
● Another caution was called while Almirola was on pit road, providing him with multiple spots gained to start Stage 2.

Stage 2 Recap (Laps 15-29):
● Almirola started fifth and finished 28th.
● Almirola said he needed more rear grip and couldn’t get into the braking zones the way he needed to.
● The Smithfield/Pit Boss Ford driver pitted on lap 25 for four tires, fuel and adjustments.
● Almirola was told to save his tires throughout the run and stayed out at the end of the stage.

Final Stage Recap (Laps 30-62):
● Almirola started 13th and finished 14th.
● On lap 42, Almirola radioed that “something came apart” on lap 42. He pitted shortly after for four fresh tires.
● The caution was called when Almirola left pit road again.
● The remainder of the field pitted under caution, promoting Almirola to the lead.
● The Smithfield/Pit Boss Ford driver held his No. 10 Ford inside the top-14 to earn his best road course finish of the season.

Notes:
● Chase Elliott won the inaugural Jockey Made in America 250 to score his 13th career NASCAR Cup Series victory and his second of the season. His margin over second-place Christopher Bell was 5.705 seconds.
● There were four caution periods for a total of nine laps.
● Thirty-four of the 40 drivers in the Jockey Made in America 250 finished on the lead lap.
● Denny Hamlin remains the championship leader after Road America with a three-point advantage over second-place Kyle Larson.

Aric Almirola, driver of the No. 10 Smithfield/Pit Boss Ford Mustang for Stewart-Haas Racing:

“I’ll take a 14th-place finish at a newer road course. Our Smithfield/Pit Boss Ford just needed more rear grip and speed to race with the top guys. We’re continuing to build on our road course program. All of the fans who came out on Fourth of July weekend was awesome to see. On to Atlanta.”

Next Up:
The next event on the NASCAR Cup Series schedule is the Atlanta 400 on July 11 at Atlanta Motor Speedway. The race starts at 3:30 p.m. EDT with live coverage on NBCSN and SiriusXM NASCAR Radio.