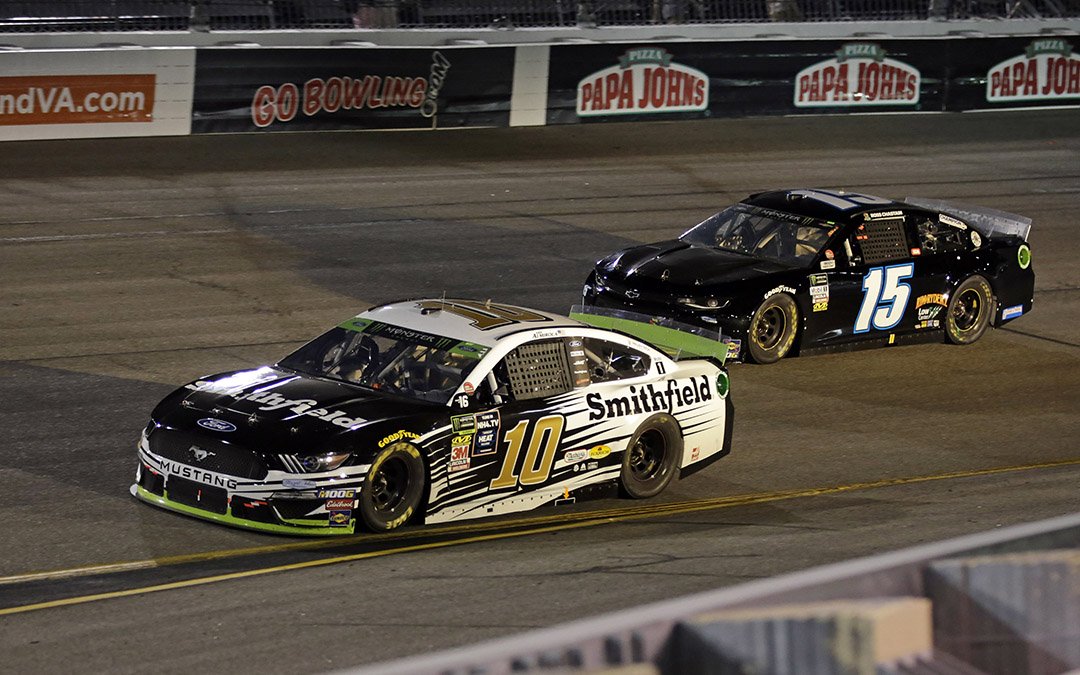 Stage 1 Recap (Laps 1-100):
● Aric Almirola started seventh and finished 12th.
● The Smithfield Ford driver ran inside the top-10 for the majority of Stage 1, but he said his No. 10 Ford wouldn’t roll in the middle.
● By lap 81, handling conditions forced Almirola outside the top-10.
● He said the car would not turn and needed air pressure adjustments to correct it.
● He pitted for four tires, fuel and chassis and air pressure adjustments at the end of the stage.

Stage 2 Recap (Laps 101-200):
● Almirola started 12th and finished 16th.
● The No. 10 Smithfield Ford pitted for chassis adjustments under a lap-113 caution and restarted 17th.
● Shortly after the changes were made Almirola said the No. 10 Ford still struggled to turn and was loose.
● Almirola fought handling conditions for the remainder of the stage but was able to hold the Smithfield Ford on the lead lap.
● He pitted at the conclusion of the stage for four fresh tires and fuel, and the team reversed adjustments previously made.

Final Stage Recap (Laps 201-400):
● Almirola started 16th and finished 16th.
● Almirola raced inside the top-15 before the caution was called on lap 243.
● He noted that the handling of the car was the best it had been all night.
● Under caution, Almirola pitted for four tires, fuel and adjustments. He was handed a speeding penalty and forced to the rear to restart 20th.
● Almirola pitted on lap 313 for four fresh tires and fuel. While he was on pit road the caution was called, putting him a lap down.
● He earned the Lucky Dog and pitted again for a large swing on adjustments before returning to the track in 16th.
● Almirola continued to battle for position until the end despite the difficult handling of his No. 10 Smithfield Ford.

Notes:
● Almirola earned his 23rd top-20 of the season and his 12th top-20 in 16 career Monster Energy NASCAR Cup Series starts at Richmond.
● This is Almirola’s fourth straight top-20. He finished 13th in the series’ last race at Las Vegas.
● Martin Truex Jr. won the Federated Auto Parts 400 to score his 25th career Monster Energy NASCAR Cup Series victory, his series-leading sixth of the season, his second in a row and his second at Richmond. His margin of victory over second-place Kyle Busch was 2.63 seconds.
● There were five caution periods for a total of 32 laps.
● Only 13 of the 38 drivers in the Federated Auto Parts 400 finished on the lead lap.

“I feel like we brought a spoon to a sword fight tonight. We did everything we could with what we had. The silver lining is that we are three points ahead of the cutoff. Tomorrow is a new day, and our Smithfield Ford team will get focused on the Roval as soon as the sun comes up tomorrow.”

The next event on the Monster Energy NASCAR Cup Series schedule is the Bank of America Roval 400 on Sunday, Sept. 29 at Charlotte (N.C.) Motor Speedway. It is the third race of the 10-race playoffs and the last race in the Round of 16. It starts at 2:30 p.m. EDT with live coverage provided by NBC and SiriusXM NASCAR Radio.