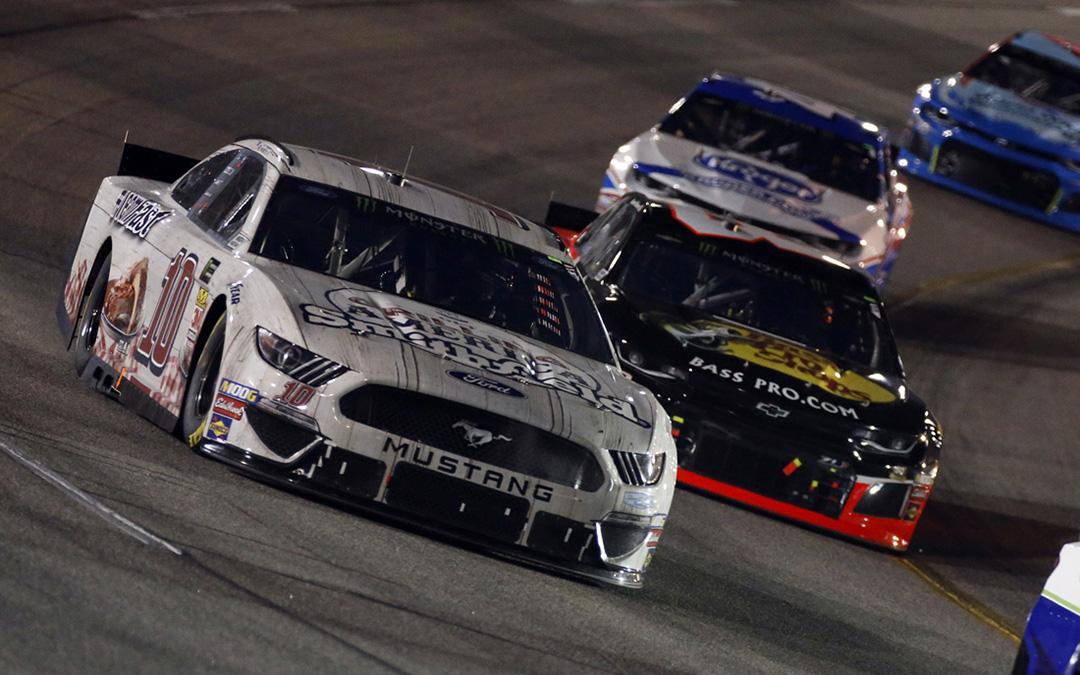 Stage 1 Recap (Laps 1-100):
● Started 31st, finished 19th.
● Aric Almirola drove the Smithfield Get Grilling America Ford Mustang to 25th place by lap 28.
● During the competition caution on lap 40 he noted loose-handling conditions and said he needed more drive off of the turns. He pitted for four fresh tires, fuel
and chassis adjustments.
● Almirola said the front end of his No. 10 Ford felt too high and caused him to race too tight in traffic.
● He pitted at the end of the stage for four tires, fuel and wedge and air pressure adjustments.

Stage 2 Recap (Laps 101-200):
● Started 23rd and finished 16th.
● On lap 115, Almirola made slight contact with the No. 42 of Kyle Larson when his right-front tire was smoking.
● Almirola was scored 19th before a caution on lap 127. He pitted for four tires, fuel and adjustments and advanced to 17th.
● He entered the top-15 on lap 171 but said he needed to turn better off the corners.
● Almirola pitted the No. 10 Smithfield Ford for four more tires, fuel and adjustments.

Stage 3 Recap (Laps 201-400):
● Started 19th and finished 23rd.
● Almirola raced as high as 14th until he pitted under green-flag conditions on lap 247 for four tires, fuel and adjustments to help his racecar turn better into the corner.
● When exiting pit road he was assessed a speeding penalty that put the Smithfield Get Grilling America Ford a lap down in 22nd.
● During the closing laps, Almirola was called back to the pits from 18th due to the No. 10 Ford not having enough lug nuts.

Notes:
● Martin Truex Jr. won the Richmond 400 to score his 20th career Monster Energy NASCAR Cup Series victory, his first of the season and his first at Richmond. His margin of victory over second-place Joey Logano was .178 of a second.
● There were five caution periods for a total of 41 laps.
● Only 16 of the 37 drivers in the Richmond 400 finished on the lead lap.
● Kyle Busch remains the championship leader after Richmond with a 20-point advantage over second-place Logano.

Next Up:
The next event on the Monster Energy NASCAR Cup Series schedule is the GEICO 500 on Sunday, April 28 at Talladega (Ala.) Superspeedway. The race starts at 2 p.m. EDT with live coverage provided by FOX and SiriusXM NASCAR Radio.