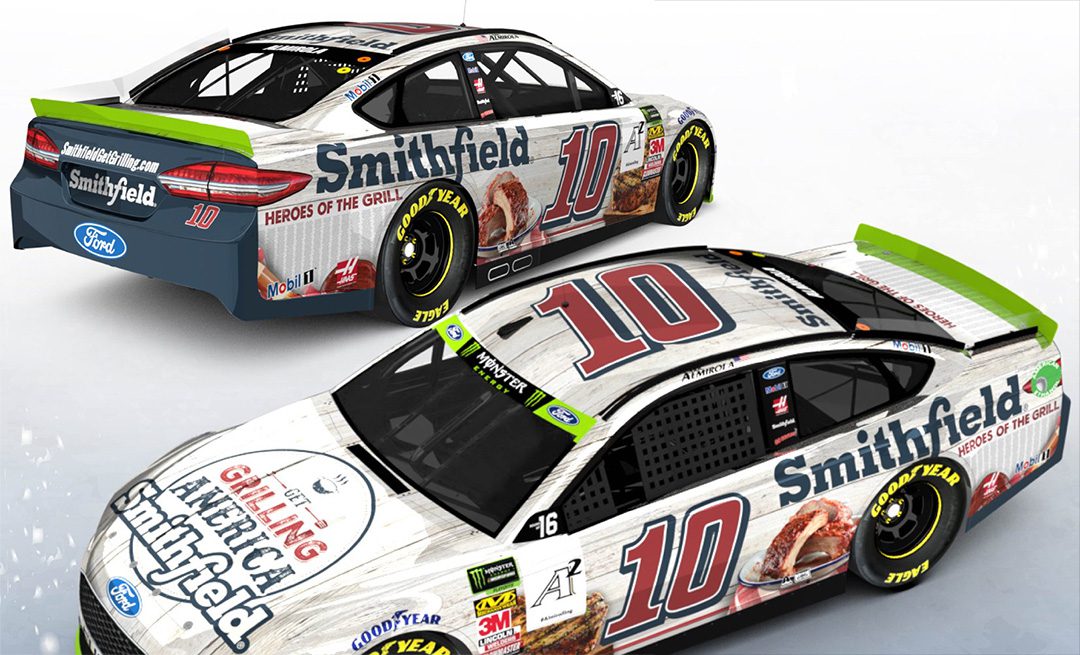 In this year’s April Cup Series event at Richmond, Almirola ran as high as second before ending up 17th. He finished Stages 1 and 2 of the race second and third, respectively and was close to finishing out the event in the top-10 before a late-race restart caused him to go four-wide and get shuffled back to midpack.

Almirola heads into Saturday night’s race, the second in Round 1 of the Cup Series playoffs, ninth in the playoff standings with 2,034 points. The Tampa native is 12 markers ahead of the top-12 cutoff, with the first elimination race the following weekend at the Charlotte (N.C.) Motor Speedway “roval.”

This weekend, Almirola’s Smithfield livery will look a little different from the traditional black, white and gold scheme. The No. 10 Ford Fusion will sport Smithfield’s summer grilling paint scheme. Additionally, fans who submitted their “Hero of the Grill” nominee earlier this season via SmithfieldGetGrilling.com will have their grilling heroes names included on Almirola’s car this weekend.

The three-quarter-mile oval facility at Richmond, which just completed an infield renovation, typically puts on one of the best shows in the sport. The 34-year-old Almirola has six starts at tracks a mile or less in length this season, completing every lap except at Bristol (Tenn.) Motor Speedway in August when a mechanical issue forced the No. 10 Smithfield Ford Fusion behind the wall for repairs.

In 13 starts at the Richmond oval, Almirola has captured one top-five finish and four top-10s. He has an average Richmond finish of 16.3 with 99.9 percent of laps completed. He earned his best finish of fourth in September 2015. He has six Richmond starts in the Xfinity Series with one top-10 finish, 10 laps led and an average finish of 16.2.

Richmond marks the 25th points-paying event during which the Smithfield livery has adorned Almirola’s No. 10 Ford Fusion. Smithfield, a brand of Smithfield Foods, which is based approximately five hours northeast of SHR headquarters in Smithfield, Virginia, is in its seventh season with Almirola and its first with SHR. Founded in 1936, Smithfield is a leading provider of high-quality pork products, with a vast product portfolio including smoked meats, hams, bacon, sausage, ribs, and a wide variety of fresh pork cuts.

In 27 Cup Series outings this year, Almirola has an average start of 17.8 and an average finish of 14.3, with one top-five finish and 11 top-10s. He’s also led 115 laps this season, already a career best. Almirola is third among the four-driver SHR contingent in the playoff point standings.

Aric Almirola: Driver of the No. 10 Smithfield Get Grilling Ford Fusion for Stewart-Haas Racing:

This is your first year at Stewart-Haas Racing and you’ve also been paired with a new crew chief Johnny Klausmeier. How has it been working with him?
“It’s been good. We’ve been showing up with fast racecars every week and Johnny has really taken control and is doing a great job leading the 10 team. He has a really calm demeanor about him. We’re in a pretty stressful, high-intensity situation in the playoffs. It’s been nice to have him as a leader. It’s been nice to have that calm voice, and he’s very calculated and detail oriented. All of those things have made him great to work with.”

You’re 12 points to the good in the standings, but you finished 17th at Richmond earlier this season. How do you feel going into this weekend?
“We actually had a really fast Smithfield Ford Fusion at Richmond earlier this season. In the first stage, we drove from 25th all of the way up to second and almost won the stage. The next stage, we finished third, and then some strategy, pit-stop cycles and things like that didn’t play in our favor. Other than that, we had a top-five car in the first two stages and a top-10 car in the final stage. If we can find that speed we had early in the race back in April, and can carry that throughout the whole race this weekend, we’ll be fine. I feel good about this weekend. Of all places, going to Richmond, I feel good about having a shot at going for the win.”