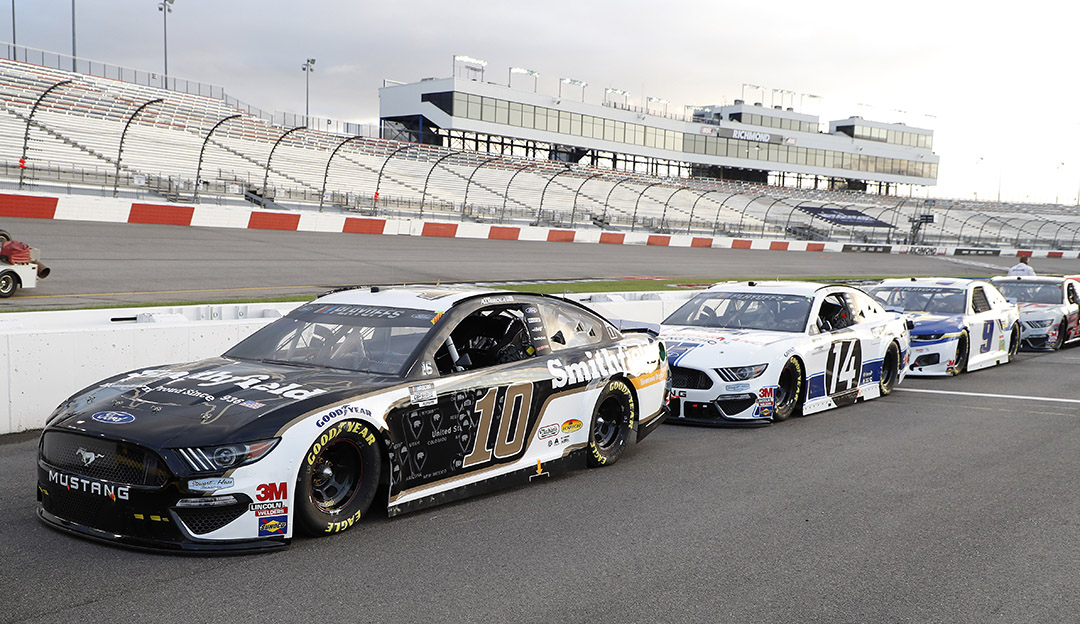 Stage 1 Recap (Laps 1-80):
● Aric Almirola started 10th and finished 15th.
● The Smithfield Ford driver pitted on lap 33 under the competition caution for an air pressure adjustment, four tires and fuel. He reported that he was struggling to run in the middle of the turns.
● Almirola lost a few positions on the restart. He was in 17th on lap 60 after noting that the car continued to handle too tight in the middle of the turns.
● As the laps in Stage 1 wound down, Almirola reported that the middle of the turns continued to be a problem.
● He finished Stage 1 in 15th place. The team made air pressure and chassis adjustments, changed four tires and added fuel during the caution.

Stage 2 Recap (Laps 81-235):
● Almirola started 11th and finished eighth and earned three bonus points.
● Almirola patiently worked his way back among the top-10 early in Stage 2.
● The balance on the Smithfield Ford continued to be a challenge, but Almirola was able to move through the field. He was in seventh place by lap 140.
● Almirola made a green-flag pit stop on lap 153. The team changed four tires and added fuel.
● Despite persistent handling issues, Almirola maintained a presence in the top-10 throughout Stage 2, finishing eighth.
● At the conclusion of Stage 2 Almirola reported that he really needed the Smithfield Ford to turn better. The team made both chassis and air pressure adjustments, changed four tires and added fuel.

Final Stage Recap (Laps 236-400):
● Almirola started seventh and finished eighth.
● After reporting that the balance on the Smithfield Ford was still off, Almirola made a green-flag pit stop on lap 293 for tires, fuel and a series of adjustments.
● The tight-handling condition continued to be a problem. Almirola made what the team hoped to be its last stop of the night on lap 342 under green-flag conditions. The team changed four tires and added fuel.
● Almirola was in eighth place on lap 351 when he reported that the Smithfield Ford’s handling had shifted to the loose side.
● While handling issues plagued the No. 10 team throughout the final stage, Almirola was able to muscle his way to an eighth-place finish.

Notes:
● Almirola earned his 16th top-10 of the season and his sixth top-10 in 17 career NASCAR Cup Series starts at Richmond.
● This was Almirola’s second straight top-10. He finished ninth in the series’ previous race at Darlington.
● Almirola finished eighth in Stage 2 to earn three bonus points.
● Brad Keselowski won the Federated Auto Parts 400 to score his 34th career NASCAR Cup Series victory, his fourth of the season and his second at Richmond. His margin of victory over second-place Martin Truex Jr., was 1.568 seconds.
● This was Ford’s series-leading 16th NASCAR Cup Series win of the season and its 702nd all-time Cup Series victory.
● This was Ford’s 33rd NASCAR Cup Series victory at Richmond. Ford’s previous win at the track came with Joey Logano in April 2017. Its first Richmond win came on May 5, 1957 with Paul Goldsmith.
● There were three caution periods for a total of 21 laps.
● Only 11 of the 38 drivers in the race finished on the lead lap.
● Kevin Harvick remains the championship leader after Richmond with a 21-point advantage over second-place Denny Hamlin.

Aric Almirola, driver of the No. 10 Smithfield Ford Mustang for Stewart-Haas Racing:
“The Smithfield Ford was a handful all night. Everyone kept in it and kept working on it. We got a top-10 finish and it was a good point day. That’s the big thing. Now we need to go to Bristol next weekend, run well and get ourselves into the next round.”

Next Up:
The next event on the NASCAR Cup Series schedule is the Bass Pro Shops Night Race on Saturday, Sept. 19 at Bristol (Tenn.) Motor Speedway. It is the third race of the 10-race playoffs and the last race in the Round of 16. It starts at 7:30 p.m. EDT with live coverage provided by NBCSN and SiriusXM NASCAR Radio.