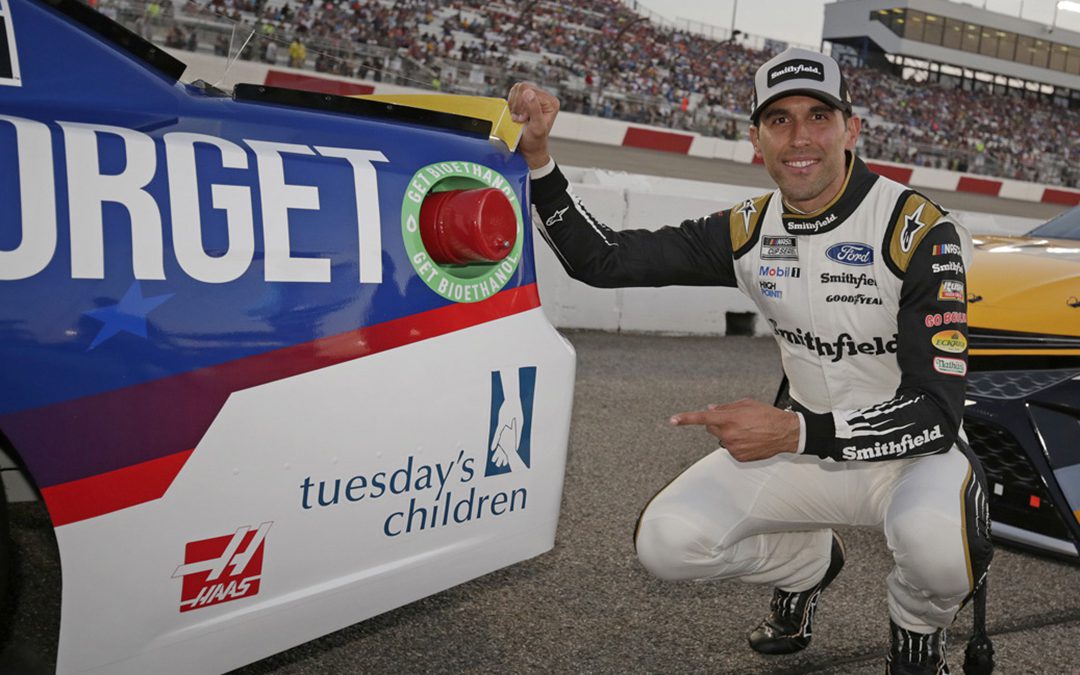 Stage 1 Recap (Laps 1-80):
● Aric Almirola started ninth and finished 10th, earning one bonus point.
● Almirola said his Smithfield Ford turned good in the middle of the turns but struggled with drive off the turns.
● The No. 10 team radioed that Almirola was the second fastest car on track before the competition was called.
● He pitted for four tires, fuel and air pressure adjustments to restart ninth.
● The Smithfield driver raced to eighth before a caution was called on lap 42.
● Almirola restarted seventh. His drive off of the corners continued to affect his speed, causing him to fall outside of the top-10.
● Almirola raced back inside the top-10 before the stage ended.
● He pitted under caution for four fresh tires, fuel and chassis adjustments and gained two spots on pit road.

Final Stage Recap (Laps 236-400):
● Almirola started seventh and finished 14th.
● The Smithfield driver was scored ninth after a caution on lap 251.
● Almirola continued to battle handling issues throughout the run. He pitted under green on lap 295 for four fresh tires, fuel and adjustments.
● As Almirola exited pit road he reported a loose wheel and was forced to pit again, putting him a lap down in 20th.
● Almirola drove to 16th before pitting under green with 54 laps to go.
● He drove the No. 10 Ford to 14th by lap 361 and held his position inside the top-15 to the checkered flag.

Notes:
● Almirola earned his eighth top-15 of the season and his eighth top-15 in 19 career starts at Richmond.
● This was Almirola’s third straight top-15 at Richmond. He finished sixth in the series’ prior visit to the track in April and eighth last September.
● Martin Truex Jr. won the Federated Auto Parts 400 Salute to First Responders to score his 31st career NASCAR Cup Series victory, his fourth of the season and his third at Richmond. His margin over second-place Denny Hamlin was 1.417 seconds.
● There were five caution periods for a total of 30 laps.
● Only nine of the 37 drivers in the Federated Auto Parts 400 Salute to First Responders finished on the lead lap.

Aric Almirola, driver of the No. 10 Smithfield/Tuesday’s Children Ford Mustang for Stewart-Haas Racing:

“We didn’t have a race-winning car, but I thought we could have run fifth to eighth, so I’m a little frustrated but it’s a team sport and we’ll go to Bristol and keep fighting.I think we’re competitive. We’re in the hunt. We had a loose lugnut and I had to pit again under green, and then got us behind. I don’t know where we finished. I think we finished 14th instead of sixth or seventh, which is about where we were running, so frustrating that we gave up those points. This situation we can’t really give up any points. It would have been a lot nicer to go to Bristol plus 12 instead of plus three or four, but it is what it is. It’s no big deal. We’ve got to put our head down and go race. It’s the same situation. We’ve just got to go racing and score as many points as we can. You just hate to give up six, seven, eight points.”

Playoff Standings (with one race to go before Round of 12):

Next Up:
The next event on the NASCAR Cup Series schedule is the Bass Pro Shops Night Race on Saturday, Sept. 18, at Bristol (Tenn.) Motor Speedway. It is the third race of the 10-race playoffs and the last race in the Round of 16. It starts at 7:30 p.m. EDT with live coverage provided by NBCSN and SiriusXM NASCAR Radio.