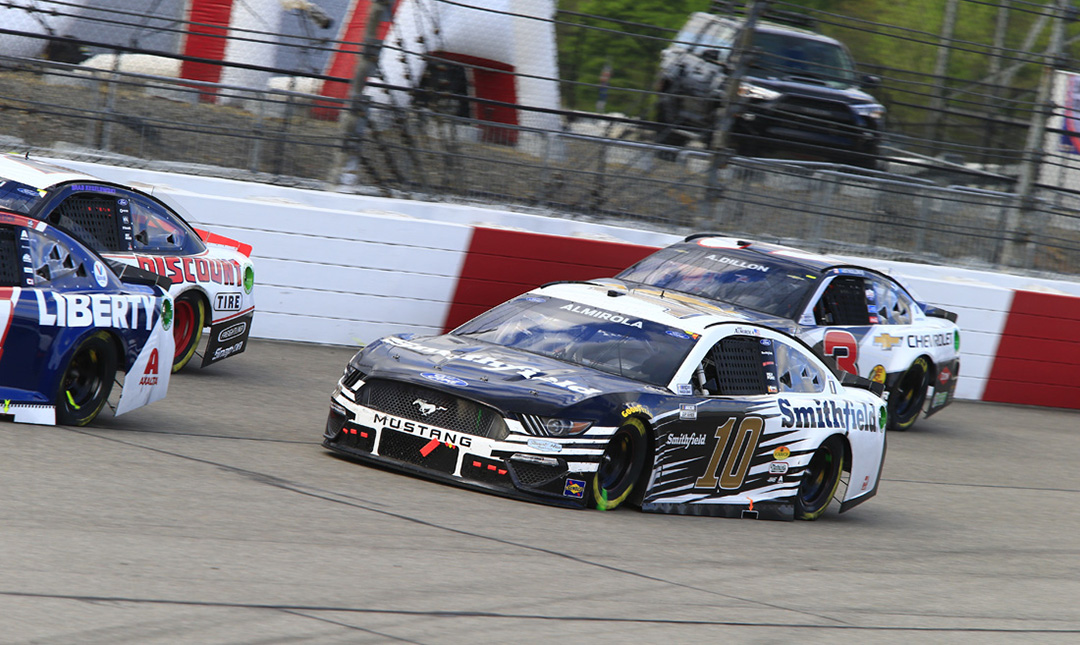 Stage 1 Recap (Laps 1-80):
● Aric Almirola started 22nd and finished 12th.
● Almirola drove to 19th before the competition caution. He reported loose-handling conditions during the 30-lap run.
● The No. 10 Smithfield Ford team pitted for four tires, fuel and air pressure and chassis adjustments.
● Almirola continued to radio difficult handling conditions, but he impressively drove to 12th place before the stage ended.
● He pitted at the end of the stage for four fresh tires, fuel and chassis adjustments.

Stage 2 Recap (Laps 81-235):
● Almirola started 12th and finished 10th, collecting one bonus point.
● Almirola cracked the top-10 on lap 117.
● He pitted for four fresh tires and fuel on lap 137 from 11th place.
● The caution was called shortly after, putting Almirola and the majority of the field a lap down. He opted to wave around during the caution period and restarted 15th behind lapped traffic.
● Almirola pitted under green from 15th on lap 186 and drove back to the top-10 before the stage concluded.
● He pitted at the end of the stage for multiple adjustments.

Final Stage Recap (Laps 236-400):
● Almirola started 10th and finished sixth.
● The Smithfield Ford driver raced his way to sixth place before pitting under green on lap 294 for four fresh tires and fuel.
● He came off pit road in ninth place and drove to seventh by lap 306.
● Almirola pitted under green from seventh place with 58 laps to go. He came off pit road in seventh.
● Almirola advanced to sixth place with 33 laps to go and passed teammate Kevin Harvick with 23 to go.
● On lap 381, the caution was called with Almirola running fifth.
● The Smithfield Ford driver pitted for four tires, fuel and air pressure adjustments. He came off pit road in fifth place.
● Almirola drove to fourth during the restart. He battled the No. 20 car for multiple laps until losing grip and crossing the finish line sixth.

Notes:
● Almirola earned his first top-10 of the season and his seventh top-10 in 18 career NASCAR Cup Series starts at Richmond.
● This was Almirola’s second straight top-10 at Richmond. He finished eighth in the series’ prior visit to the track last September.
● Alex Bowman won the Richmond 400 to score his third career NASCAR Cup Series victory, his first of the season and his first at Richmond. His margin over second-place Denny Hamlin was .381 of a second.
● There were five caution periods for a total of 39 laps.
● Only 14 of the 38 drivers in the Richmond 400 finished on the lead lap.
● Hamlin remains the championship leader after Richmond with an 81-point advantage over second-place Martin Truex Jr.

Aric Almirola, driver of the No. 10 Smithfield Ford Mustang for Stewart-Haas Racing:
“Man, I really battled for fifth there at the end but burnt up my tires on the outside in the process. Finally, a solid day for our Smithfield team. Everyone did their part, and we were mistake-free today. We showed what this team is capable of today. Let’s fire it up and keep it rolling.”

Next Up:
The next event on the NASCAR Cup Series schedule is the GEICO 500 on Sunday, April 25, at Talladega (Ala.) Superspeedway. The race begins at 2 p.m. EDT with live coverage provided by FOX and SiriusXM NASCAR Radio.