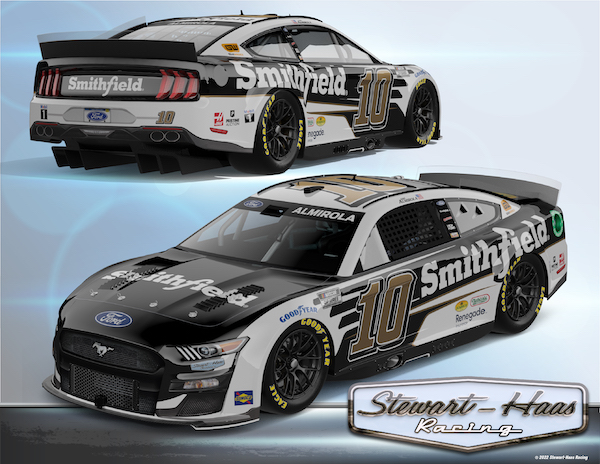 ● History at Richmond: In 20 starts, Almirola has earned seven top-10 finishes, two top-fives, and has led one lap on the .75-mile Richmond (Va.) Raceway oval. In his last seven qualifying attempts there, he has started outside the top-10 just twice with a best start of sixth in the September 2016 race.

● Almirola has shown speed at shorter tracks this season. He qualified second at Martinsville (Va.) Speedway and secured a top-10 finish. Almirola qualified fifth at Phoenix Raceway in March and had a fast Smithfield Ford. He qualified 10th in his last visit to Richmond this past April, but an ill-timed caution put him two laps down, ultimately finishing 21st.

● Before he sets his sights on his on-track performance this weekend, Almirola will spend Friday visiting the employees of Smithfield facilities in Suffolk and Smithfield, Virginia. The day will be filled with meet-and-greets, question-and-answer sessions, pit stop demonstrations, autographs, and more. On Sunday, Almirola will visit the Smithfield display in the fan midway, which will host the Smithfield production Ford Mustang that fans can enter to win at Smithfield.com, through the “Finish in Style” program.

● Driver Points: Almirola arrives at Richmond 18th in the driver standings with 518 points, 329 out of first.

● Playoff Points: The No. 10 Ford driver sits 19th in the playoff standings, 210 points behind the top-16 cut line. With just three races remaining in the regular season, Almirola and the No. 10 team’s only path to the playoffs is by race win.

● Richmond is a hometown race for Smithfield Foods, whose headquarters are located just 80 miles southeast of the track. Smithfield Foods is an American food company with agricultural roots and a global reach. Its 63,000 team members are dedicated to producing “Good food. Responsibly.®” Smithfield is one of the world’s leading vertically integrated protein companies. The company has pioneered sustainability standards for more than two decades, including its industry-leading commitments to become carbon negative in U.S. company-owned operations and reduce GHG emissions 30 percent across its entire U.S. value chain by 2030. Smithfield believes in the power of protein to end food insecurity and has donated hundreds of millions of food servings to local communities. Smithfield boasts a portfolio of high-quality iconic brands, such as Smithfield®, Eckrich® and Nathan’s Famous®, among many others. For more information, visit www.SmithfieldFoods.com, and connect on Facebook, Twitter, LinkedIn and Instagram.

You have shown more speed recently but have unfortunately been caught in early race incidents. What is it going to take to secure the win you need to make the playoff field?

“First, you have to bring a fast car and put yourself in position to run up front. The rest is just executing and being perfect. This level of racing is so competitive and you have to do everything right. I have to be laser-focused, the pit crew has to be laser-focused, and Drew (Blickensderfer, crew chief) does, too. When everything falls into place, you have a chance at winning, but you’re still at the mercy of the guys around you. That is what has been so tough the last few weeks. You can have the fastest car, but if you get caught in a bad spot or make one small mistake, your entire chance is over. This NextGen car has made it even more competitive with all of the different winners, so hopefully it’s our weekend to have that opportunity for a clutch moment like New Hampshire last year.”

You have made the playoffs every year at Stewart-Haas Racing in clutch fashion. To what do you attribute that success?

“Never giving up. Always overcoming adversity and going to each weekend with a short-term memory from the weekend before. In this sport, most guys only win one race a year, which means you’re technically losing every other race that season, so you have to be positive or the mental side of things will eat you up.”

“I would say Richmond is one of the most challenging racetracks we go to for managing your tires throughout the run. The first 10, 15 or 20 laps of the run can make you feel like Superman roaring through the field, but you will pay a major penalty for that by lap 40. It makes it fun because, when we show up at Richmond, it really is about managing tire fall-off and making sure your car stays consistent throughout the run as the tires fall off.”

“Richmond is an awesome track to race at. It’s also pretty close to Smithfield, Virginia, so it’s a hometown race for Smithfield. We’ll be visiting both of their offices this year to show our appreciation for all of their years of support. It’s just a lot of fun to go there and race and put a show on for them and the Richmond race fans.”