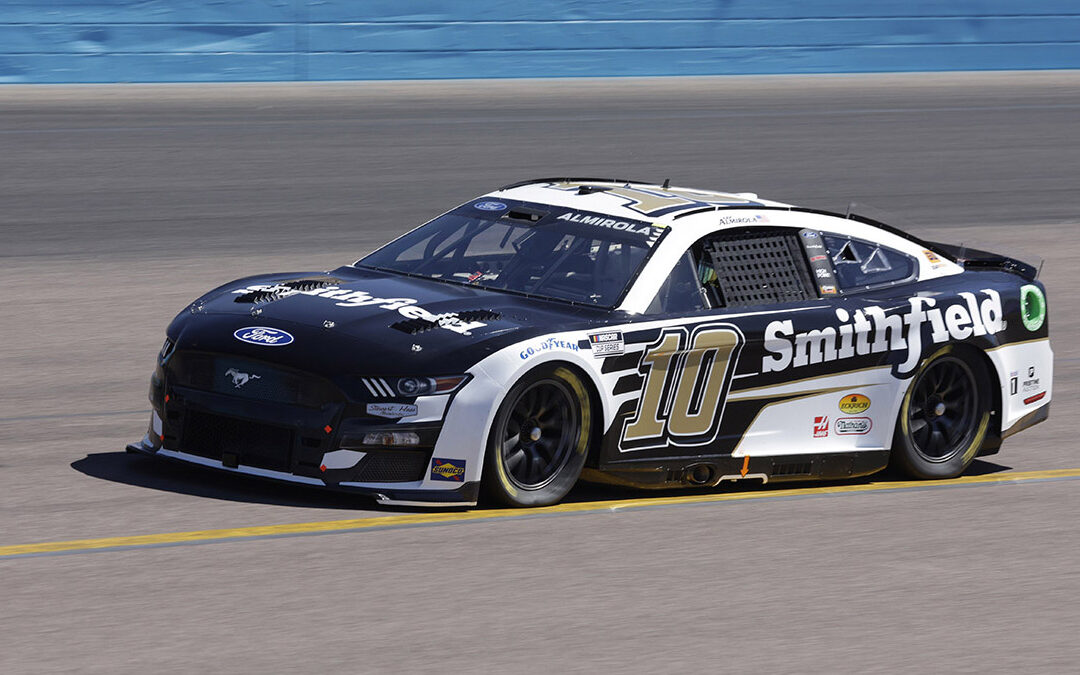 ● Aric Almirola is the only driver in the NASCAR Cup Series who has finished on the lead lap in every race this season.
● Almirola’s average finish of 11.7 through the first six races places him second among all drivers this season. It’s his best average finish through six races in 10 fulltime Cup Series seasons.
● Almirola is the only NASCAR Cup Series driver to finish in the top-10 in this year’s opening three races. He finished fifth in the season-opening Daytona 500 at Daytona (Fla.) International Speedway, sixth at Auto Club Speedway in Fontana, California, and sixth at Las Vegas Motor Speedway. Almirola’s top-10 streak ended with a 12th-place finish at Phoenix Raceway despite running inside the top-10 throughout the race.
● History at Richmond: In 19 starts, Almirola has earned seven top-10 finishes, two top-fives, and has led one lap on the .75-mile Richmond oval.
● Last weekend at Circuit of the Americas in Austin, Texas, Almirola earned six stage points and finished 19th.
● Points: Almirola arrives at Richmond eighth in the driver standings with 168 points, 40 out of first.
● Almirola’s career: In 394 NASCAR Cup Series starts, Almirola has earned three wins, 27 top-five finishes, 87 top-10s, three poles, and has led 899 laps.
● Richmond is a home race for Smithfield Foods, whose headquarters are located just 80 miles southeast of the track. Headquartered in Smithfield, Virginia, since 1936, Smithfield Foods, Inc., is an American food company with agricultural roots and a global reach. Its 63,000 team members are dedicated to producing “Good food. Responsibly.®” Smithfield is one of the world’s leading vertically integrated protein companies. The company has pioneered sustainability standards for more than two decades, including its industry-leading commitments to become carbon negative in U.S. company-owned operations and reduce GHG emissions 30 percent across its entire U.S. value chain by 2030. Smithfield believes in the power of protein to end food insecurity and has donated hundreds of millions of food servings to local communities. Smithfield boasts a portfolio of high-quality iconic brands, such as Smithfield®, Eckrich® and Nathan’s Famous®, among many others. For more information, visit www.SmithfieldFoods.com, and connect on Facebook, Twitter, LinkedIn and Instagram.
● One More Time: On Jan. 10, Almirola released a video on his YouTube channel announcing his retirement from fulltime NASCAR Cup Series racing after the 2022 season to spend more time with his family. This year marks Almirola’s 11th fulltime Cup Series season. The official press release can be viewed here.
● Beyond the 10 YouTube Series: In 2022, Almirola is once again sharing his life beyond the No. 10 Smithfield Ford with season three of his award-winning YouTube series. Fans and media can subscribe on YouTube to see Almirola’s personality on and off the track. Episodes have already featured life as a dad, a husband and an athlete, and it gives fans a unique perspective on what goes on in the life of a professional NASCAR driver. Fans can also follow Almirola’s social media channels: @Aric_Almirola on Twitter and Instagram, and @AricAlmirola on Facebook.

What can you say about your team’s success and consistency this year?

“The main thing is that this 10 team does not give up. Every race this season has had its ups and downs and we have made the most out of the day we are given. We’re the only team in the series right now that has stayed on the lead lap and it shows. Last weekend, we cut a tire and went back to 34th with six laps to go – then we had another tire issue. We pitted twice from 34th and still ended up with a top-20. No matter the circumstance, we race for one more spot until the checkered flag waves and I think our position in the points has shown that. Our time will come.”

This weekend is Richmond and next weekend is Martinsville, and you have had success at both and proven to show consistency at shorter tracks. How confident are you that you can secure your spot in the playoffs with a win at either of those tracks?

“With the way things are going, I’ve never had more confidence. This new car levels the playing field and puts it on the drivers to perform. We always run well at Richmond and Martinsville – even when we don’t have the best setup, so I’m really looking forward to it. Unlike last year, we’re in a great points position and we get to qualify, so we’re not backed into a points hole and can race without as much pressure as we did last year. When I got out of the car on Sunday at COTA, Drew (Blickensderfer) said, ‘Next weekend is going to be a good one,’ so the whole team is confident heading into the weekend.”

“I would say Richmond is one of the most challenging racetracks we go to for managing your tires throughout the run. The first 10, 15 or 20 laps of the run can make you feel like Superman roaring through the field, but you will pay a major penalty for that by lap 40. It makes it fun because, when we show up at Richmond, it really is about managing tire fall-off and making sure your car stays consistent throughout the run as the tires fall off.”

“Richmond is an awesome track to race at. It’s also pretty close to Smithfield, Virginia, so it’s a hometown race for Smithfield. It’s just a lot of fun to go there and race. In the fall, it’s racing at its finest, beating and banging. And the track has very little grip and the tires wear out, so it’s a really fun racetrack.”