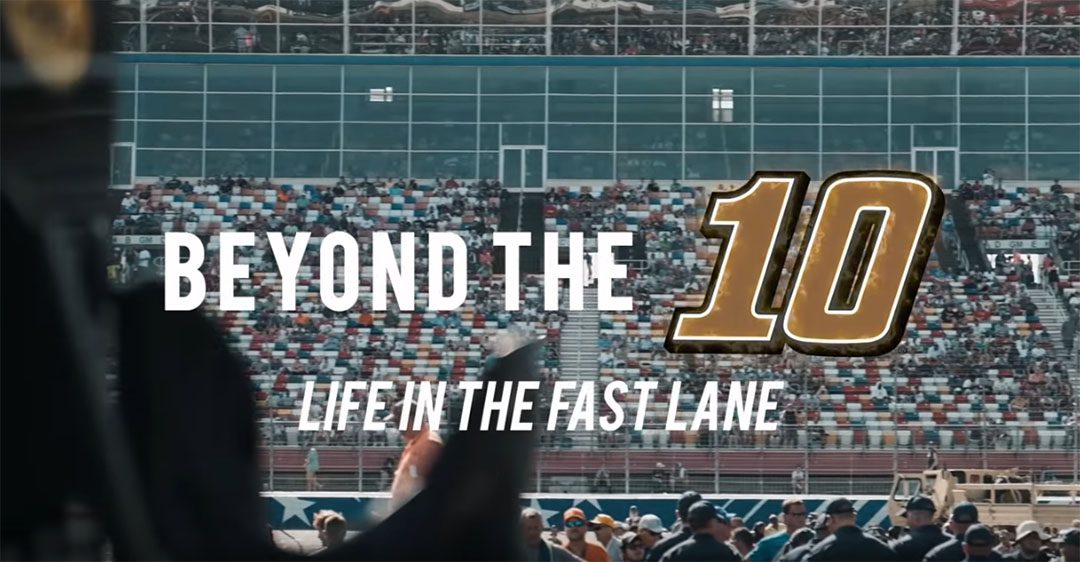 KANNAPOLIS, N.C. (April 11, 2020) – It’s been four weeks since NASCAR and other sports were forced to postpone their respective events amid the COVID-19 outbreak. It’s made binge watching the new pastime of this brave new world.

While iRacing has done an impressive job of simulating NASCAR action with the eNASCAR iRacing Pro Invitational Series, the ability to go beyond the racing and behind the scenes of the NASCAR Cup Series has seemingly been halted.

Or has it? Aric Almirola, driver of the No. 10 Smithfield Ford Mustang for Stewart-Haas Racing, has a solution.

His free YouTube docuseries, Beyond the 10, began nearly a year ago and has since grown to include 17 episodes, five of which were created before the 2020 season was forced into hiatus. Fans have already watched more than 5,400 hours of Beyond the 10 and have given it a 97.8 percent approval rating.

“We started this docuseries because we felt like there was much more for fans to see than just drivers in firesuits racing cars,” Almirola said. “It’s been fun to show fans that I’m really no different from them. I’m a dad and a husband with a great family. I have flaws and I make mistakes, but I enjoy life. I have to get up every day and work hard for what I have, just like everyone else. At the end of the day, I want to be recognized for the human I am outside of the racecar.”

Early episodes showcase his 2019 season, beginning with the Coca-Cola 600 at Charlotte (N.C.) Motor Speedway. Episodes progress into previewing his workout regimen, his routine at the track while awaiting practice, visiting LEGOLAND Resort and the beach with his family, dancing like a dad with his son Alex and daughter Abby, performing burnouts on the Las Vegas strip to help kick off the NASCAR Playoffs, and even throwing a bowling ball out of his No. 10 Smithfield Ford Mustang at 140 mph with the No. 1 bowler in the world, Jason Belmonte, to secure the record for the World’s Fastest Strike.

For the second season of Beyond the 10, fans get behind-the-scenes access of how Almirola prepares physically and mentally for the start of the year. Viewers can also tag along with Almirola to Miami where in the week leading up to the Super Bowl, he spent time on radio row doing countless interviews to promote the Daytona 500, all while mingling with NFL legends. Cameras followed Almirola throughout Daytona Speedweeks, with Beyond the 10 featuring exclusive content in the moments leading up to the Great American Race. The latest and most popular episode is an MTV Cribs-style tour of the No. 10 Smithfield hauler.

If you have one hour, 54 minutes and 24 seconds in your day, which you likely do with the government’s mandate to stay at home, binge-watching Beyond the 10 can help fill the void of our silenced sports scene.

“This is the perfect way to kill some time, whether you’re working from home, studying from home, or are an essential employee who has had a long day and needs a way to unwind,” Almirola said.

Future Beyond the 10 episodes will feature how Almirola balances his kid’s school, competition obligations and staying fit, and also how he came to marry his former crew chief’s daughter.

“It took a lot for me to put myself out there,” Almirola added. “So, I hope everyone enjoys and subscribes.”

How to binge watch Beyond the 10:
· Go to https://www.youtube.com/aricalmirola
· Click subscribe
· Go to the “playlist” tab
· Click “Beyond the 10” and press play
· Watch on TV or screen mirror your device for a theater-styled experience