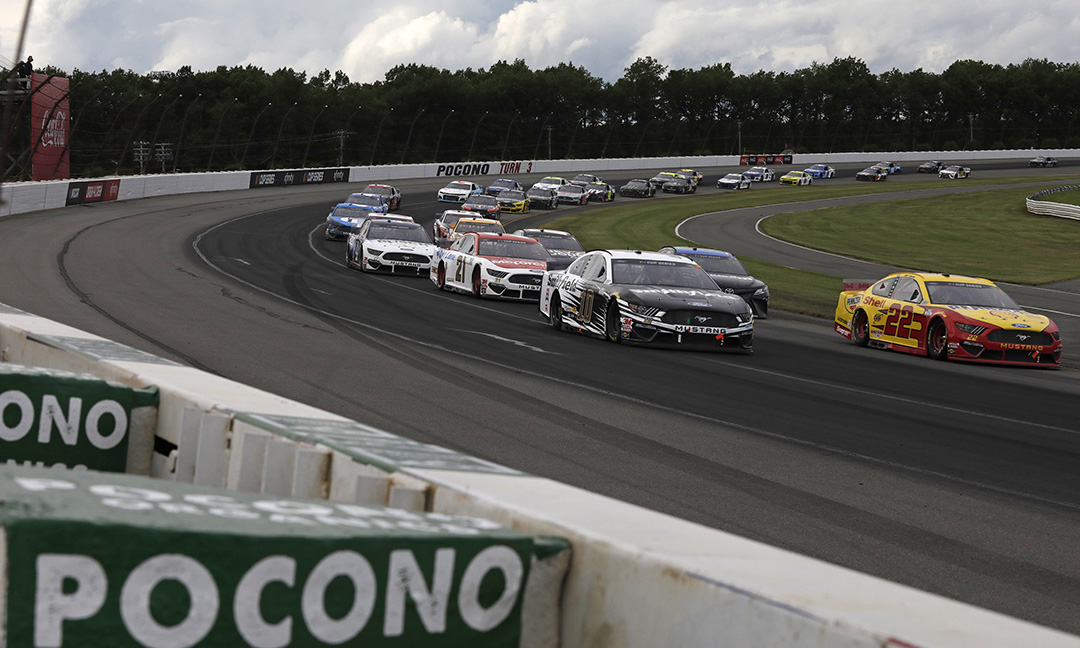 Stage 1 Recap (Laps 1-25):
● Aric Almirola started first and finished second to earn nine bonus points.
● Almirola held the lead before the competition caution was waved on lap 12. He opted not to pit to hold the lead.
● The Smithfield Ford driver said he was tighter in the middle of the turns and fell one position to the No. 22 car on lap 21.
● Almirola stayed out of the pits at the end of the stage.

Stage 2 Recap (Laps 26-77):
● Almirola started second and finished first to earn 10 bonus points and one playoff point.
● The No. 10 Smithfield driver took the lead on the restart of Stage 2.
● Almirola pitted on lap 45 under green-flag conditions for four tires, fuel and adjustments. He came off pit road 23rd.
● He stayed out of the pits under caution on lap 66 to hold the lead.
● Once pit stops cycled through, Almirola was scored in first.
● After another caution on lap 73, Almirola restarted first and held the lead to earn his first stage win of the year.
● He opted not to pit his Smithfield Ford at the end of the stage.

Final Stage Recap (Laps 78-130):
● Almirola started first and finished third.
● Almirola held the lead to start the final stage.
● The No. 10 Ford driver pitted from the lead under green on lap 92 for four tires, fuel and air pressure adjustments.
● Once green-flag pit stops cycled through, Almirola was scored third.
● He held his position before the checkered flag waved and scored his third top-five of the season.

“You have a lot of opportunity with this doubleheader at Pocono to score a lot of points and that’s what we did today. Our Smithfield Ford Mustang was really fast. I’m so proud of ‘Buga’ and all of the people back at the shop working hard. I felt like we were right there with the No. 4 when we were on older tires and clean air. We’re trying to keep this program going and we’ve got a lot of momentum. Three top-fives in a row. Really proud of my race team.”

Notes:
● Almirola earned his third top-five and sixth top-10 of the season, and his first top-five and third top-10 in 16 career NASCAR Cup Series starts at Pocono.
● Almirola’s third-place result bettered his previous best finish at Pocono – seventh, earned in June 2018.
● Almirola led three times for a race-high 61 laps. Prior to today’s race, Almirola had led just two laps at Pocono.
● This was Almirola’s second straight top-three and his third straight top-five. He finished third in the series’ last race at Talladega.
● This was Almirola’s third straight top-12 at Pocono. He finished 12th in the series’ previous visit to the track last July.
● Since joining SHR in 2018, Almirola has only finished outside the top-12 once at Pocono.
● Kevin Harvick won Saturday’s Pocono Organics 325 for his third victory of the season and his first in 39 career NASCAR Cup Series starts at Pocono. His margin of victory over second-place Denny Hamlin was .761 of a second.
● There were six caution periods for a total of 21 laps.
● Twenty-one of the 40 drivers in the race finished on the lead lap.
● Harvick remains the championship leader after Pocono with a 29-point advantage over second-place Ryan Blaney.

Next Up:
The second event of the NASCAR Cup Series doubleheader at Pocono is the Pocono 350 on Sunday, June 28. The race starts at 4 p.m. EDT with live coverage provided by FS1 and SiriusXM NASCAR Radio.