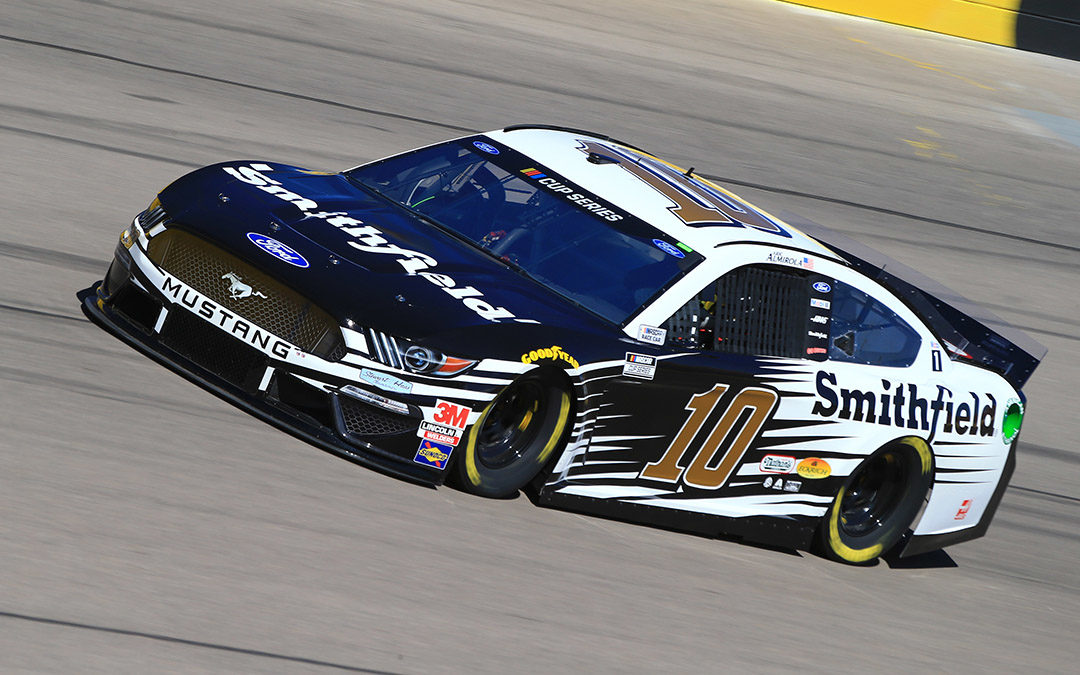 On Track for Career-Best Season

KANNAPOLIS, North Carolina (June 24, 2020) – Momentum has been a key word for Aric Almirola, driver of the No. 10 Smithfield Ford Mustang for Stewart-Haas Racing (SHR) as the team heads to Pocono (Pa.) Raceway for the first doubleheader in the modern era of the NASCAR Cup Series.

Almirola is on a string of two consecutive top-five finishes – earned at Homestead-Miami Speedway, where he finished fifth, and Talladega (Ala.) Superspeedway, where he finished third. It’s the first time in Almirola’s career that he has earned consecutive top-five finishes. The Talladega result enabled him to tie a record with Hall of Fame inductee Dale Earnhardt Jr., with his eighth consecutive top-10 at the Alabama track. In addition to his momentum, Almirola nearly clinched a playoff spot last weekend when he charged to the lead before he was clipped in the right-rear, ultimately taking the checkered flag by spinning across the finish line backwards.

“The last 50 feet, I was spinning toward the infield,” Almirola said with a laugh. “I saw that my momentum was coming next to Ryan Blaney and I saw I was about to be wheel-to-wheel with him. I honestly thought I was going to win the race. I was going about 3 or 4 mph faster at that point. I just had the smallest gap to get between the No. 47 and Blaney. It just wasn’t quite clear enough. The 47 just clipped my left-rear and spun me around. I still thought I had enough momentum that I might have actually won. While I was spinning, I was waiting for someone to tell me that we won, but unfortunately they told me third.”

This weekend, Almirola heads to the track coined “The Tricky Triangle,” where he looks to continue the momentum. The No. 10 Ford driver has an impressive resume of finishes at Pocono since joining SHR with two top-10 finishes. His best finish at the 2.5-mile triangle is seventh, earned June 3, 2018.

“I’m a big believer in momentum,” Almirola said. “Our team had a rough patch of finishes that came from a string of bad luck. We’ve always had fast cars, and now we’ve put it all together. We’ve had solid races recently and it’s put a lot of confidence in this Smithfield Ford team.”

While the No. 10 team builds on this success, they know it has a unique and challenging weekend ahead with back-to-back races at Pocono in as many days.

“Typically we have a full-length race and have a few days to recover and do it again, but now we’re going to race, try to get rehydrated, go to sleep and get up the next morning ready to go again. It’s going to be a lot more demanding, but it’s also going to be fun. As a competitor, I love to race and racing on consecutive days is a lot of fun. You always Monday-morning quarterback every race, and so you leave the race on Sunday, and in Monday’s competition meeting you say, ‘Man, if we could just do this race over again, this is what I would do.’ Now we get that opportunity. We’re going to race on Saturday and, if we have a good run, we have the opportunity to refine that performance and, if we have a bad run, you have the opportunity to change a lot of things on your car.”

His No. 10 Ford will again sport the iconic black, white and gold of partner Smithfield Foods Inc., at Pocono this weekend. Smithfield, which is sponsoring Almirola’s car at the majority of races this season, is an American food company with agricultural roots and a global reach. Its 40,000 U.S. employees are dedicated to producing “Good Food. Responsibly®,” and have made it one of the world’s leading vertically integrated protein companies.

Almirola continues to provide fans with content from his documentary series Beyond the 10, where they can get VIP, behind-the-scenes access by subscribing to his YouTube channel. Episodes showcase never-before-seen footage of Almirola at the racetrack, on family trips, and “A Day in the Life” during the week, as well as all that goes into a NASCAR Cup Series driver’s season. Click here to subscribe on YouTube and watch the latest episode.​​

Almirola arrives at Pocono 12th in the season standings with 337 points – 153 behind leader and SHR teammate Kevin Harvick.

Will the doubleheader at Pocono be easier now that you have been forced to race just three days apart under the current circumstances?

“Prior to the pandemic, the doubleheader was going to be something wildly different, but now everything is such a blur with these weekday races and it’s become the new norm for us. But running two races back to back is much different than Sunday and Wednesday. Now we have to bring the same car for these two races compared to having a setup for a Wednesday race and a new setup for a Sunday race.”

Is it tough now that you had to race on Monday at Talladega and just get four days to prepare for Pocono?

“It is a little bit of a shorter week. It’s mostly about recovery and making sure I’m hydrated. It’s going to be so warm. Being in the car for three hours at 130 degrees is going to be tough. It does hurt us to have one less day to recover and hydrate.”