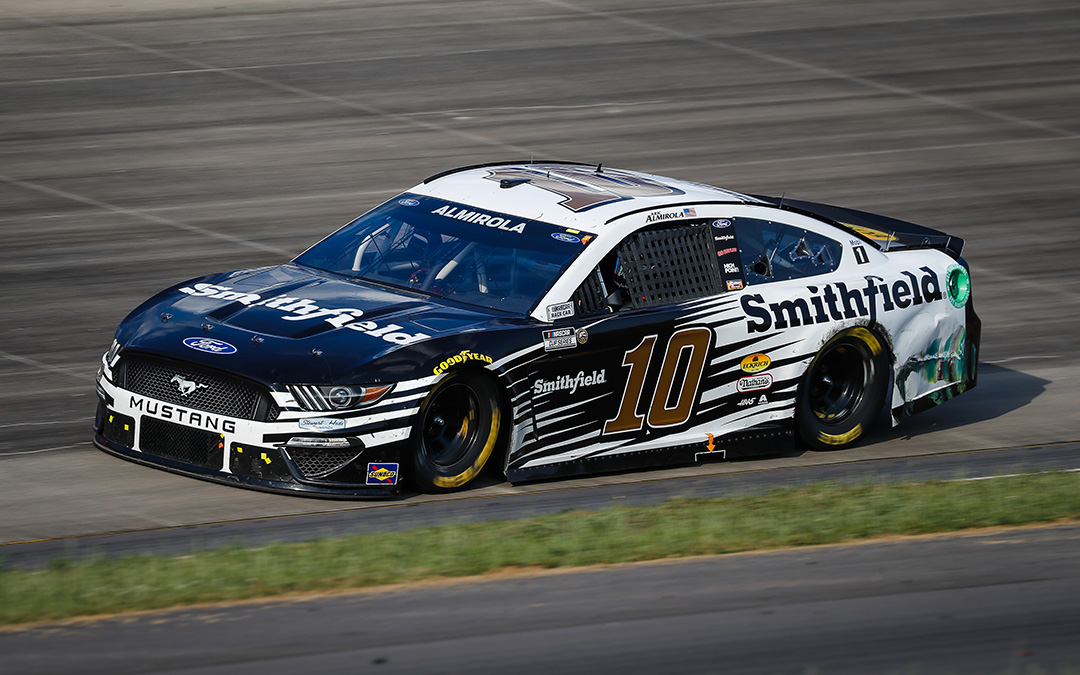 ● History at Pocono: Almirola will make his 18th start in the NASCAR Cup Series at Pocono (Pa.) Raceway this weekend. Almirola will race for his third consecutive top-five finish at Pocono. Last year, the Smithfield Ford driver earned third- and fifth-place finishes, respectively, to add to his four career top-10s at the 2.5-mile triangle.
● Almirola has one start at the “Tricky Triangle” in the NASCAR Xfinity Series in June 2016, which resulted in an 11th-place finish. He’s also made one start in the NASCAR Camping World Truck Series in July 2010 and earned a fourth-place finish.
● Crew chief Mike Bugarewicz grew up just 25 miles south of Pocono Raceway in Lehighton, Pennsylvania. In 10 starts at his home track, he’s earned an impressive four top-five finishes. Only three of his finishes were outside of the top-11.
● At last weekend’s inaugural Cup Series race at Nashville (Tenn.) Superspeedway, Almirola won the pole position and raced to a fourth-place finish. It was his best performance of 2021 and his first top-five.
● Almirola’s season has been mired by bad luck and unfortunate finishes. The Tampa, Florida, native started the year off with a win in his Duel qualifying race to start on the front row of the Daytona 500. Since then, Almirola has been dealt five DNF’s (did not finish) due to contact by other cars, cut tires, or involvement in multicar accidents. In 17 races, he has two top-10 finishes and one top-five. However, his luck seemed to turn around when he won the All-Star Open two weekends ago at Texas Motor Speedway in Fort Worth. He went on to finish eighth in the All-Star Race. With another solid result at Nashville, Almirola and the No. 10 team feel they are gaining momentum quickly.
● Almirola’s 2020 season proved successful when he earned a career-high 18 top-10 finishes, six top-fives and led 305 laps. During the season, Almirola went on a five-race streak of top-five finishes and earned nine consecutive top-10s.
● Career Stats: Almirola has career totals of two wins, two poles, 25 top-five finishes, 81 top-10s and 843 laps led in 369 NASCAR Cup Series starts.
● Smithfield Foods celebrates 10 years of partnership with Almirola this season with a special campaign called Taste Victory.As one of the most active partners in NASCAR, Smithfield plans to engage fans all year long by hosting a microsite that provides the opportunity to win when Almirola wins or finishes inside the top-10. When Almirola wins, one fan wins $10,000, and 10 fans win a gift card for each top-10 finish. The microsite also doubles as an Aric Almirola fan page and entertainment source where fans can get behind the wheel of the No. 10 Smithfield Ford with a custom racing game, and learn more about Almirola with fast facts, favorite recipes and custom content about his life on and off the track. Visit www.tastevictory.com to learn more. Thanks to Almirola’s Feb. 11 win in his Duel qualifying race for the Daytona 500, one lucky fan has already won $10,000.
● Beyond the 10 YouTube Series: In 2021, Almirola continues to share his life beyond the No. 10 Smithfield Ford with season three of his award-winning YouTube series. Fans and media can subscribe on YouTube to see Almirola’s personality on and off the track. Episodes have already featured life as a dad, a husband and an athlete, and it gives fans a unique perspective on what goes on in the life of a professional NASCAR driver. Fans can also follow Almirola’s social media channels: @Aric_Almirola on Twitter and Instagram, and @AricAlmirola on Facebook.
● After the season’s first 16 points-paying events, the Smithfield Ford team sits 28th in the championship with 240 points, 444 behind leader Denny Hamlin.

All four Stewart-Haas Racing cars finished in the top-12 at Nashville. What does this say about the organization’s progress?
“It means we’re working hard. We’ve had a lot of races where the No. 4 has been a 10th-place car and the other three of us have run 25th, it seems like, so we’ve been working hard. When you run bad, it’s 10 times as much work because you’re going down every single different avenue trying to figure out what’s going to make speed in the racecars, and when you have fast racecars it’s easy because you just massage on it and polish it and keep going to the racetrack with what you know is fast. We’ve been working so hard. I’m proud of everybody back at the shop and specifically this No. 10 Smithfield team. We’ve been off and it’s been nice to get it back and go on here in the right direction after two weeks in a row of running up front.”

What does this do for your confidence level after such a challenging first half of the season?
“It just feels good. It’s been such a tough year and it’s easy to get down on yourself and not have a lot of confidence. Confidence is something that comes with results. You can’t fake it, so it’s been nice to have two good weeks now and it certainly makes everybody have a little pep in their step and things are going in the right direction.”

What are your thoughts on bringing this momentum to Pocono? Is it a good track to bring momentum to for you?
“Basing off of last year’s performance, you almost can’t think of a better track to come to than Pocono after finding speed the last few weekends. Last year, we had such an incredible run at Pocono on back-to-back days. Pocono is historically a track I wasn’t super confident in and now I’m heading there with a completely different mindset. We don’t have practice or qualifying, so we’ll have to unload fast again but, after finishing well at Nashville, we’ll have a better starting spot than in recent weeks, which will give us an opportunity to massage the car in cleaner air and see what we’ve got. I’d say Pocono is a great place for us to bring this momentum.”