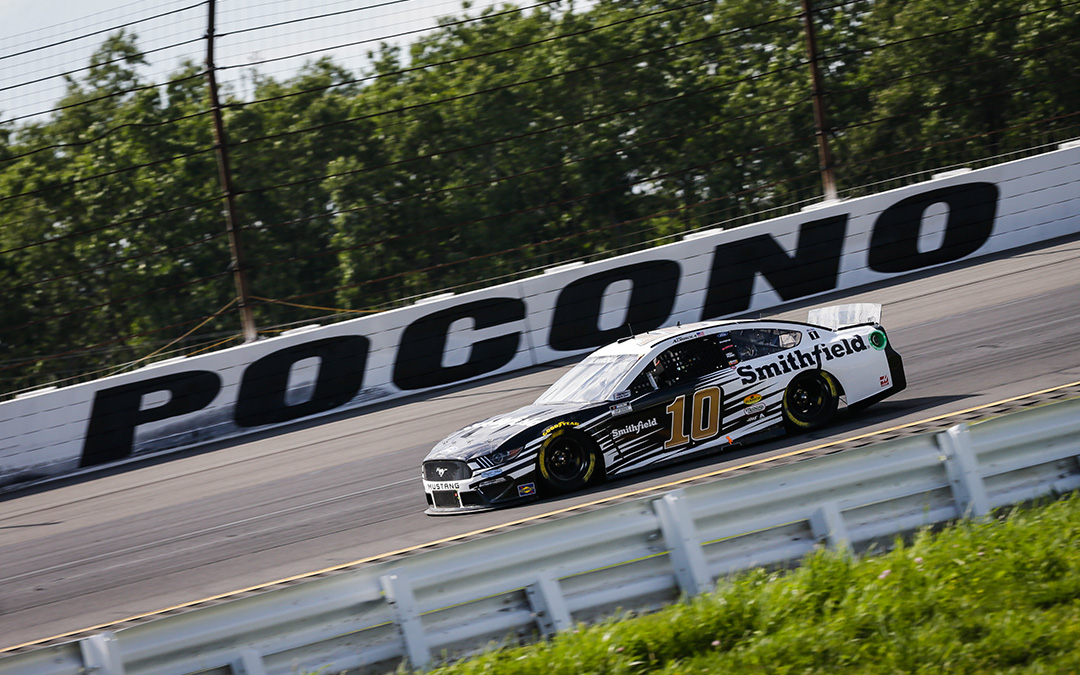 Stage 1 Recap (Laps 1-30):
● Aric Almirola started fifth and finished second, earning nine bonus points.
● The No. 10 Smithfield Ford driver was scored seventh after an early caution on lap two.
● Almirola advanced to fourth during the restart.
● He drove to third place and was promoted to second after the car in front pitted under green.
● Almirola pitted at the end of the stage for four tires, fuel and adjustments to help him rotate the exit of the turns.

Stage 2 Recap (Laps 31-85):
● Almirola started 10th and finished ninth, earning two bonus points.
● The Smithfield Ford driver gained five positions before pitting on lap 72 for four fresh tires, fuel and chassis adjustments.
● He came off pit road in ninth place.
● Almirola held his position before the stage ended, and the No. 10 team opted not to pit at the end of the stage.

Final Stage Recap (Laps 86-140):
● Almirola started sixth and finished 16th
● After a caution on lap 93, Almirola stayed out and was scored in the third position.
● Almirola avoided an accident on lap 100, but the caution was not called. He was scored eighth.
● The Smithfield driver pitted from eighth under green on lap 111 for four fresh tires, fuel and adjustments.
● Almirola was told he had enough fuel for the rest of the race and was scored 24th.
● Multiple cars in front of the No. 10 car ran out of fuel in the closing lap, providing Almirola the opportunity to gain multiple positions before the checkered flag waved.

Notes:
● Kyle Busch won the Explore the Pocono Mountains 350 to score his 59th career NASCAR Cup Series victory, his second of the season and his fourth at Pocono. His margin over second-place Kyle Larson was 8.654 seconds.
● There were four caution periods for a total of 15 laps.
● Only 22 of the 38 drivers in the Explore the Pocono Mountains 350 finished on the lead lap.
● Denny Hamlin remains the championship leader after Pocono with a four-point advantage over second-place Larson.

Aric Almirola, driver of the No. 10 Smithfield Ford Mustang for Stewart-Haas Racing:
“Buga (crew chief Mike Bugarewicz) and the No. 10 Smithfield team made steady improvements on the car all day. We thought the fuel mileage would play out better in our favor and give us a top-10. It was nice to run up front today in clean air and get some stage points. The strategy didn’t completely work out in our favor, but overall we had a decent day, and I don’t think our finish was indicative of that.”

Next Up:
The next event on the NASCAR Cup Series schedule is the Jockey Made in America 250 July 4 at Road America in Elkhart Lake, Wisconsin. The race starts at 2:30 p.m. EDT with live coverage provided by NBC and SiriusXM NASCAR Radio.