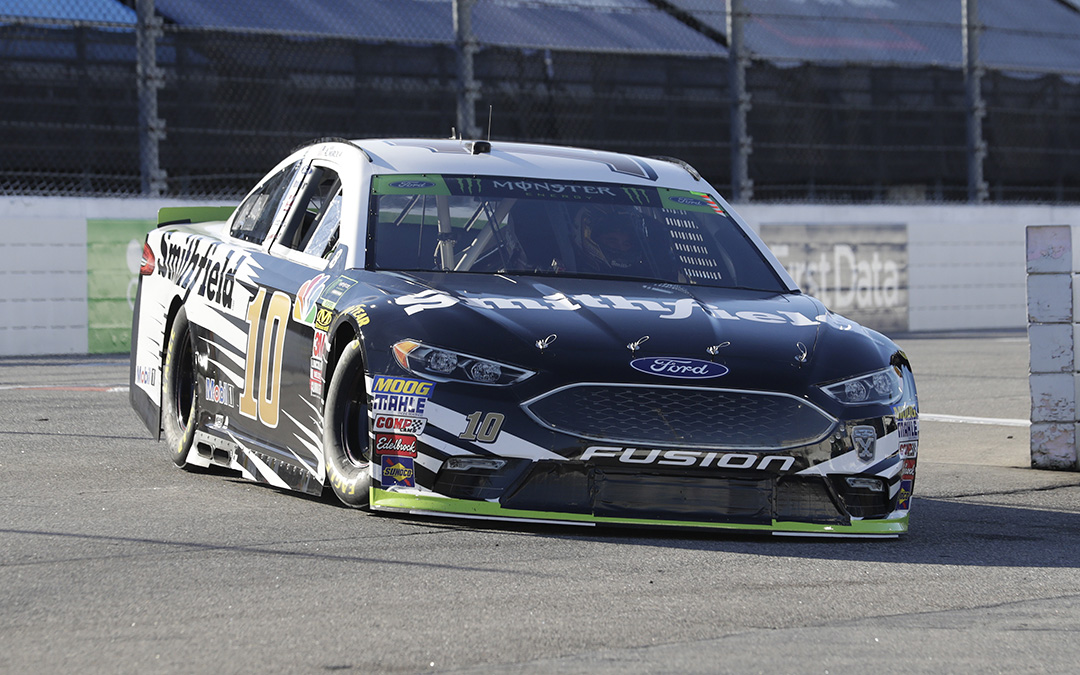 Moving on to Phoenix

KANNAPOLIS, North Carolina (Nov. 7, 2018) – Aric Almirola and the No. 10 Smithfield Ford Fusion team for Stewart-Haas Racing (SHR) make the long trek out to ISM Raceway near Phoenix for the 35th Monster Energy NASCAR Cup Series race this season. Almirola heads into the event after finishing eighth last weekend at Texas Motor Speedway in Fort Worth.

The entire four-car SHR contingent remains in the hunt for the winner-take-all Championship 4 season finale Nov. 18 at Homestead-Miami Speedway with only this weekend’s event at Phoenix left to try and qualify. The two-time championship-winning SHR organization, which makes up 50 percent of the remaining playoff field, is the first since Joe Gibbs Racing in 2016 to have all of its entries reach victory lane. Almirola currently ranks seventh in the playoff standings with 4,068 points, 35 behind the final cutoff spot for the Championship 4. The 34-year-old is in a virtual must-win situation if he is to be one of the four championship-eligible drivers at Homestead.

The Smithfield driver heads into the weekend coming off his 15th top-10 of the season behind the wheel of the No. 10 Ford Fusion. Almirola scored one of those top-10s in March on the mile oval at Phoenix, his second straight top-10 there. The Tampa native ran as high as second in this year’s spring event before finishing seventh.

Almirola is back to piloting the traditional Smithfield paint scheme this weekend but, with the holiday season is just around the corner, Smithfield continues to promote its perfectly cooked, spiral sliced ham as an ideal addition to most every kind of holiday feast to make family and friends feel special. Not only does it make holiday cooking a breeze, it provides equally flavorful leftover dishes. Fans can visit Smithfield.com/HolidayHub for information on how to make every holiday soiree a breeze, as well as foolproof tips and simple recipes that are sure to wow holiday guests with flavor-filled dishes for all the celebrations the season brings.

Over Almirola’s last 10 starts at a track less than or equal to a mile in length, he’s scored one top-five finish and four top-10s. Additionally, he’s led 67 laps and completed 98.3 percent of all laps possible while earning an average starting position of 14.1 and an average finishing position of 12.4.

On Oct. 14, the Tampa native piloted a special bacon-themed Smithfield Ford Fusion to victory lane at Talladega (Ala.) Superspeedway. The unique paint scheme coincided with Smithfield’s Bacon for Life promotion. Yes, it’s possible to win bacon for life. The sweepstakes runs until Dec. 31, and fans can enter by finding specially marked packages of Smithfield bacon in stores, then visiting Smithfield.com/BaconForLife and entering the unique code provided in the package. More than 1,000 runners-up will be awarded select bacon merchandise.

Phoenix is the 32nd points-paying event during which the Smithfield livery has adorned Almirola’s No. 10 Ford Fusion. Smithfield, a brand of Smithfield Foods, which is based approximately five hours northeast of SHR headquarters in Smithfield, Virginia, is in its seventh season with Almirola and its first with SHR. Founded in 1936, Smithfield is a leading provider of high-quality pork products, with a vast product portfolio including smoked meats, hams, bacon, sausage, ribs, and a wide variety of fresh pork cuts.

Through 34 races this season, Almirola has one win with an average start of 15.6 and an average finish of 13.1 with three top-five finishes and 15 top-10s. He’s also led 181 laps this season, already a career best with two races remaining.

What is going to make ISM Raceway difficult this time?

“I think Phoenix is going to have some new challenges with the reconfiguration of the track and the start-finish line moving. I think it will make restarts awfully entertaining for the fans, and crazy and chaotic for us. There are going to be a lot of different strategies and things, and pit road is going to be different, too. There are some unknowns, and with these unknowns come different strategies and chaos.”

With the starting line being moved at Phoenix, how will that change things?

“I think it will just make the restarts really hectic and interesting. We are not allowed to pass until we get to the start-finish line. So I think when you look at Phoenix with the start-finish line being before the dogleg, I would imagine that we will cross the start-finish line and be nine-wide going through the dog leg and then try to figure out how to get back to two-wide by the time we get to the new turn one. That is a really flat, tricky corner. Running much more than two-wide is pretty difficult through there. I am sure it will fan out and get really exciting. I think when it gets down late in the race, the restarts will be really, really intense and chaotic with guys trying to make moves in desperation and trying to make that final round of four. You can run two-wide through the old (turns) three and four, the new one and two I guess it will be. You can run two-wide pretty comfortably through there. I think there is potential for us to be four-, five-, six-wide going through that dogleg. We have seen that when it was just the back straightaway, so now going through the gears will be pretty crazy.”

Pit stops have become more important. How much attention to detail is being paid to them?

“Pit stops are important, but everything is important. Especially this part of the season when you’re trying to go for a championship. No stone can be left unturned. The car has to be fast, the driver has to do his part, the pit crew has to be perfect, everything has to come together and you have to be perfect to win these races and to win a championship. That’s what everybody strives for all year long, but really, when we get to this part of the season it’s a must.”

Have you had a chance to talk with Joey (Logano) about Texas?

“Joey and I talked. We talked on the phone (Monday). I think we both know where each of us stands and I feel good about it. I know a lot of people are confused at why I was upset when you look at the replay but the reality is that, as racecar drivers, we both know the situation that we were in, and he knows kind of where my head was at and what I was thinking. I know where his head was at and what he was thinking, and we’ll move on. We’ll go from there.”

Did you and Joey kind of agree to disagree, or are you good?

“We’re good. I think when you look back at it, Texas is just a challenging racetrack to run two-wide at. The tire is extremely hard that Goodyear brings there because of the repave. The track is extremely wide, but the groove is very narrow, and so it’s really hard to run side by side. When you do run side by side, if you’re wheel to wheel and the cars are perfectly even with each other, the car on the inside is extremely vulnerable and it’s really hard to drive your car. You saw it in the Xfinity race, you see it in all the restarts in the Cup race – that car on the inside just gets incredibly loose. So I expected and I thought one thing and that didn’t end up being the case. I was hoping he’d cut me a break, to be quite honest, and that didn’t happen to be the case. I feel like if we go to Homestead and, for whatever reason I wasn’t in the championship, that he would expect the same out of me. He would expect me to cut him a break if we restarted with 30 laps to go and he was third and I was fourth, I feel like he would expect me to cut him a break and let him go race for a championship, and that’s kind of what I was hoping for. Whether that was wrong or right of me is beside the point. I was mad and upset, and it didn’t work out for me. I went from running third to running eighth, and I didn’t think I was the best car. I didn’t think I was just going to go up there and drive around the 4 (Kevin Harvick) or the 12 (Ryan Blaney). But what I did think is, if I could just get through (turns) three and four and be third, that if something happened with the 4 and the 12, I’d be in position to capitalize on that. When I got loose under Joey, I lost that opportunity, so I was mad. These are high-pressure times and the intensity level is incredibly high and emotions run high in situations like this. I got cameras and microphones stuck in my face immediately upon getting out of the car and being upset, and everybody heard it.”

Do you let the criticism from Texas bother you?

“If I worried about what other people thought, I wouldn’t be here where I’m at today. People are always going to criticize, especially on social media. It gives people whose opinions mean absolutely nothing a platform to say whatever it is that they want. I really could care less what anybody thinks about what I said or what I did or anything about Texas or otherwise. The people’s opinions that matter the most to me are Tony Stewart, Gene Haas, all the guys on my 10 team and everybody at Stewart-Haas Racing, the people at Smithfield, Ford Motor Company – the people who directly impact my life and my career. All that outside stuff is just noise.”