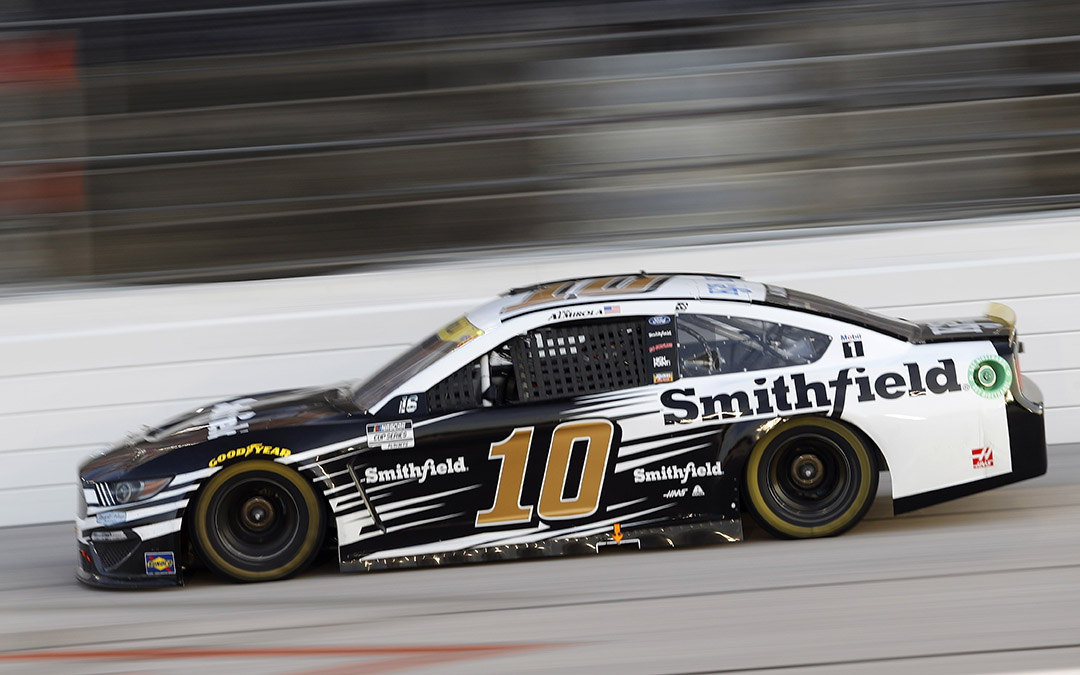 ● History at Phoenix Raceway: Phoenix is the track where Almirola has arguably been most consistent in recent years. In his last eight starts there, he has earned four top-10 finishes – two of those being top-fours. He’s also led 33 laps at the mile oval.
● Last weekend at Martinsville, Almirola ran as high as fourth place and remained in and around the top-five for the majority of the race before ultimately finishing sixth.
● Phoenix marks the final race of the 2021 season. Almirola and the No. 10 Smithfield Ford team experienced a rollercoaster of a year, ultimately finding success when he locked himself into the 2021 NASCAR Cup Series playoffs with his July 18 victory at New Hampshire Motor Speedway in Loudon. He led 46 laps around the flat, 1.058-mile oval en route to his third career NASCAR Cup Series win. After a year full of adversity and bad luck, the victory put the No. 10 team, which was 27th in the standings and facing a must-win situation if it was going to compete for this year’s championship, in prime position to earn one of the 16 coveted berths in the 10-race playoffs. Almirola’s award-winning YouTube series “Beyond the 10” captured his entire race day here.
● 2021: Almirola opened the season with a win in his Duel qualifying race for the Daytona 500. A string of horrific luck in the early part of the season, including accidents not of his own doing, loose wheels and mechanical failures, plagued Almirola before momentum picked back up when he earned the inaugural pole at Nashville with a fourth-place finish to top it off. He went on to race his way in to the NASCAR All-Star race and, in mid-July, solidified his playoff appearance with the win in New Hampshire. Overall, Almirola has earned one win, one pole, two top-five finishes, four top-10s and has led 51 laps.
● Smithfield celebrates 10 years of partnership with Almirola this season with a special campaign called Taste Victory. As one of the most active partners in NASCAR, Smithfield engages fans all year long by hosting a microsite that provides the opportunity to win when Almirola wins or finishes inside the top-10. When Almirola wins, one fan wins $10,000, and 10 fans win a gift card for each top-10 finish. The microsite also doubles as an Aric Almirola fan page and entertainment source where fans can get behind the wheel of the No. 10 Smithfield Ford with a custom racing game, and learn more about Almirola with fast facts, favorite recipes and custom content about his life on and off the track. Visit www.tastevictory.com to learn more. Thanks to Almirola’s Feb. 11 win in his Duel qualifying race for the Daytona 500 and his July 18 win at New Hampshire, two lucky fans have already won $10,000 each.
● This year marked Almirola’s fifth career playoff appearance and fourth in a row since joining SHR. While he didn’t advance beyond the Round of 16, he has set his sights on a top-15 points position after the checkered flag drops at the season finale Nov. 7 at Phoenix Raceway. Fans and media can watch the “Beyond the 10” episode of his playoff run on YouTube here.
● Career Stats: Almirola has career totals of three wins, two poles, 26 top-five finishes, 83 top-10s and 893 laps led in 387 NASCAR Cup Series starts.
● Beyond the 10 YouTube Series: In 2021, Almirola continues to share his life beyond the No. 10 Ford with season three of his award-winning YouTube series. Fans and media can subscribe on YouTube to see Almirola’s personality on and off the track. Episodes have already featured life as a dad, a husband and an athlete, and it gives fans a unique perspective on what goes on in the life of a professional NASCAR driver. Fans can also follow Almirola’s social media channels: @Aric_Almirola on Twitter and Instagram, and @AricAlmirola on Facebook. Almirola’s latest Beyond the 10 episode the Almirola family showcases their halloween family tradition.
● Point standings: Almirola is currently 15th in the driver standings with 2,184 points.

What is different about the final race of the season compared to the rest of the season?
“With this being the season finale, everyone is bringing their A game and everyone wants to finish off the season on a high note. I think we’re well on our way to achieving that after our run at Martinsville last weekend. Everything just clicked and everyone did their part. We ran around the top-five at Phoenix earlier this year, too, so we know we can go there with a good setup – especially with practice and qualifying. I’m looking forward to putting an entire weekend together and ending with a top-five run.”

What makes Phoenix so unique?
“Phoenix is just a fast short track. Ever since the repave, it races like a mile-and-a-half, which is different from a Richmond-, Martinsville- or Bristol-type of short track. It’s a fun race and I always look forward to heading out west to Phoenix – especially to cap off the season. There are so many cool things to do around Phoenix, too, like hiking and just enjoying the outdoors. It’s a great place for a championship race.”

What’s the most important thing to be successful at Phoenix?
“You have to have everything at Phoenix. You have to have downforce, grip in your car and good brakes. You have to make sure your car turns well through the center of turns one and two, which is a sharp, banked corner. And then you have turns three and four, which are really fast and sweeping and flat. You’ve got to have a car that’s versatile and is a good compromise for both corners. We had that at Loudon, where we won, and we had it last weekend at Martinsville. ”