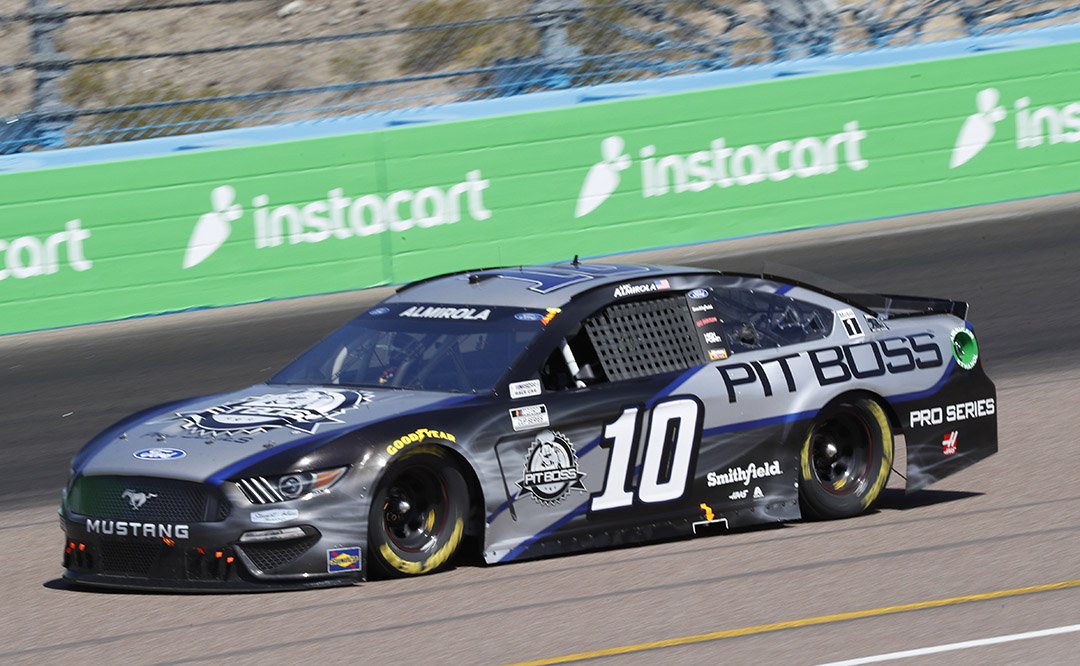 Stage 1 Recap (Laps 1-75):
● Aric Almirola started 32nd and finished 13th.
● The Pit Boss Grills Ford driver raced his way to 25th by lap 15.
● Overall, Almirola noted that the balance was good but that slight adjustments were needed during the lap-30 competition caution.
● Almirola gained five positions on pit road after taking four tires, fuel and an air pressure adjustment.
● During a caution on lap 46, Almirola said the balance of his Pit Boss Grills Ford was headed in the right direction.
● Almirola restarted 12th. He was caught in traffic that pushed him back to 17th but rallied back to 13th while passing cars with fresher tires.
● He pitted at the end of the stage for four fresh tires, fuel and more air pressure adjustments.

Stage 2 Recap (Laps 76-190):
● Almirola started 12th and finished eighth and earned three bonus points.
● Almirola drove his No. 10 Ford to the top-10 on lap 130.
● The Pit Boss Grills Ford driver pitted under green on lap 140 for four fresh tires and fuel.
● After green-flag pit stops cycled through, Almirola was scored in the 10th position.

Notes:
● Almirola earned his first top-12 of the season and his eighth in 21 career NASCAR Cup Series starts at Phoenix.
● This was Almirola’s third straight top-15 at Phoenix.
● Since joining SHR in 2018, Almirola has only finished outside the top-15 once at Phoenix – a lone 22nd-place finish in November 2019.
● Martin Truex Jr. won the Instacart 500k to score his 28th career NASCAR Cup Series victory, his first of the season and his first at Phoenix. His margin over second-place Joey Logano was 1.698 seconds.
● There were seven caution periods for a total of 45 laps.
● Twenty-four of the 38 drivers in the race finished on the lead lap.
● Denny Hamlin remains the championship leader after Phoenix with a 39-point advantage over second-place Brad Keselowski.

Aric Almirola, driver of the No. 10 Pit Boss Grills Ford Mustang for Stewart-Haas Racing:
“Finally, a solid day. Proud of my team. We ran in the top-10 most of the day and had a really good Pit Boss Grills Ford on the longer runs. And then there at the end it turned out to be two short runs. All in all, a great day, turned all the bad races around and almost got a top-10. Thanks so much to Pit Boss Grills and representing the Pro Series on the car. That was fun to run up front, be competitive and get out of here with a solid finish. We made some hay and a little ground on the points situation, and we’re going to have a lot better starting spot and pit selection going to Atlanta. We’ll keep this momentum going next week, where we’re running another Pit Boss Grills Ford.”

Next Up:
The next event on the NASCAR Cup Series schedule is the Folds of Honor 500 on Sunday, March 21, at Atlanta Motor Speedway. The race begins at 3 p.m. EDT with live coverage provided by FOX and SiriusXM NASCAR Radio.