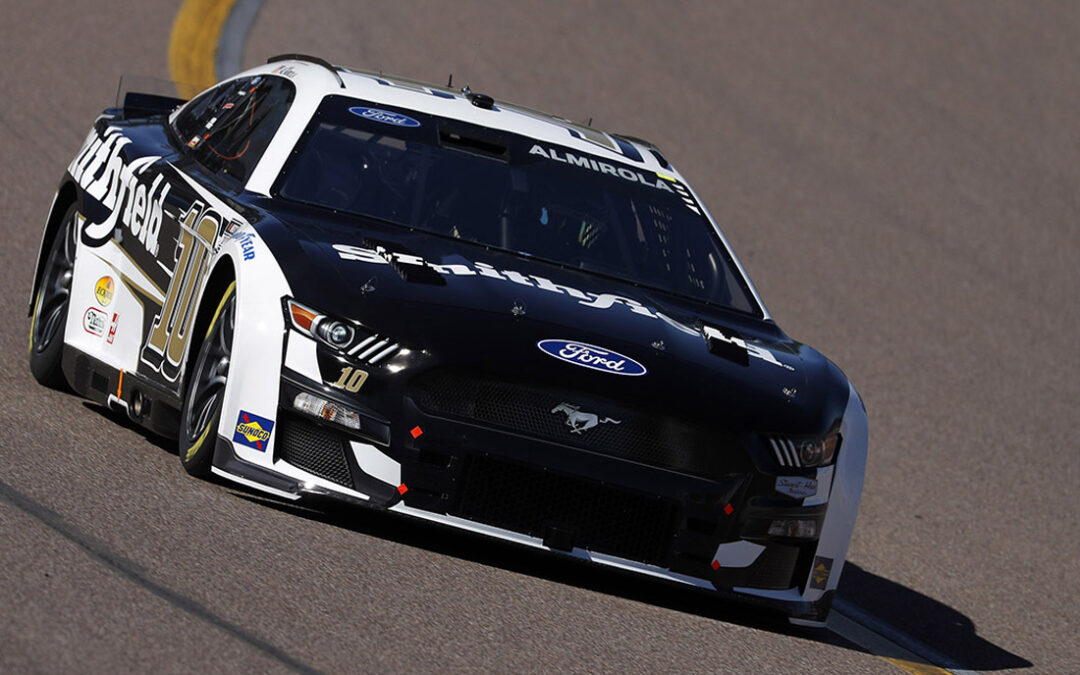 Almirola Notes:
● Almirola earned his fourth top-15 of the season and his 14th top-15 in 23 career NASCAR Cup Series starts at Phoenix.

● This was Almirola’s fourth straight top-15. He finished fifth in the season-opening Daytona 500, sixth Feb. 27 at Auto Club Speedway in Fontana, California, and sixth again in the series’ prior race at Las Vegas Motor Speedway.

Race Notes:
● Briscoe’s margin over second-place Ross Chastain was .771 of a second.

● There were eight caution periods for a total of 52 laps.

● Twenty of the 36 drivers in the race finished on the lead lap.

● Joey Logano leaves Phoenix as the championship leader with a four-point advantage over second-place Kyle Busch.

“That’s unbelievable. I was crying the whole last lap. I mean, this is definitely a team win. I’ve got to thank everyone that has gotten me to this point. Seven years ago, I was sleeping on couches, ready to give up. They gave me an opportunity and it’s led to this. I am so blessed to be driving at the organization, the team, the car that was my hero growing up. To get this 14 back in victory lane, to do it with Mahindra Tractors, their first year in the sport, everybody that’s believed in me. It’s unbelievable.” – Chase Briscoe, driver of the No. 14 Mahindra Tractors Ford Mustang

“It was a good day for us. Restarts weren’t 100 percent our strong point. We had a bit of a brake shake issue that kept pulling the car to the right under braking, so I couldn’t get into corners like I wanted to. Still a good day and the car ran good. I just couldn’t really connect all the corners altogether through the day. Putting an SHR car in victory lane and running inside the top-five all day for us is always a good day.” – Kevin Harvick, driver of the No. 4 Hunt Brothers Pizza Ford Mustang

“Congrats to Chase. So happy for them. We had speed and just fought some balance issues all day, but kept getting our Smithfield Ford better and better. We continue to fight all day to try and be there in the end. I’m so proud of this team for another hard-fought day. We didn’t keep the top-10 streak alive, but we’re still competitive at every track we visit, and that’s all you can ask for. It was a good day for our entire organization. Looking forward to Atlanta next week to keep it going.” – Aric Almirola, driver of the No. 10 Smithfield Ford Mustang

“It was a solid, mistake-free day. We had good long-run speed, but we just couldn’t get it on the short run. Overall, it’s something we can build on, just wish we had a little bit more.” – Cole Custer, driver of the No. 41 HaasTooling.com Ford Mustang

The next event on the NASCAR Cup Series schedule is the Folds of Honor 500 on Sunday, March 20 at Atlanta Motor Speedway. The race begins at 3 p.m. EDT with live coverage provided by FOX and SiriusXM NASCAR Radio.