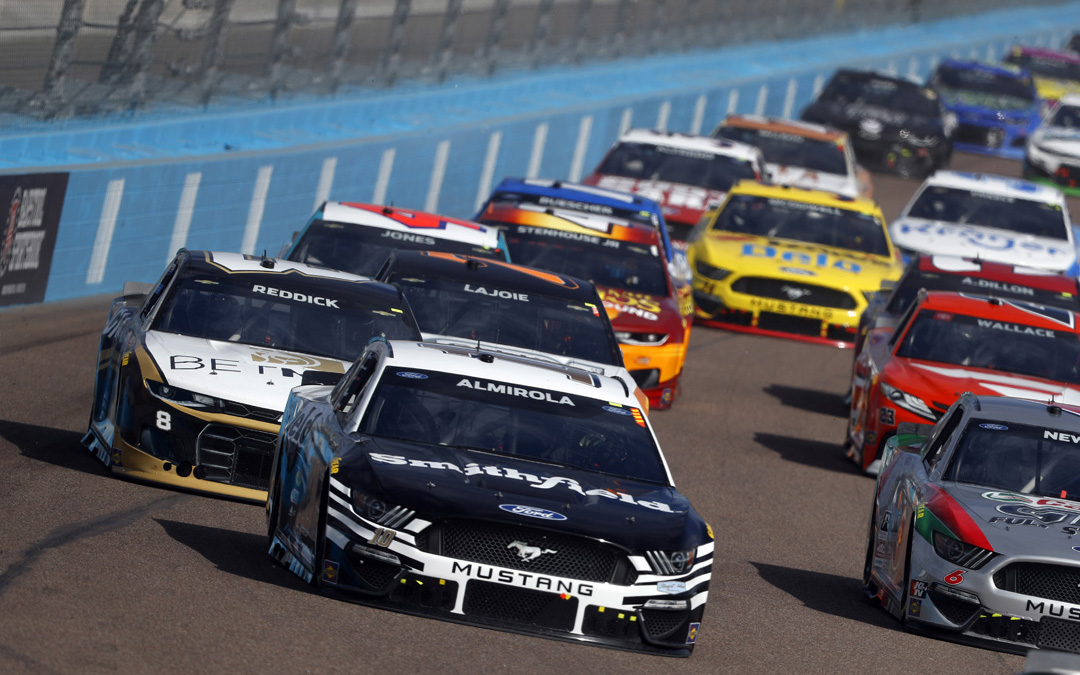 Stage 1 Recap (Laps 1-75):
● Aric Almirola started 18th and finished 12th.
● Almirola raced the Smithfield Ford Mustang to 14th before a caution on lap 15.
● He pitted for four fresh tires and fuel to restart 20th due to multiple cars staying out of the pits.
● The Smithfield driver continued to advance, but he said he could use more side bite and turn in the middle of the exit.
● Almirola pitted at the end of the stage for four tires, fuel and chassis adjustments.

Stage 2 Recap (Laps 76-190):
● Almirola started 12th and finished 14th.
● The Smithfield Ford driver entered the top-10 on lap 95 and raced to ninth on lap 107.
● Almirola pitted for four tires, fuel and adjustments during a lap-130 caution.
● He restarted 12th and raced back to ninth before another caution on lap 140.
● Almirola was served a speeding penalty on pit road and was forced to restart at the rear of the field.
● The Smithfield driver raced all the way back inside the top-15 by the end of the stage.
● He pitted at the end of the stage for four tires, fuel and air pressure adjustments.

Final Stage Recap (Laps 191-312):
● Almirola started 11th and finished sixth.
● Almirola raced back inside the top-10 on the restart and had advanced to seventh on lap 238.
● A caution was called on lap 248 with Almirola in the fifth position.
● The Smithfield driver restarted seventh and was scored eighth before another caution on lap 281.
● He pitted for four tires, fuel and an air pressure adjustment and restarted fifth.
● The No. 10 Smithfield driver raced in and around the top-five before the checkered flag waved.

Notes:
● Almirola earned his fifth top-10 of the season and his seventh top-10 in 22 career NASCAR Cup Series starts at Phoenix.
● This was Almirola’s second straight top-10. He finished sixth in the series’ prior race at Martinsville (Va.) Raceway.
● This was Almirola’s fourth straight top-15 at Phoenix. He finished 11th in the series’ prior visit to the track in March.
● Kyle Larson won the Season Finale 500 to score his 16th career NASCAR Cup Series victory, his series-high 10th of the season and his first at Phoenix. His margin over second-place Martin Truex Jr. was .398 of a second.
● Larson earned his first NASCAR Cup Series championship by virtue of his win. He is the 35th different driver to win the series title.
● There were nine caution periods for a total of 51 laps.
● Only 24 of the 39 drivers in the Season Finale 500 finished on the lead lap.

Aric Almirola, driver of the No. 10 Smithfield Ford Mustang for Stewart-Haas Racing:
“What a season. What a day. We worked so hard to finish off the season strong, and we ran where this 10 team was capable of running all year. It was such a rollercoaster of a year. We had some really high highs and really low lows. We capped off the season with two sixth-place finishes when we’re running in the midst of the championship-contending playoff drivers, and I can’t be prouder of that after the year we’ve had.”

Next Up:
The 2022 season begins with a non-points exhibition race Feb. 6 at the Los Angeles Memorial Coliseum before kicking off its 36-race slate of points-paying events with the 64th Daytona 500 on Feb. 20 at Daytona (Fla.) International Speedway. FS1 will broadcast the Busch Clash at the Coliseum, and FOX will broadcast the Daytona 500. Each event will be live and can also be heard on SiriusXM NASCAR Radio.