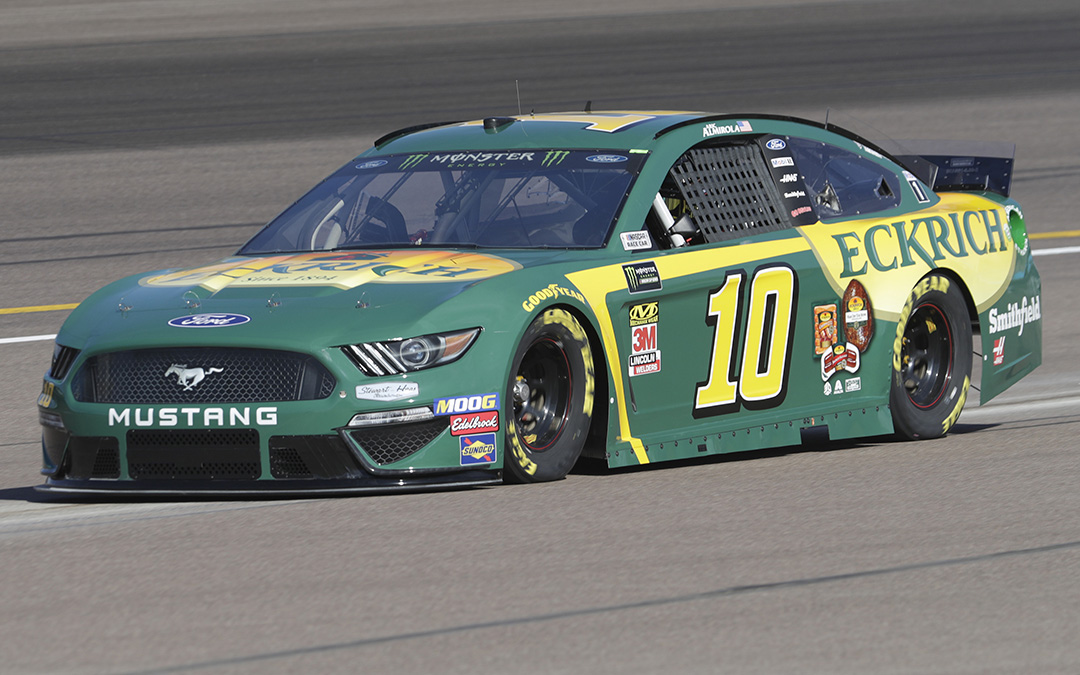 Stage 1 Recap (Laps 1-75):
● Aric Almirola started 11th and finished 12th.
● Running in 12th after 20 laps, Almirola described his No. 10 Eckrich Ford Mustang as having no rear grip.
● Fell to 14th by lap 52. Almirola keyed his mic to say, “Zero roll speed. Just driving through front tires on throttle.”
● Pitted for four tires and fuel with a right-rear wedge adjustment while under caution on lap 69.
● Was 14th for lap-72 restart and picked up two positions to finish the stage in 12th.
● Stayed out at the conclusion of the stage to maintain track position.

Stage 2 Recap (Laps 76-150):
● Almirola started ninth and finished 14th.
● Settled into 11th by lap 90 and radioed on lap 106 that he was loose under braking into turn three, but was tight everywhere else.
● “The harder I try, the worse it gets,” said a 12th-place Almirola on lap 126 about the handling of his Eckrich Ford Mustang.
● On lap 136, Almirola added: “Chattering the tires. It gets really bad late in a run.” Dropped to 14th.
● Pitted for four tires and fuel at the end of the stage, and also inserted a spring rubber into the right-rear to aid in the car’s handling.

Final Stage Recap (Laps 151-312):
● Almirola started 20th and finished 22nd.
● Despite having pitted before the stage, Almirola still experienced a tight racecar that was chattering its tires.
● Took advantage of caution period and pitted on lap 168 for four tires, fuel and a track bar adjustment.
● Remained 20th for lap-173 restart.
● Climbed to 18th by lap 196, but Almirola reported that his Eckrich Ford Mustang was back to being too tight and not turning.
● Even with a racecar that was too tight, Almirola found ways to gain positions. He was 16th with 100 laps to go.
● Lost a lap to leader Denny Hamlin on lap 225 while running 17th.
● Made scheduled, green flag pit stop on lap 236 for four tires and fuel.
● As pit stops cycled through, Almirola rose to 11th by lap 256 and was in position to score a top-10.
● But on lap 286, Almirola keyed his mic and yelled, “Flat tire!” He had a flat right front and was forced to pit under green for four tires and fuel.
● The unscheduled, green flat pit stop dropped Almirola to 22nd and put him two laps down, and with less than 25 laps remaining, it was a position from which he could not recover.

Aric Almirola, Driver of the No. 10 Eckrich Ford Mustang:
“We fought hard all day, and even though we weren’t where we needed to be from a handling standpoint, we managed to get up to 11th to where a top-10 was possible. But then we got a flat tire and that was it.”

Next Up:
The next event on the Monster Energy NASCAR Cup Series schedule is the season-ending Ford EcoBoost 400 on Sunday, Nov. 17 at Homestead-Miami Speedway. The final race of the 10-race playoffs starts at 3 p.m. EST with live coverage provided by NBC and SiriusXM NASCAR Radio.