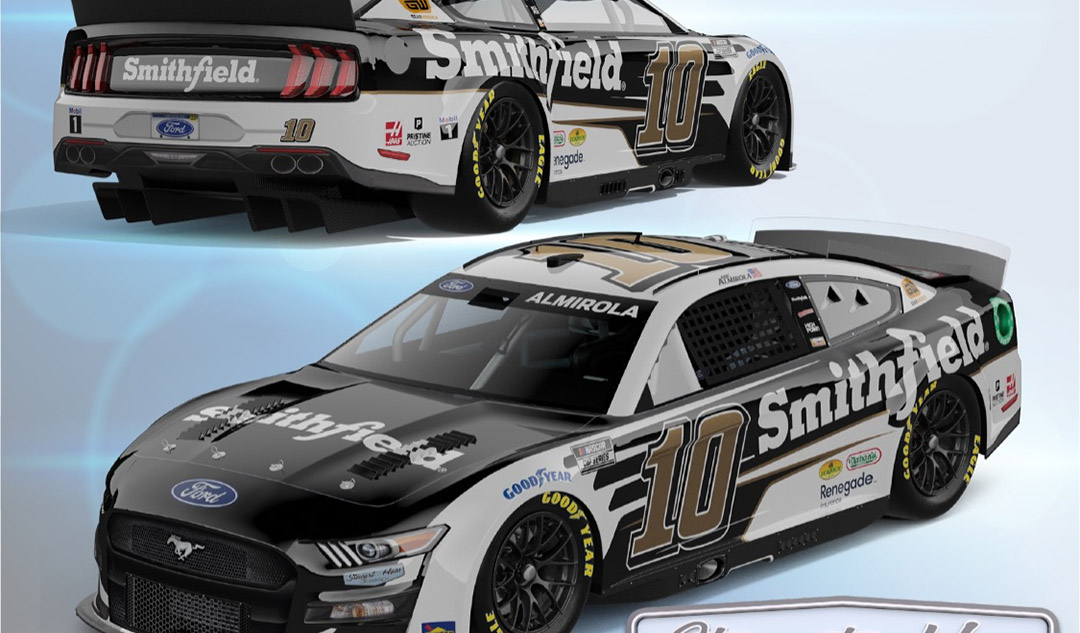 Notes of Interest
● History at Phoenix Raceway: Phoenix is the track where Almirola has arguably been most consistent in recent years. In his last eight starts there, he has earned five top-10 finishes – two of those being top-fours. He’s also led 33 laps at the mile oval. Almirola qualified fifth and finished 12th in this year’s March 13 race there.

● 2022 Season: Through 35 races, Almirola has earned two top-five finishes, seven top-10s, and has led 81 laps. He also qualified on the pole for the first time this season at Bristol (Tenn.) Motor Speedway in September. His average finish of 17.7 and seven top-10s this season have bettered his totals for all 36 points-paying races in 2021.

● Driver Points: Almirola arrives at Phoenix 20th in the driver standings with 743 points.

● Smithfield Foods is an American food company with agricultural roots and a global reach. Its 63,000 team members are dedicated to producing “Good Food. Responsibly.®” Smithfield is one of the world’s leading vertically integrated protein companies. The company has pioneered sustainability standards for more than two decades, including its industry-leading commitments to become carbon negative in U.S. company-owned operations and reduce GHG emissions 30 percent across its entire U.S. value chain by 2030. Smithfield believes in the power of protein to end food insecurity and has donated hundreds of millions of food servings to local communities. Smithfield boasts a portfolio of high-quality iconic brands, such as Smithfield®, Eckrich® and Nathan’s Famous®, among many others.

● Almirola was the only NASCAR Cup Series driver to finish in the top-10 in this year’s opening three races. He finished fifth in the season-opening Daytona 500 at Daytona (Fla.) International Speedway, sixth at Auto Club Speedway in Fontana, California, and sixth at Las Vegas. Almirola’s top-10 streak ended with a 12th-place finish at Phoenix despite running inside the top-10 throughout the race.

How would you assess your 2022 season?
“It was definitely a learning year for us as a team and an organization. There were a lot of things we did well and a lot of things we still need to work on. Obviously, we wanted to make the playoffs and were hoping for a win or two. We had a shot in St. Louis and we had a fast Smithfield Ford in New Hampshire before mechanical failure, which put us in a really tough spot to make the playoffs. We started the season really strong, though, and the communication between Drew (Blickensderfer) and I is really good, so we know what we’re capable of when we find the speed. I think we were the only team to start the season with three-straight top-10s. I’m ready to hit the refresh button and start 2023 that way again.”

With your decision to retire at the beginning of the season, and now being back for 2023 with Smithfield, how was your year off the track?
“Like I mentioned, we had a rollercoaster of a year on the track but, I prioritized the balance of my career and my family. It has been such a great year from that perspective because I have been more intentional and more present with my family no matter what happens at the track. For Smithfield and the race team to support me in that means so much.”

It’s the championship race at Phoenix. In past years, non-playoff drivers wouldn’t have their eyes on winning the season-ending race but, with so much parity, is this still and opportunity to win?
“Absolutely. There has been so much parity this year that I think you’ll see a lot of non-playoff drivers leading the championship race. It has happened more this year than ever before. The guys in the final four this year will have to take that into consideration, too. You’re not just racing against three other guys. You’re up against at least 25 other competitive cars that will still race you hard because they have the speed. I think you’ll see a much different season finale than we’re used to and I hope it puts on a great show for the fans.”