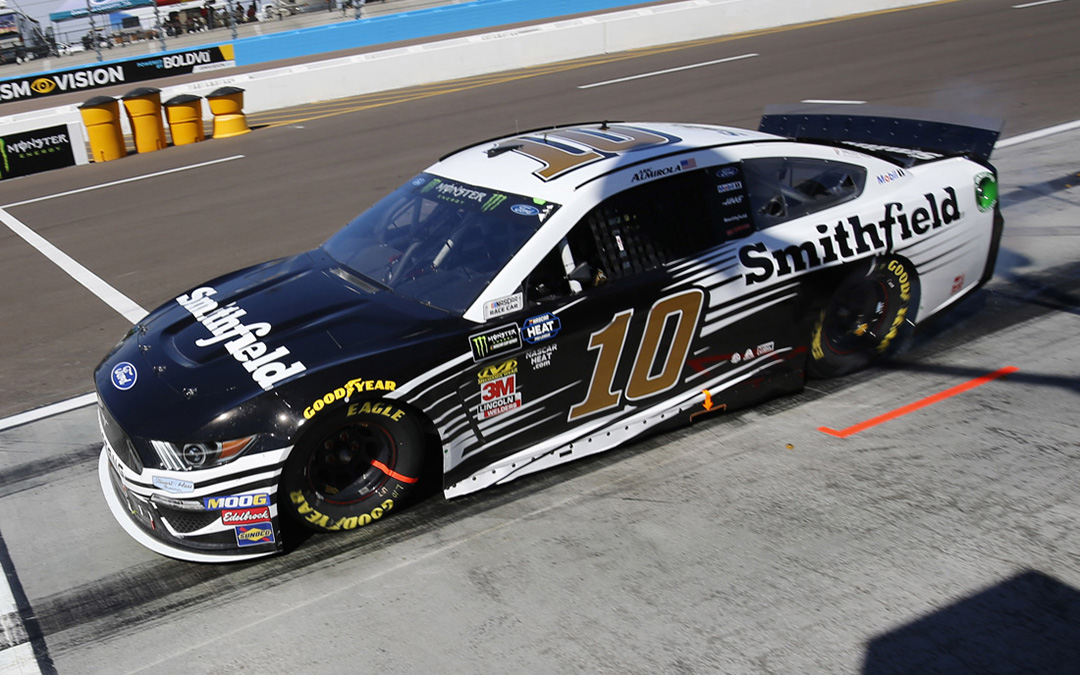 Stage 1 Recap (Laps 1-75):
● Started 14th and finished second to earn nine bonus points.
● The Smithfield Ford raced to the top-10 by lap 38 before a caution was called a lap later.
● Almirola ran as high as fourth place until another caution was called on lap 63. The No. 10 team opted not to pit in order to gain the maximum amount of stage points. They restarted from second place and battled the No. 22 car to hold the second position before Stage 2 ended.
● He pitted for four fresh tires, fuel and air pressure adjustments at the conclusion of the stage.

Stage 2 Recap (Laps 76-150):
● Started 21st and finished 12th.
● Almirola gained six positions by lap 104 and rejoined the top-15.
● At this point, the No. 10 Ford team was consistently recording the fastest laps in the field.
● Almirola continued to note tight-handling conditions and pitted at the end of the stage for four tires, fuel and adjustments.

Stage 3 Recap (Laps 151-312):
● Started 10th and finished fourth.
● He began the final stage racing in and around the top-10 and said his Ford Mustang needed more turn in the corners.
● After a caution on lap 193, Almirola pitted the No. 10 Ford for four tires and fuel. He climbed to seventh during the restart.
● Crew chief Johnny Klausmeier radioed Almirola to the pits for two tires and fuel during a lap-220 caution. He came off pit road fourth.
● Almirola gained the lead on the restart while yet another caution was thrown for a spin by the No. 47 car.
● He held the lead for 26 laps and continued to note tight-handling conditions on lap 252.
● In effort to save fuel and set the Smithfield Ford team up for victory, Almirola raced strategically and fell to fourth. He was able to save enough fuel to last the entire green-flag run and earn the team’s third consecutive top-10 of the season.

Notes:
● Almirola earned his first top-five and third top-10 in four races this season and his second top-five in 17 career Monster Energy NASCAR Cup Series starts at ISM Raceway.
● Almirola’s fourth-place finish equaled his previous best finish at ISM Raceway – fourth in last November’s Can-Am 500k.
● Almirola finished second in Stage 1 to earn nine bonus points.
● Almirola led once for 26 laps – his first laps led at ISM Raceway.
● This was Almirola’s third straight top-10 of the 2019 season.
● Kyle Busch won the TicketGuardian 500k to score his 52nd career Monster Energy NASCAR Cup Series victory, his first of the season and his third at ISM Raceway. His margin of victory over second-place Martin Truex Jr. was 1.259 seconds.
● There were nine caution periods for a total of 67 laps.
● Only 16 of the 36 drivers in the TicketGuardian 500k finished on the lead lap.
● Busch leaves ISM Raceway as the championship leader with a six-point advantage over second-place Joey Logano.

“We had a good Smithfield Ford Mustang, but we’re just not quite as good as we need to be. We still have work to do, but I’m really proud of everybody at Stewart-Haas Racing. We keep chipping away. That’s three top-10s in a row, our first top-five of the year, so we’re getting there. Our cars are getting a little better, but we just have to keep working and keep finding more speed. We have a great race team, and we’ll continue to improve on what we’ve got, so we’ll just keep working. Our Smithfield Ford Mustang was decent but just not quite good enough.”

The next event on the Monster Energy NASCAR Cup Series schedule is the Auto Club 400 on Sunday, March 17 at Auto Club Speedway in Fontana, California. The race starts at 3:30 p.m. EDT with live coverage provided by FOX beginning with its prerace show at 3 p.m.