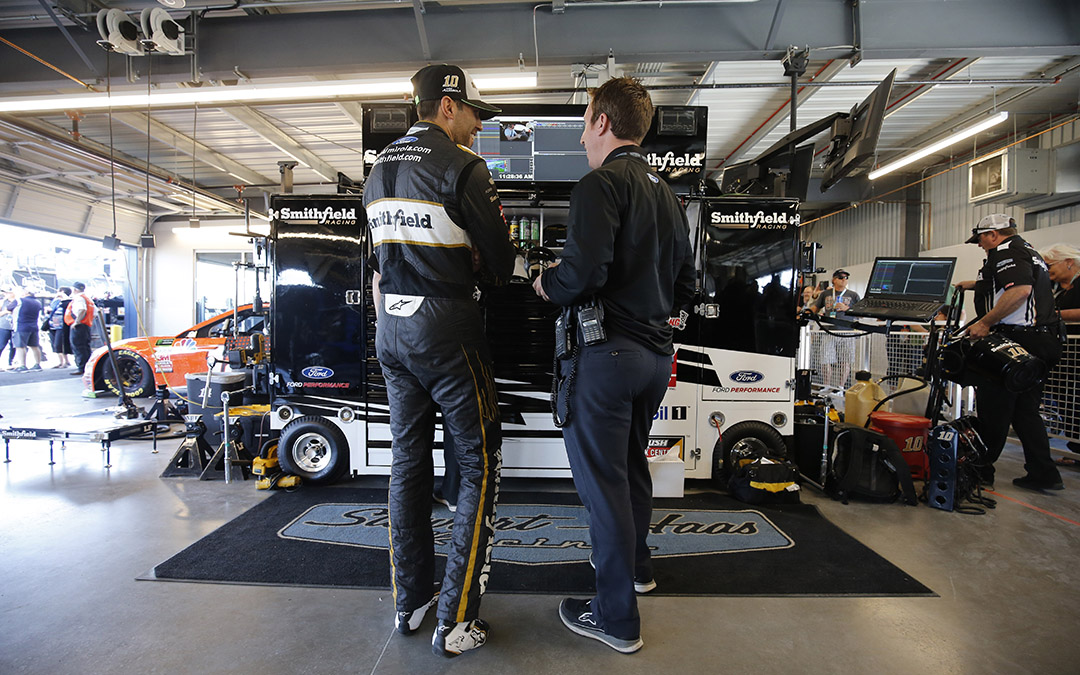 Stage 1 Recap (Laps 1-75):
● Aric Almirola started Stage 1 in the 18th spot and finished it in 11th.
● The Smithfield driver worked his way up through the field and reported on lap 25 that he “needed help rolling.”
● The entirety of the stage was run under the green flag.
● The Round of 8 contender pitted during the stage break for fuel, four tires and adjustments to help the No. 10 machine. The pit stop resulted in a 13th-place restart for Almirola in Stage 2.

Stage 2 Recap (Laps 76-150):
● Almirola started Stage 2 in 13th and ended it in 10th.
● The first caution of the race was displayed on lap 96 while Almirola was in 12th. Crew chief John Klausmeier made the call for the No. 10 machine to stay out on the track and restarted in ninth.
● The second caution of the race was displayed on lap 135, and Almirola came down pit road for fuel, four tires and adjustments once again. He restarted 13th on lap 140.
● The Tampa native finished Stage 2 in 10th.
● During the Stage 2 break, Almirola visited pit road for two right-side tires and fuel to start the final stage in seventh.

Final Stage Recap (Laps 151-312):
● Almirola started the final stage seventh and ended it in the fourth position.
● On lap 170, Almirola reported the Smithfield Ford was “very loose to get going,” and after slipping back to 10th he worked his way back up to eighth.
● The 34-year-old made a scheduled green-flag pit stop on lap 226 from the seventh position. Unfortunately, the caution came out just after Almirola pitted.
● He restarted 16th on lap 236 and worked his way up to 13th when the caution came out on lap 240.
● The seventh caution came out with 49 to go while Almirola was in the 10th position. He came down pit road for fuel, four tires and adjustments. After a brief red flag and with varying pit strategies among competitors, Almirola restarted 12th on lap 269.
● Just after the restart, a multicar accident brought out the caution again as Almirola ran in seventh.
● The green flag dropped again on lap 275, and the Ford driver had maneuvered his way up to fourth when the ninth caution came out on lap 287. Almirola stayed out during caution and restarted fourth. He raced teammate Kevin Harvick for position until the 10th caution of the race came out on lap 296.
● Almirola restarted in the second position on lap 300 with his best shot to win the race and move on to the Championship 4 at Homestead. Unfortunately, he was overtaken by another competitor and ultimately finished fourth when the remainder of the event ran under the green flag.

Notes:
● This was Almirola’s fourth top-five and 16th top-10 finish of 2018. This is the most top-fives Almirola has earned in a single season in the Monster Energy NASCAR Cup Series.
● Almirola earned his first top-five in 16 career Monster Energy NASCAR Cup Series starts at Phoenix. His previous best finish at Phoenix was seventh, earned in the series’ March race at the track.
● Almirola finished 10th in Stage 2 to earn one bonus point.
● Kyle Busch won the Can-Am 500k to score his 51st career Monster Energy NASCAR Cup Series victory, his eighth of the season and his second at Phoenix. His margin of victory over second-place Brad Keselowski was .501 of a second.
● There were 10 caution periods for a total of 61 laps.
● Only 15 of the 39 drivers in the Can-Am 500k finished on the lead lap.

Aric Almirola, Driver of the No. 10 Smithfield Ford Fusion for Stewart-Haas Racing:

“I thought we were a seventh- to sixth-place car, and that’s what I thought we were (on Saturday), too. Johnny and all these guys fought their guts out, and I fought my guts out inside the racecar and gave it everything we had. We took a seventh- or eighth-place car and, the next thing you know, we were in position to win the race. I’m just really thankful for this group, and these guys on the Smithfield team are awesome. This is our first year working together. You look at all the teams we’re racing and they’ve got four, five, six, seven years working together, so what we’ve accomplished in one year is a hell of a lot. Right now all I can think about is being inside of Kyle down there in the new one and two and just not being able to get the power down to get up beside him. It’s bittersweet. It was a good day for us, but today we needed to win – and we didn’t win.”

Next Up:
The next event on the Monster Energy NASCAR Cup Series schedule is the season-ending Ford EcoBoost 400 on Sunday, Nov. 18 at Homestead-Miami Speedway. The final race of the 10-race playoffs starts at 3 p.m. EST with live coverage provided by NBC beginning at 1:30 p.m.