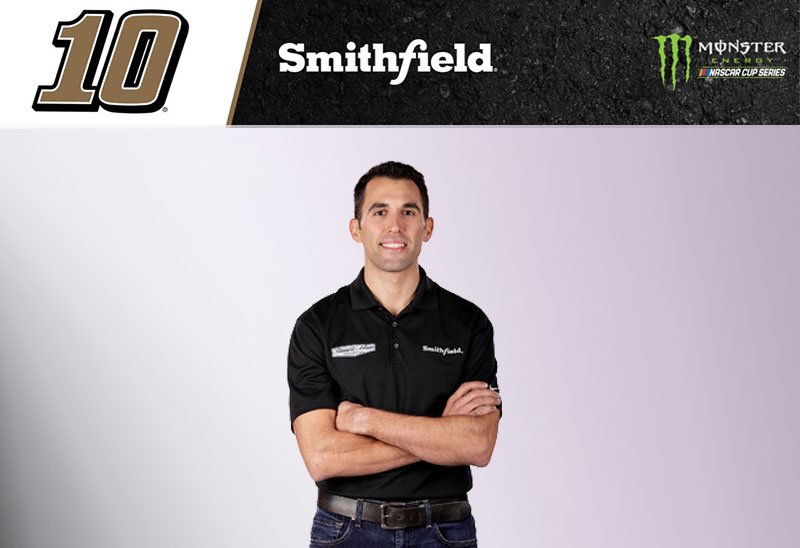 KANNAPOLIS, North Carolina (Feb. 6, 2018) – The 2018 Monster Energy NASCAR Cup Series kicks off at Daytona (Fla.) International Speedway with the 60th running of the Daytona 500 with Aric Almirola piloting the No. 10 Smithfield Ford Fusion for Stewart-Haas Racing (SHR). This year marks the 11th season behind the wheel of a stock car in NASCAR’s most elite series for the native of Tampa, Florida.

Almirola reunites with several former co-workers from his past, including John Klausmeier, the leader of the No. 10 team whose 2018 season will be his first as a full-time crew chief calling the shots from atop the pit box. The 37-year-old from Perry Hall, Maryland, spent the last several seasons as an engineer under longtime Cup Series crew chief and current SHR production manager Tony Gibson. Almirola will pilot the black-and-white Ford Fusion with Smithfield branding for Daytona Speedweeks and for a majority of the season.

Smithfield, a brand of Smithfield Foods, which is based approximately five hours northeast of SHR headquarters in Smithfield, Virginia, enters its seventh season with Almirola and first with SHR. Founded in 1936, Smithfield is a leading provider of high-quality pork products, with a vast product portfolio including smoked meats, hams, bacon, sausage, ribs, and a wide variety of fresh pork cuts.

Almirola is the newest driver among SHR’s four-car contingent, joining veterans Clint Bowyer, Kurt Busch and Kevin Harvick. The 33-year-old driver is looking forward to getting to know his teammates better and being an integral part of the two-time championship-winning organization.

“Obviously, we see each other every week at the racetrack and there is that peer relationship, acquaintance relationship,” Almirola said. “I am the kind of guy who for the most part is pretty easy to get along with. I don’t create a lot of turmoil or animosity. I’ve never had negative interactions with any of my new teammates. I can’t say that I’m friends with them or have a great relationship with them, but that is coming. I plan that, by a few races into the season, I’ll have a great relationship with those guys. I want to help. I want to be part of the team and contribute to Stewart-Haas Racing and help put banners up inside the shop. I want to be a contributing factor to the race team. I am a firm believer that high tide raises all ships. If I can go and do my part and do my job and contribute, then hopefully we will all run better together.”

Almirola has found himself in victory lane at the 2.5-mile Daytona superspeedway multiple times. His Cup Series win there came in July 2014. He led 14 laps and captured the win in the rain-shortened race. Most recently, he led the most important lap – the final one – in the NASCAR Xfinity Series race in July 2016 at the high-banked superspeedway. Even though he’s accomplished his goal of winning at his home track, Almirola looks to add the famed Harley J. Earl trophy to his collection.

“Everybody loves to go to Daytona, but for me it has a little extra special meaning because I grew up in Tampa, Florida,” he said. “It’s just a couple of hours away across the state on Interstate 4. I grew up as a kid dreaming about racing at Daytona. Not only do I now have that privilege, but I’ve been fortunate enough to go to victory lane. I haven’t done it in February yet, though, and winning the Daytona 500 is the ultimate – you’re forever the Daytona 500 champion.”

While this year’s Daytona Speedweeks mark the first time Almirola and the No. 10 crew will work together in an official race capacity, the Smithfield crew tested Jan. 9 and 10 at Texas Motor Speedway for the first time in a two-day Goodyear tire test.

Rejuvenated for the 2018 season, Almirola spent most of his free time during the offseason visiting the SHR shop on an almost daily basis in preparation for his seventh full-time season piloting a 3,300-pound vehicle around racetracks throughout the United States. In addition to visiting with his new coworkers at SHR, Almirola has been busy with preseason media, including visiting the Miami area in mid-January to promote the Daytona 500. Smithfield also participated in the media tour by donating $6,010 to Feeding South Florida – 60 signifying the 60th running of the Daytona 500, and 10 signifying the number adorning Almirola’s Ford Fusion. Between the two busy Daytona weekends, the Florida native will be returning Tuesday, Feb. 13, to Pierce (Fla.) Middle School in Tampa, where Almirola’s parents met and attended.

How do you feel going into this season with a new team?

“I’ve been through six full seasons in the Cup Series and they’ve been average, so I’ve got a new opportunity and a new chance in my career to go out and prove what I’m capable of. I’m so excited about this opportunity with Stewart-Haas Racing and having Smithfield as the sponsor, and continuing to drive Ford Fusions. I’m so fired up about my opportunity to go out this year and perform at a high level every week.”

You have a little history working with your new No. 10 team crew chief, John Klausmeier. Can you provide background on that relationship?

“I had the opportunity to work a lot with Johnny at Dale Earnhardt Inc. He kind of headed up the engineering group for all of the tests. We would go and test what seemed to be like every week back when you could test all the time. I’ve had a relationship with him that dates all the way back to 2007. For us to come full circle is neat, and for him to get this opportunity to be a full-time crew chief, he certainly deserves it. He’s a very smart, talented engineer and has a passion for racing. I’m excited for him as much as I’m excited about my opportunity. We get along great, we’re young, we’re like-minded people and we both enjoy similar things and each other’s company.”

You’ve worked with Tony Stewart before. How does it feel to work with a legend and under his leadership?

“Tony has been great to me. From the time I moved to North Carolina in 2004 – he really took me under his wing. I started driving a Late Model for Joe Gibbs Racing and he was someone that I really looked up to, and he befriended me. At 19 years old, he took me under his wing and would let me go test his Cup car with Greg Zipadelli as his crew chief. He really got me started driving the stock cars and gave me the confidence that I could do it. He believed in me and that was big for me. Through the years our friendship has really grown and, finally, we now have the opportunity to work together again. I’ve been wanting to drive for Stewart-Haas Racing for a while now. They’ve won championships and a lot of races in their short existence as a team.”

How has the transition been for you to Stewart-Haas Racing?

“The transition to Stewart-Haas Racing has been really easy. They have so many talented people that they just make the transition easy. Everybody from the marketing and PR side to the personnel on the shop floor and the guys on the team. It has been great. That transition has been fun. It has been easy, fun, all of the above. I have just been really looking forward to getting to the racetrack to go race. Changing teams is a big undertaking. I would say that the most challenging thing has been learning 380 employees’ names and faces. That is one of the most challenging things. Besides that, just all the little things like getting your seat right, and going and trying to work with a new team and new pedals and new seat and seat insert – all those things to make sure I am comfortable when the season starts inside the racecar.”

In addition to one Cup Series victory at Daytona, Almirola also has one NASCAR Xfinity Series win at the restrictor-plate track. It came while piloting the No. 98 Ford Fusion in July 2016.
Almirola’s Xfinity Series statistics at the 2.5-mile track totals one top-five, three top-10s and 12 laps led in nine starts.

Crew chief Johnny Klausmeier is in first full-time season as a Cup Series crew chief. The Perry Hall, Maryland, native transitioned from an engineer to Almirola’s crew chief for the 2018 season. Klausmeier has one win as a substitute crew chief while filling in for Tony Gibson at Pocono (Pa.) Raceway in June 2016. As a race engineer at SHR, Klausmeier has worked with drivers Ryan Newman, Danica Patrick and, most recently, Kurt Busch.

Daytona is the first race weekend that Almirola will hit the track in an official capacity with the No. 10 team. However, the Smithfield team had a successful Goodyear tire test Jan. 9 and 10 at Texas Motor Speedway in Fort Worth.

During Daytona Speedweeks, Almirola will also compete in the NASCAR Xfinity Series. He will pilot the No. 98 Smithfield Ford Fusion for the newly merged Stewart-Haas Racing with Biagi-DenBeste team. Richard Boswell will be crew chief for the part-time Xfinity Series effort this season. Almirola’s teammate for the 120-lap event will be the team’s full-time driver Cole Custer in the No. 00 Haas Automation Ford Fusion.

Tuesday, Feb. 13, from 2 to 4 p.m. EST, Almirola will visit Pierce Middle School in Tampa. The father of two will interact with honor roll students at a pep rally. In addition, Almirola and attendees will participate in an obstacle course, and students will take home items donated by Smithfield. The event is open to the media.

Friday, Feb. 16, Almirola and SHR co-owner, Tony Stewart, will join Smithfield, a brand of Smithfield Foods, at the Winn-Dixie supermarket located at 1541 Nova Road in Holly Hill, Florida. The event begins at 10 a.m. EST with Almirola and Stewart helping Smithfield present a protein donation to the Second Harvest Food Bank of Central Florida as part of the company’s 2018 Helping Hungry Homes® hunger-relief tour. The event is open to the media.